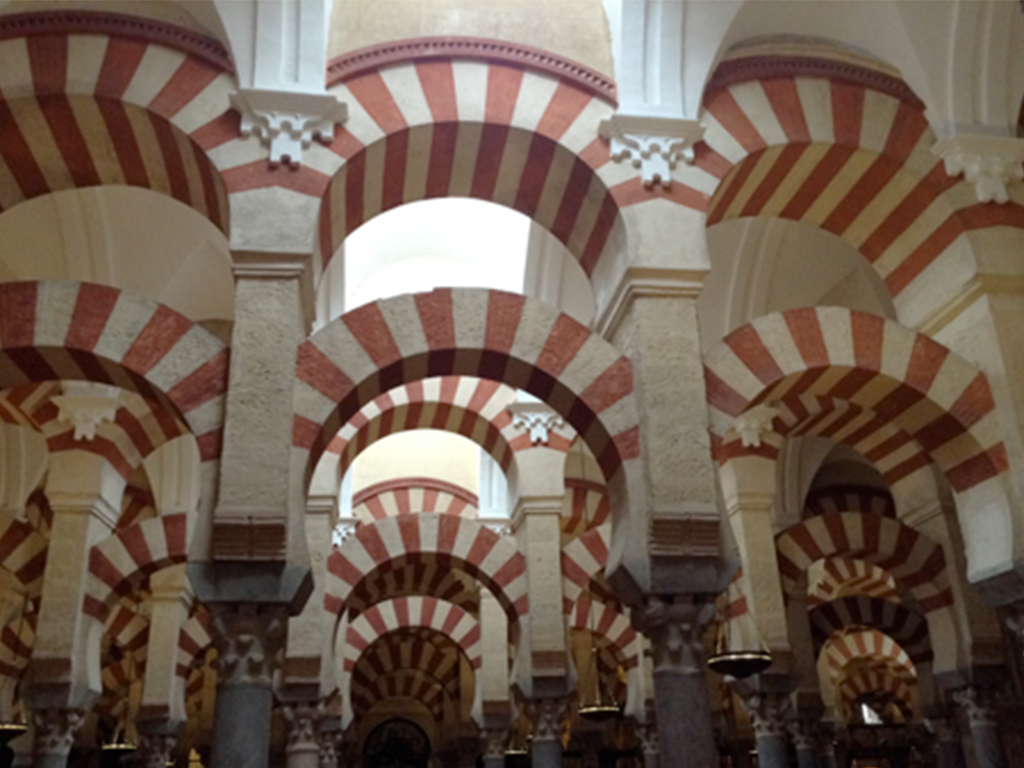 The interior design of the Mosque-Cathedral.

Al-Andalus: The Mosque-Cathedral and the Conscience of History (IV)

As we set foot into the Mosque-Cathedral, on the right-hand side of the entrance is an old washbowl, or what is popularly called a sink. It is engrained into the wall. It was probably used for ablution when the building was still a mosque. As we stood inside the magnificent structure of the Mezquita, Christina started narrating the history of the mosque.

Christina has a mastery of the story of the Mezquita; she explains it with the erudition of a scholar, the enthusiasm of a historian and the emotional vibrancy of a nationalist. She was courteous in her explanation, but firm in her attachment to the mosque turned cathedral. Christiana told us about the role of Caliph Abderrahman III in building the Ummayad mosque, the expansion the mosque went through at various times, and how Islam as a civilisation contributed to the development of arts and architecture in Andalusia.

As she was explaining, there was deep silence among the tourists listening to her. It was emotional, but the feeling of entitlement to this important structure among both Muslims and Christians cannot be missed.

As the tourists, both Muslims and Christians, went round the Mezquita, the feeling of entitlement by members of both faiths was apparent. “It was difficult, wasn’t?” said Christina at a point, as she explained the struggle that took place between the Muslim leaders of Andalusia and the Christian leaders who reconquered Cordoba and turned the Mezquita into a cathedral.

One of the areas of attraction in the mosque is the Mihrab, which is a niche area showing the Qibla (direction to the Kaaba in Makkah, where all Muslims face during prayer). The Mihrab in the Mosque-Cathedral suggests so many things about Islamic civilisation in Muslim Spain. It shows how advanced the Muslim world has been in the area of arts. It shows the level of thinking and advancement in knowledge at the time. The calligraphy that decorates the interior part of the Mihrab, with verses of the Qur’an ornamenting the entire wall, tells you about a society that has knowledge, arts and culture embedded in its DNA.

In relation to the advancement on knowledge and culture, which the Cordoba mosque symbolises, please permit to quote at length the contribution of the historian, Tim Wallace-Murphy who states in his classic work, What Islam Did For US: Understanding Islam’s Contribution to Western Civilisation.

“Cordova eventually became the dominant centre of Islamic culture during the ninth century. The phases of construction of its extraordinary mosque, which became the second largest mosque in all of Islam, reflect the cultural changes that took place between 785 and 980.”

Wallace-Murphy goes on to state that, “in Cordova, Caliph al-Hakkam created a library of 400,000 books which were indexed in 44 catalogues, and he added his own commentaries to many of these volumes. Thus, Cordova became one of the greatest libraries in Europe, second only to the greatest in the world located in Baghdad at the heart of the Islamic empire. This almost insatiable passion for learning, stimulated the production of between 70,000 and 80,000 bound volumes each year, which not only reflected local demand but also demonstrated the country’s capacity for a phenomenal high-volume, top quality production, many centuries before the invention of printing. Sciences, such as geography, agriculture and irrigation, astronomy, medicine and mathematics were actively encouraged, as was the serious study of philosophy based principally on classical Greek thought.”

Tim Wallace-Murphy adds that “Much of the classical knowledge of ancient Greece that we now treasure and take for granted would have withered away had it not been preserved and enhanced by Islamic scholars.” He concludes that, “the well-attended and richly endowed colleges of Andalusia were later to provide a model and template for those founded in Oxford and Cambridge in England.” (pp.108-109.)

Inside the Mihrab, as Christina told us during the tour, is the seclusion room, preserved for the Caliph. The Caliph, who leads the prayer, uses the room to engage in total devotion to Allah. As we walked from the Mihrab area, we moved to exclusive area covered in glass. Inside were white triangular stones with Arabic inscriptions on them. ‘What is this’, we asked. “This section is about the people who built the mosque,” said Christina. Each builder, during the time, would write his name so that the amount work he had done could be identified, and therefore receive payment accordingly. Interestingly, the names have been preserved, and so the heroes who built this structure, which is now a UNESCO heritage site, can still be remembered.

The Mosque-Cathedral has undergone a lot of expansion and changes due the shifting of ownership between Muslims and Christians. Although the mosque operates as a cathedral, the main church was built at the centre of the old mosque. The surrounding walls were used to bury various Christian clergies.

But what is interesting also is the Islamic design that was used in the calligraphy of the sections of the cathedral. Christina told us that even after the Christian re-conquest, Islamic art and calligraphy were the fashion in those centuries. So, even the Christian leaders used Muslim designers for interior decorations.

If I were asked to describe the atmosphere to someone unaware of the historical alterities that took place at the Mosque-Cathedral, I would simply say the Mezquita is the place where you see two contending forces of psychological and physical ownership living together.

Yet, in contemporary times, the two contending forces now represent a great history, rather than a symbol of confrontation. If history has a conscience, it would definitely face one of its stiffest test in the Mosque-Cathedral. Here, I am not referring to conscience at face value, or from a more literal interpretation. I am referring to conscience as a subjective philosophical term that denotes ‘moral knowledge’. A knowledge that is tied to the values, belief system and ethical orientation of the individual.

As we concluded the tour, we realised that we did not pay attention to an important item in our itinerary. We had fed our brains with enough historical diet. It was time to pay attention to our stomach. On the two occasions that I visited the Mosque-Cathedral, we walked down the alleys to nearby restaurants. We ordered Paella rice. It is the Spanish equivalent ofdafaduka in Hausa language, or what is popularly known as Jollof rice in West Africa. The difference though is that Paella rice is a mish-mash of everything. If you love seafood, please don’t miss it. It is cooked with seafood, especially shrimps, lemon and some vegetables. Some restaurants also use chicken. It tastes better when it is freshly made, and eaten after an exhaustive tour like the one we just had. Concluded