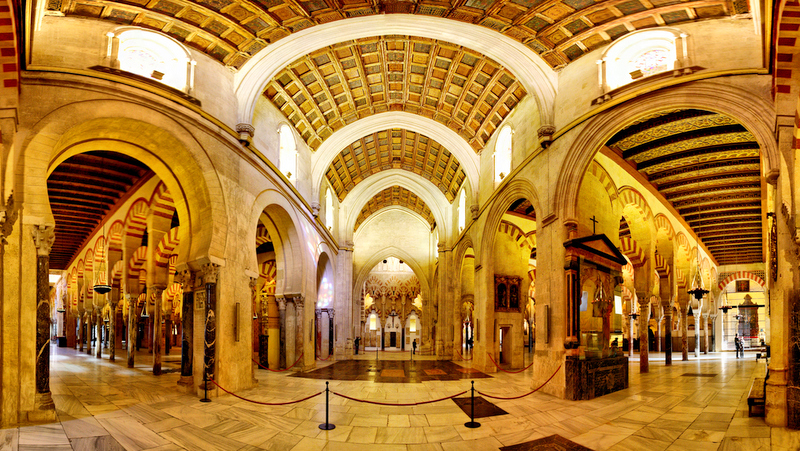 Al-Andalus: The Mosque-Cathedral and the Conscience of History (III)

Just like the Hammam Al-Andalus, some of the historical edifices in Madrid still bear the hallmark of Andalus. These include the famous Almudena Cathedral, having a name clearly resembling that of one of the holiest cities of Islam, Madina Al Munawwara.

Historical accounts suggest Almudena was originally a mosque but was later converted into a Church after King Alfonso reconquered Madrid. Another historical site of interest in Madrid is Palacio Real (the Royal Palace) of the King of Spain, which however is more of a museum now. The King no longer lives there, and it is utilised for ceremonies and visit by tourists.

After visiting some of the remarkable historical sites in Madrid, my attention returned to Cordoba – that magnificent city representing the intellectual hub of Andalusia. I visited Cordoba twice during our study period between 2014 and 2015. The first was with my friend and colleague, Muhammad Ahmad Bello. After experiencing the aura of Cordoba’s historical significance, we agreed that we should bring our family with us on a subsequent visit, so that they could equally witness this interesting adventure. We decided to do this after our graduation ceremony.

The visit to Cordoba was made more interesting by the surprising appearance of my friend and brother, Suleiman Baba Suleiman. Before departing for Madrid, I had called to inform him of my being away for my graduation ceremony. Suleiman noted that he would also be on holiday in the United Kingdom about the same period. I shared many stories with him on my previous visit to Cordoba.

A few hours after defending our final project at the IE business School, Muhammad Bello and I went back to the hotel to have some rest and prepare for the graduation ceremony scheduled for the following day. Guess who was there on our arrival at the hotel lobby? It was Suleiman and his wife checking in at the hotel. That was awesome. A pleasant surprise.

On Saturday December 19, 2015, about five different families embarked on the journey to Cordoba, primarily to visit the most historic site in the city, the Mosque-Cathedral. There is something unique about the Mosque-Cathedral; perhaps, it is only in Cordoba where the mosque means a church, and vice versa. If you meet any resident of Cordoba, ask him about Mezquita (mosque), and he would refer you to the Umayyad mosque, although it is operating as a Church and tourist site at the moment.

During our first visit in 2014, we walked from the train station to Mezquita. There we asked a lady for a description of the Mosque-Cathedral. “You mean the mosque?” she asked, and went on to tell us what Mezquita means to the people of Cordoba. “Everyone here calls it the mosque,” she added.

The Mezquita is a huge building situated in the old city of Cordoba. It is adorned by the minaret, which historically was used by the Muezzin for the call to prayer. Inside the premises, surrounded by a huge wall, partially resembles ancient city walls that you find in Hausa city-states like Kano and Bauchi. While some beautiful orange trees are planted in different parts of the inner wall, there are also several entrances to the Mosque from different alleys surrounding the mosque.

There are numerous shops and restaurants around the building, some of them managed by North African Arabs. The premises was full of tourists from different countries, when we were there, with a number of visitors traveling in groups led by a tour guide providing explanation in different languages.

On arrival at the Mosque-Cathedral, we purchased tickets and security officials at the entrance gave brief guidelines about the dos and don’ts of the tour.

“Are you a Muslim?” one of the guards enquired. “You are welcome to make the tour, but please no prayer should be said aloud.”  He advised.

We then asked if there was a tour-guide who could take us through the mosque and explain the historical monument in English. The security guard looked at the officer next to him, and spoke in Spanish. He walked away briefly, and then returned with a lady named Christina, most likely in her late 40s or early 50s.

“I am a private-tour guide, so you have to pay me”, she said with a smile. “How much” we asked. “It is 50 Euros” she answered. Without hesitation, we asked her to lead, and within seconds we set our foot into the Mezquita.

ECOWAS Court to rule on Dasuki’s case against Nigerian govt