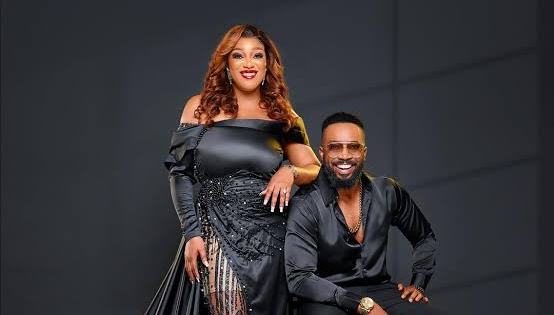 It was all butterflies and roses on Saturday, 19 November, as two Nollywood sweethearts, Peggy Ovire and Frederick Leonard, vowed to stick with each other for the rest of their lives.

In October, the couple, who have been having an on-and-off relationship dating back to 2015, shocked their fans when they announced that they were getting married.

The traditional wedding ceremony in Warri, Delta State, was witnessed by friends and colleagues of the couple. It was themed #meettheleonards

At the ceremony, the couple were asked to play a game by answering intimate questions about each other, like who crushed first, who asked for the first date and who initiated the first kiss and others.

After the game, the actor, popularly known as Film Lord, went down on his knees to profess his undying love to his new bride.

Mr Leonard said that for a while, he knew she was the one for him, but “the human in him fought hard to resist it”.

He said that although they have been together for seven years, in the last 10 years, Peggy is the only person he realised he could not live without.

“As much as we talk love, as much as we want to say fancy things, I like you. You know how I get when you want to drive out and go for an appointment; it’s not like you are doing anything for me.

“I want you around the house. You are usually downstairs monopolising the remote, and I’m upstairs. But knowing that you are downstairs in that house gives me peace,” he said.

The actor explained why he took the decision to marry his bride.

“I wasn’t looking for a wife. I was looking for a soulmate and a best friend. You have been my best friend for the longest. And that is why even when we fight, we cannot live without each other, just because we miss ourselves.

“Baby, I will hold your hands even when we fight. I love you. I was not Film Lord when you met me. But you looked at me and told me you were born a star. Keep acting, and keep doing your thing.

“Today, I’m a national treasure, but when I look at my side, you must be that woman beside me. You are my everything, and I’m happy to call you Mrs Leonard,” he added.

The actress confirmed his words that when she met Frederick, he was not the Film Lord that everybody knows.

She also had a message for those saying she is lucky, noting that she has been through a lot.

“I have stood by this man. But most importantly, I have met a man who says Peggy, I will take care of you, be patient. He promised me that he would spoil me, and Frederick has been spoiling me silly,” she said.

She also encouraged young girls in relationships to be patient with their boyfriends.

“So to every young lady out there, if you have a guy you like. You love him, but he doesn’t have money; please stay. Listen to him. Encourage him. That is all that I have done all these years. It got to a point I thought that Frederick would not marry me. I’m like Frederick; I’m a fine girl; you are wasting my time,” she added.

The duo had an on-and-off thing going, leaving fans guessing about the actual state of things.

Their relationship dates back to 2015 when Mr Leonard confirmed they were dating.

In 2017, Ms Ovire denied romantic affiliation with the actor.

In an interview, the former beauty queen said Mr Leonard was her friend who encouraged her.