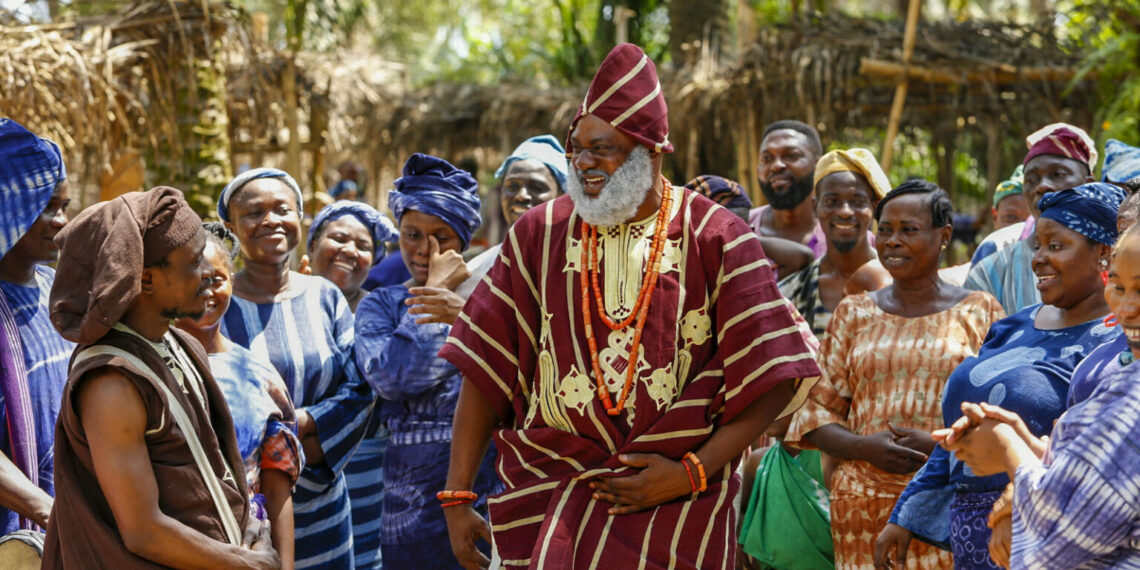 ELESIN at the market. in a scene from the movie

While ‘Elesin Oba’ is filled with many moral lessons, there appears to be a shortfall in its layers and dialogue.

There is no disputing that, so far, 2022 has given us great films such as the binge-worthy ‘Blood Sisters’ and the action-packed ‘Brotherhood’. In addition to showcasing films that are proof of Nollywood’s growth, we have also seen some big production companies embrace the use of indigenous languages in their movies.

Gone are the days when English-speaking Nigerian films dominated the cinema screens and broke box office records. Thanks to movies like ‘King of Thieves, Anikulapo, and the recently released Elesin Oba, the need to tell our stories in our way is becoming more relevant.

Taking a trip down memory lane to when ‘King of Thieves’ was released, several people doubted its success, primarily due to the use of the Yoruba language. Still, the box office figures said otherwise. Anikulapo followed in its footsteps and earned itself the most talked about movie of the year and the top ten record on Netflix’s watchlist.

The latest addition to the significant budget indigenous films’ hall of fame is Elesin Oba, which translates to the King’s Horseman. The film is an adaptation of Wole Soyinka’s play, Death and the Horseman.

Directed by the late multitalented Biyi Bandele, the historical drama based on actual events tells the story of Elesin, the king’s horseman. He is set to perform a ritual suicide to accompany the king on his journey to the afterlife. However, he cannot complete his duty due to unavoidable circumstances, leading to several unfortunate events.

While ‘Elesin Oba’ is filled with many solid moral lessons, it lacks the layers and dialogue that could easily mould it into a masterpiece and earn the Oscar recognition the storyline and concept genuinely deserve.

We are introduced to the old Oyo empire, where a mini party is held. It is immediately revealed that the party’s purpose is to celebrate the king’s horseman, who would commit a ritual suicide later that night. According to tradition, each time a king dies, he is to be accompanied by his favourite dog, horse, and horseman in the afterlife.

Following his forefather’s footsteps, Elesin accepts this fate but is determined to spend his last day on earth to the fullest. In between the merriment, his eyes come across a beautiful virgin lady. Smitten by her beauty, he makes his intention to marry her known, citing the need for him to bear a seed before dying.

Despite subtle discouragements by the Iyaloja, he has a brief marriage ceremony and enjoys a blissful night with his wife.

Meanwhile, on the other side of town, we have Simon Pilkings, a provincial officer who is made aware of the ritual suicide by a police officer, Amusan. Appalled at such “crude” practices, he decides to stop them. So, he arrested Elesin before his soul could depart for the afterlife.

Now locked in a cell, Elesin soon begins to regret getting distracted by the idea of leaving a legacy behind. His imprisonment prevents him from performing his duty, marking him as a symbol of shame to the villagers and his son.

He is consumed with grief and guilt and forced to make a deadly choice.

Ebonylife production continues to set good standards in terms of cinematography. Camera movements are well executed, locations are a good representation of the colonial era (I found myself wondering how they were able to get the building used for the ball), and for the first time, the sound of a Nigerian film is excellent.

The fact that there wasn’t any underlying distracting background music was a breath of fresh air from the several movies released this year.

The screenplay is applaudable for a film that was adapted from a play. The dialogues were spot on and grounded in Yoruba traditions. A list of favourite scenes includes the ones where the villagers chant and the conversations between Iyaoloja and Elesin. The former was mainly because it reminded me of how rich our culture is, and the latter because it showed the dynamic that existed between both characters.

Costumes are also a significant element of the film. The person in charge of the wardrobe did an excellent job of keeping things simple and not extravagant for such a period.

The cast also delivered an excellent performance, especially Odunlade Adekola, who proved that he is not a one-dimensional actor who has the habit of overacting. Another cast member that stands out is Shaffy Bello, who made it hard to imagine a different person playing Iyaloja. Her facial expressions while delivering lines made the scene more believable.

Lastly, the concept is simply everything. And by everything, we mean creatively insightful and an escape to a different world. The idea to translate a true historical story about an integral Yoruba culture on screen is pure genius.

Honestly, dashed hopes are the feelings one might experience watching ‘Elesin Oba’ because it doesn’t give you the typical supernatural thriller vibes you expect from a Yoruba historical drama.

The tendency for this film to appeal to everyone is relatively low because it comes off more like an art piece, heavily founded in its theme and elements.

The ‘Elesin Oba’ reflected Yoruba culture, but they were repetitive.

At some point, the characters’ constant reminders of Elesin’s role and duty get tiring. And don’t get us started on the lamentations where he kept talking about being a disgrace but in a different format.

All the film’s actors are one-dimensional, highlighting the movie’s character development flaw.

The producers could have done more with the characters, especially Olunde, Elesin’s son. He could have started as a traditional pessimist and grown into an optimist at the movie’s end.

Elesin’s wife, played by Omawunmi Dada, could have brought more into the plot and also have different layers than being the complying virgin who happily marries a man soon to die.

I am not the only one who feels like the stakes in this movie weren’t high enough. Yes, the revenge of a dead king seems like a high stake, but there was a 50 per cent chance that it wouldn’t happen. Frankly, I wished maybe the people had taken Elesin’s son hostage and asked that Elesin release himself to perform the ritual.

8/10. Biyi Bandele was a phenomenal director and writer whose work will continue to inspire future generations. Elesin Oba might have shortcomings, but that doesn’t shy away from its exploration of colonialism, cultural clashes, and duty-above-desire themes.

Elesin Oba is showing in Nigerian cinemas and will be on Netflix on 4 November.