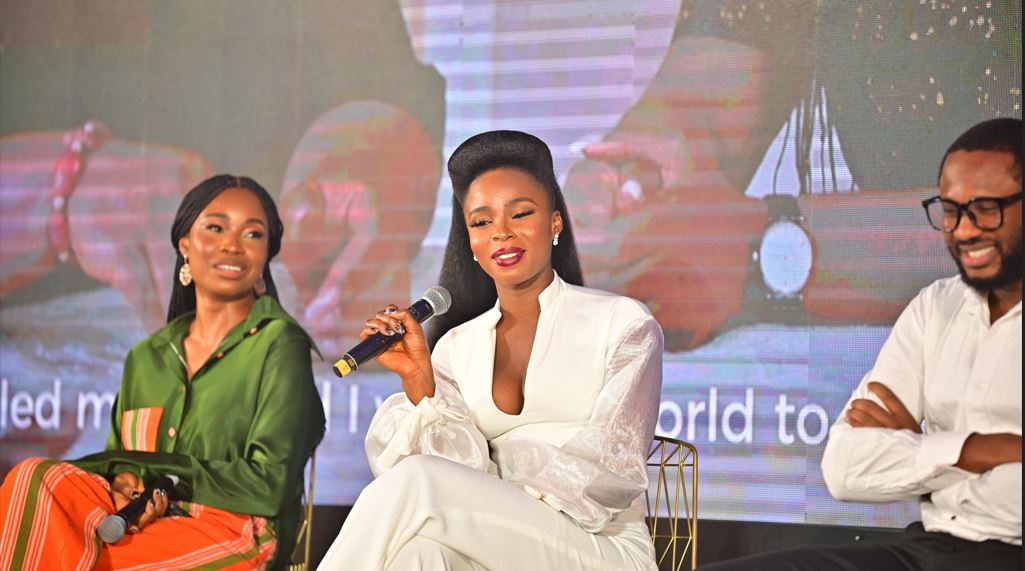 The drama follows the life of Diiche, who becomes a prime suspect in a high-profile murder investigation over the death of Nnamdi, her fiancé.

Ahead of its Thursday premiere, Showmax staged an exclusive screening in Victoria Island, Lagos, hosted by popular media personality, Chigul.

Also, the show’s executive producer, James Omokwe, and co-directors, Fiyin Gambo and Ifeoma Chukwuogo, were present and answered a few questions during the questions and answers session.

It is executive produced and directed by James Omokwe. The series is also co-directed by Tolu Ajayi, Fiyin Gambo, and Ifeoma Chukwuogo.

The drama follows the life of Diiche, who becomes a prime suspect in a high-profile murder investigation over the death of Nnamdi, her fiancé.

As the search for Nnamdi’s killer kicks off, she must prove her innocence – except a story from almost 30 years ago, known only to her mother, reveals the tussle between good and evil.

The producers describe Diiche as a psychological thriller promoting indigenous language and alluding to the ancient African culture of divinity.

Diiche was coined from the word “Odiiche”, which means “Different” in the Igbo language.

Busola Tejumola, Executive Head of Content and West Africa Channels, MultiChoice, acknowledged the cast and crew of Diiche, saying it was an exciting journey producing the series.

The Executive Director said he worked with other directors – Tolu Ajayi, Fiyin Gambo, and Ifeoma Chukwuogo noted that the choice of multiple directors cutting across different ethnic groups was deliberate.

He said this affected a situation whereby different creatives with different imaginations and ideas relay a complicated story.

After screening the first episode, the executive producer talked about how excited he was to produce the series.

‘‘I don’t want to give too much away, but there’s a particular episode in Igbo, and it’s a big deal. When the opportunity to make this film came, it was exciting for us as a team. To be honest, my real love is telling psychological stories.

‘‘The first film I ever did, called the Awakening, is a thriller. It (Diiche) was like a homecoming for me, and I was very excited to produce it. However, I was anxious because it was for Showmax, and the production scale was so large, but we did it eventually,’’ he said.

When asked what she expects the audience’s reaction to be, a cast member, Ifeoma Chukwuogo, said, “I think the audience will find the show very layered. Diiche is a beautiful blend of genres. It’s a whodunnit. It’s a psychological thriller. There are some metaphysical, supernatural stuff, and cultural elements.

‘‘So, as people watch the series, they’ll start to see so many layers to the storytelling. It’s entertaining, exciting, and illuminating. People will also ask questions about themselves, certain elements of the human condition, and some cultural things. In general, I’ll say entertaining and intriguing.”

Co-director Fiyin Gambo added to this, sharing what he believes people will be surprised to learn about the making of Diiche. He said, “I think what comes to mind is – ‘now you see me, now you don’t. With the series, you think you are right and know who killed Nnamdi, but with each episode, your thinking starts changing. I think that’s what the series does to keep that suspense throughout the six episodes. It’s almost telling you, ‘don’t judge a book by the cover and don’t take things as it is.”

Actress Gloria Anozie-Young, who played Nnamdi’s mother, said this was the first time she would be featured in a production where she had to speak the Igbo language.

She said she found it intriguing and exciting.

Another cast, Uzoamaka Aniunoh, described the series as entertaining, intriguing, exciting and illuminating, with a beautiful blend of drama and cultural elements.

Diiche premiered exclusively on Showmax with new episodes every Thursday.