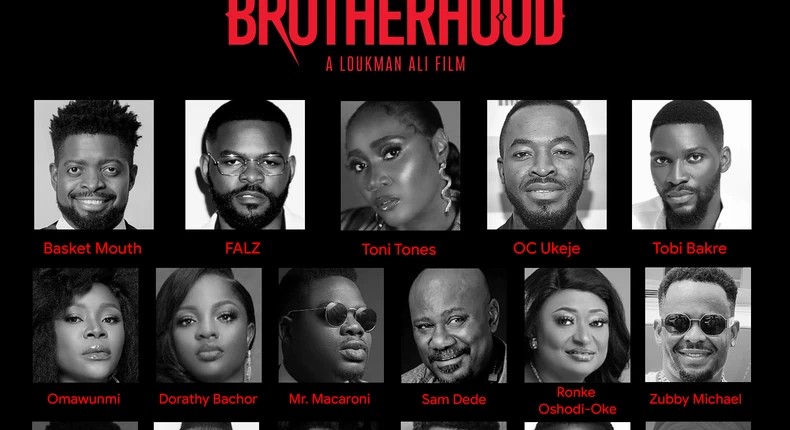 Tobi Bakare made me take him seriously as an actor, while Falz proved he could do much more than play characters with funny accents.

Before we start this review, I want to use this medium to ask the producers of Brotherhood for a sequel because there are many questions I need answers to.

When I scrolled through Twitter and saw many people raving about the ‘Brotherhood’ movie, I thought it was probably one of those overhyped, boring films. With this hunch, I went to the cinema, where I was proved wrong.

‘Brotherhood’ comes from the creative mind of Jade Osiberu, who is responsible for many blockbusters such as ‘Ayinla’, ‘Isoken’, and ‘Sugar Rush’. While the film has several flaws, it was a breath of fresh air from the cliches and tropes in Nollywood.

Directed by Ugandan filmmaker Loukman Ali, the film is similar to the 2004 Nollywood classic drama thriller, Dangerous Twins, starring Ramsey Nouah. It tells the story of twin brothers, Wale and Akin, who find themselves on different sides of the law and morality.

The Tea (The Plot)

As mentioned earlier, ‘Brotherhood’ primarily focuses on twin brothers Akin (Tobi Bakare) and Wale (Falz), who lost their parents growing up. While Wale went on to seek a job as a detective, Akin became a criminal, which landed him in prison several times.

After serving a term in jail, Akin is released and informed that his twin brother has reached a new job with the anti-crime unit, SWAT. Based on his reaction and conversation with his aunty (Ronke Oshodi), one can quickly tell that both brothers don’t get along.

Ignoring the chance and advice to turn a new leaf, Akin joins an armed robbery gang called the Ojuju Boys. Due to his intelligence and network, Akin helps step up their robbery game and falls in love with a team member, Goldie (Toni Tones).

Things were going well for both brothers until Akin showed up uninvited at Wale’s wedding party, flaunting his newly found wealth. It makes Wale suspicious of Akin being part of the notorious robbery squad.

Fast forward to the group’s final heist, and both brothers find themselves in a standoff where only one of them legally survives.

Cinematography is applaudable as camera movements and lighting complement the intentions of each scene. My favourite scene concerning cinematography would be the SWAT office because the rays of sunlight emitted through the windows gave a sense of realism to the film.

The location contributes to a film’s success, and it’s pretty safe to conclude that the director nailed it. The locations from the third mainland bridge to the Ojuju boy’s hideout made many action sequences believable and a joy to watch.

It would be somewhat of a crime if I don’t give credit to the cast, as they all delivered outstanding performances. OC Ukeje did an excellent job switching from being a Nollywood heartthrob to a greedy bad boy called Izzie. Tobi Bakare made me take him seriously as an actor, and Falz showed that he is beyond playing characters with funny accents.

Lastly, something about the storyline feels different. Maybe it deviates from the cliche narrative of twin brothers on opposite sides of the law but doesn’t know each other until the end. Brotherhood also puts a new spin on how protagonists are seen. For example, somewhere in between the movie, I found myself rooting for Akin even though he killed his brother’s father-in-law and was, in a way, responsible for the crimes.

The point is Brotherhood chooses to throw away the Nollywood cliche book and give us not only a thrilling cold open but also a bittersweet ending.

Brotherhood reminded me of the need for Nollywood to invest in a scriptwriter who, in addition to the ability to tell stories, also knows how to write dialogue. Many conversations felt flat, and there were many “show, don’t tell” moments. The latter is that characters often rely on words to move the plot forward. An example would be Wale’s first day at work, where he immediately meets a detective who clearly states he doesn’t like him. A part of me wanted something different, like maybe having this detective shoot glaring eyes at Wale before speaking to him.

Visual effects are another problem I have with this movie. While I sincerely appreciate the effort of the SFX (Special Effects) team, I have to point out that showing blood splashes on screen doesn’t make it more realistic that a person has been shot. Sometimes less is more. Also, not to sound like I know it all, but I am pretty sure they leave a mark when bullets are fired at a car.

There were some questionable casting choices, as I felt some of the actors in the movie did not bring life to their characters and were there for promotions.

Wrapping it up is the question of who killed Akin and Wale’s parents. While I appreciate that the film’s plot wasn’t built around this event, it only feels right that it plays a role. During the film, it was rarely mentioned, and there weren’t any teasers to keep audiences intrigued.

‘Brotherhood’ is a good film that would leave you on the edge of your seat, make you laugh and cry, and ask, “God, when?” while watching Akin and Wale fall in love.