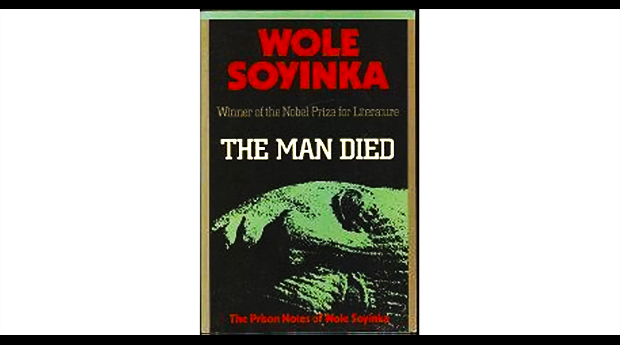 ‘The Man Died’, a memoir of Nobel Laureate Wole Soyinka’s prison experience, was published in 1972.

‘The Man Died’, a memoir of Nobel Laureate Wole Soyinka’s prison experience initially published in 1972, is set to be adapted for the big screen.

The book chronicles the account of his arrest and 22-month imprisonment during the Nigerian Civil War.

It was revealed on the same weekend that ‘Elesin Oba’, a screen adaptation of Soyinka’s ‘Death and the King’s Horseman’, was screened at the Toronto International Film Festival (TIFF).

Renowned playwright Awam Amkpa, in an interview BookArtVille on Monday, said that he had received Soyinka’s nod to produce the film.

Mr Amkpa is a Drama, Social and Cultural Analysis professor and Dean of Arts and Humanities at the New York University (NYU) in Abu Dhabi.

The 63-year-old said he works on the project with the Nigerian filmmaker Femi Odugbemi and the culture communicator Jahman Anikulapo.

On the new project, Mr Amkpa said it is at the preliminary, pre-production/ script workshop stage.

He added that although there is no clear funding source, he is consulting his extensive contacts list, but the New York University, where he lectures, allowed some $400,000 seed money for the project.

“The film will be a fictionalised account of a nonfiction material”, he said.

He explained that he has been in meetings with Mr Soyinka and other people across the country on the project.

“We are consulting several biographies of the era. A good back story leads to an original film,” Mr Amkpa added.

During the Nigerian Civil War, which took place from 1967–1970, Mr Soyinka was accused of assisting the Biafran secessionists.

In that period, he was arrested and incarcerated for 24 months, most of it spent in solitary confinement in a 4ft by 8ft cell.

READ ALSO: In time of crisis: Civilian and soldier, By Wole Soyinka

‘The Man Died’ is a product of the Nobel Laureate’s experience during that period of confinement.

The book does not follow the conventional storytelling pattern. It is a memoir of the author’s extended conversation with himself in confinement.

Soyinka’s literary pieces have always enjoyed massive theatre adaptations in Nigeria and beyond.

The first literary piece of Mr Soyinka to be adapted for television is ‘Kongi’s Harvest.

Directed by Ossie Davis, ‘Kongi’s Harvest’ is a 1970s Nigerian drama film adapted from Soyinka’s 1965 play of the same name.

Mr Soyinka also starred in the leading role as the dictator of an African nation.

In 2015, writer Dapo Adeniyi wrote and produced a film version of Soyinka’s autobiography, ‘Ake: The Years of Childhood.

Acclaimed filmmaker Tunde Kelani also adapted ‘The Lion and the Jewel’ as ‘Sidi Ilujinlẹ’ in 2017.

‘Elesin Oba’ from the play ‘Death and The King’s Horseman’ is the latest of Soyinka’s work to be adapted to film.

The late Biyi Bandele directed it.