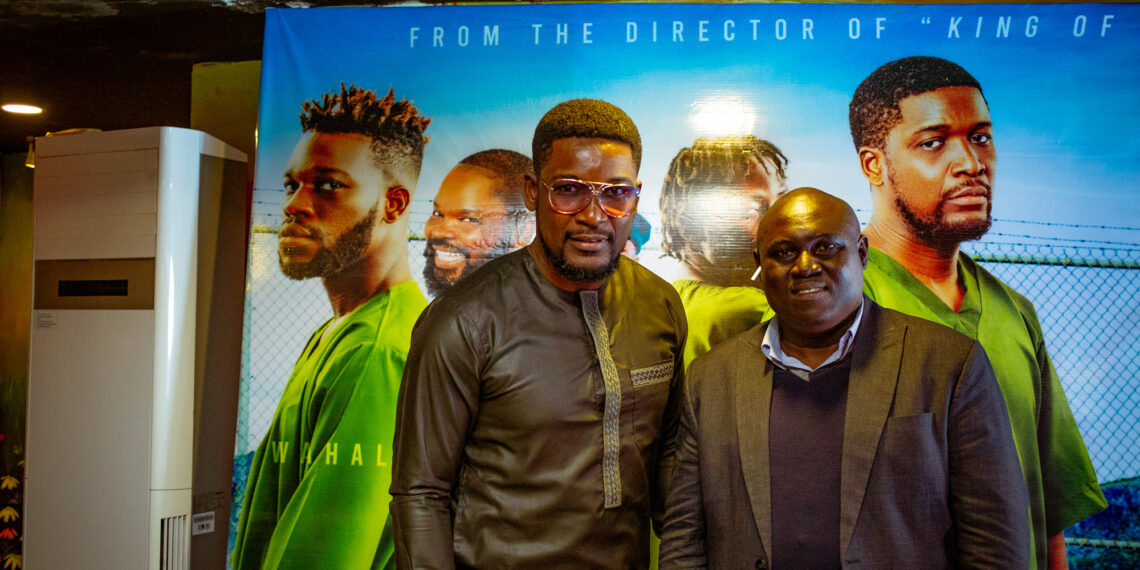 Inspired by actual events, the movie, ‘Inside Life', revolves around the faltering Nigerian Judicial system and its effect on a man's life.

It was produced by Chuks Enete and directed by Tope Adebayo Salami. The movie is the debut release of a new Nigerian film production house, Sillo studios.

Inspired by actual events, the movie revolves around the faltering Nigerian Judicial system and its effect on a man’s life.

In attendance at the premiere were actors and comic stars; Wole Ojo and Nedu Wazobia, and others. Also, the victim of the unfair Judicial system Lanre Olorunnisola, whose story inspired the film, was present at the event.

The movie, Inside Life, tells the story of an innocent Nigerian man who, unfortunately, falls prey to an unstable judicial system in the country.

It follows the story of Larry, a young man, who gets arrested and wrongfully remanded in prison a few days before his wedding.

He must figure out a way to survive the harsh realities of living with inmates while plotting a means to get released in time to get married.

In an Interview with PREMIUM TIMES, the movie Producer, Chuks Enete, explained that the cast was inspired by the presence of comedy in critical situations.

He said, “Immediately, we decided we are going to produce this movie. About 70 per cent of the movie happened in a prison cell. As I was reading, I remembered a Yoruba Adage that translates “unpleasant situations come with comedy times”.

“This was what I had in my mind when I said I needed to have comedians who would carry these roles, though seriously, you will not cry so much when you watch.

“They would bring a comedic aspect to it, which influenced our choice. But apart from that, every role painstakingly chose those we wanted to play for strategic reasons, and when you watch, you would understand why we chose this person or that person”.

Mr Enete disclosed that ‘Inside Life’ is his first credited solo production.

‘‘It might interest you that I coordinated a show (where I started from) called Domino on AIT. This is early-2000/mid-2000. I also managed the first production, In-house Production of ROK TV apart from other Productions”.

Speaking on what inspired the movie, Mr Enete said a book about his friend (co-writer-Lanre Olurunnisola) is what gave birth to the film.

He said, “I tell people this story called me, because I have taken a break from production and then a friend of mine, he is somewhere around, he gifts me a book, that he has written, about his life.

“In that book, I see how he is unjustly incarcerated, and as I get to that point, I call him and ask, is this you? Is this what happened to you? He says yes. As I kept reading, I could identify similar events that I knew, and so I told myself, I would have to make this thing into a movie, and so I call him, and that was how this journey started”.

Mr Enete described that the movie is closer to the actual reality of what happened.

He said, “The spine of the story is what happened to him; we have added just little things to make it more appealing to the viewers. But the spine of the story – a man goes to court, he is remanded unjustly, he finds himself in prison, he is trying to survive, that is his story, as captured in his book ‘prison Notes’.

Inspired by actual events, Mr Olorunnishola, the real victim of the story and co-writer of the movie, gave this newspaper a brief account of how everything transpired.

He said, “I was working for an organisation that had a matter in court, a civil matter; I had to represent the company in court, and the company lawyer was supposed to come to meet me in court, but he didn’t show up, due to his absence, the judge agreed to remand me in prison custody as the opposing lawyer requested to pass a message to my company”.

Mr Olorunnishola also explained that after his sentence, there was no vehicle to convey him to prison, and he had to cover the bill.

He explained the situation at the prison cell was terrible as he was incarcerated in a cell with 118 people.

How my failed marriage led me to depression-Lilian Esoro