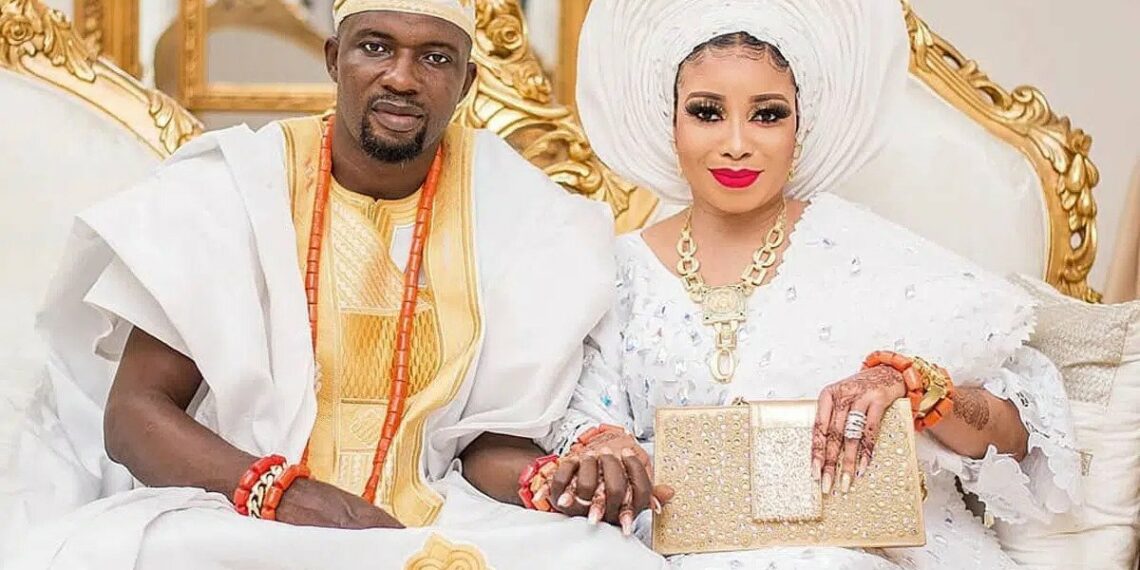 Liz Anjorin’s husband, Adegboyega Lawal, has a running battle with his estranged wife, Folashade Olalude, whom he married in 2017.

A Federal High Court sitting in Lagos on Monday received a suit filed by Adegboyega Lawal against his estranged wife, Folashade Olalude and the men of the Nigerian Police.

They had an elaborate Nikkai ceremony attended by some of her friends in the movie industry in July 2020. A few months after settling into married life, controversies arose.

His friend, Saheed Abogun, introduced him to his estranged wife in 2016. They married in 2017 after a formal customary introductory ceremony in her father’s house at lyana Iyesi, Ota, Ogun State.

He had dragged his estranged wife, Folashade, before the court in a fundamental rights enforcement suit marked FHC/L/CS/1488/22, alongside the Assistant Inspector-General of Police, Zone 2, Onikan, Lagos, its Officer-in-Charge of the Monitoring Unit, and one Mrs Tina, an Investigation Police with the Zone 2.

Mr Lawal, in the suit filed by his lawyer, M. B. Bello, asked the court for “a declaration that the continuous harassment, humiliation, spreading of falsehood, and abuse on social media against him and his family by his estranged wife, is vindictive.

They also sought “An order of injunction restraining the second and third respondents, whether by themselves, their officers, agents, servants, privies or acting through any person or persons howsoever from further harassing, humiliating, embarrassing and threatening to detain the applicant based on the false and unfounded allegations from the first respondent”.

But his estranged wife, Ms Olalude, the first respondent in the suit, in her counter affidavit filed by her lawyer, Wahab Shittu, has asked the court to dismiss Mr Lawal’s case because it seeks to truncate an ongoing police investigation against him.

She stated they were both living as husband and wife at No. 7 New Oko-Oba Road, Fagba, Lagos and that their second child was three to four months old when the applicant suddenly absconded from their marital home, abandoning her and the children without justifiable reasons in 2020.

Ms Olalude also said he has stopped meeting his marital obligations and responsibilities, including paying the house rent, children’s school fees and maintenance allowances for the children.

She stated that she got to know subsequently that Mr Lawal had started a relationship with the Nollywood Actress Lizzy Anjorin, and they both launched a vitriolic attack on her and her children on various social media platforms for the applicant to abandon his matrimonial responsibilities to her and the two children of their marriage.

She stated that the applicant, through his new wife, has issued several threats to her life on social media platforms to the extent that her life and that of her children remained threatened, and she no longer felt safe walking on the streets for fear of being attacked.

Ms Olalude added that when the threats and attacks became unbearable, her plight got the attention of human rights activists and online social bloggers, who launched a public campaign for her protection against the unjustified attacks by the applicant and his actress wife, including their collaborators.

She also stated that she officially reported the applicant and his new wife, Lizzy Anjorin, to the Police at Zone 2, Onikan, Lagos Island.

Following the official report made by her to the Police, the second, third and fourth respondents officially invited the applicant, who has repeatedly been shunning police invitations, stating his side of the story.

She stated that the suit instituted by the applicant was designed to prevent him from honouring the invitation extended to him by the other respondents, and that she never harassed, humiliated or spread any falsehood against the applicant or his new wife, Elizabeth Ibukunolu Anjorin, as alleged.

She averred that she never published or caused to be published any falsehood against Mr Lawal and his new wife on any social media platforms as alleged, other than the legal action she has taken concerning the harassment, abandonment, neglect and threats that she faced daily in the hands of the applicant, Elizabeth Ibukunolu Anjorin and their collaborators.

She also denied the applicant’s allegations of calling him a “Gigolo”, a gold digger, on Facebook and other social media platforms.

Still, she stated that she was the victim of the applicant’s neglect and abandonment, as the applicant abandoned her with two children, only to run to Elizabeth Ibukunolu Anjorin.

Ms Olalude also said the applicant had been consistently interfering with her freedom by instigating the landlord of their former rented matrimonial premises at No. 7 New Oko-Oba Road, Fagba, Lagos, to prevent her from moving out her personal belongings from the said house to date.

She said that her previous attempts to move out her personal belongings from the said premises were resisted by the said landlord.

“He has been using the children of his first marriage to persistently harass her on social media through all kinds of unprintable insults hauled at her person.

“The suit filed by Adegboyega aimed to truncate the police investigation of allegations against him.”