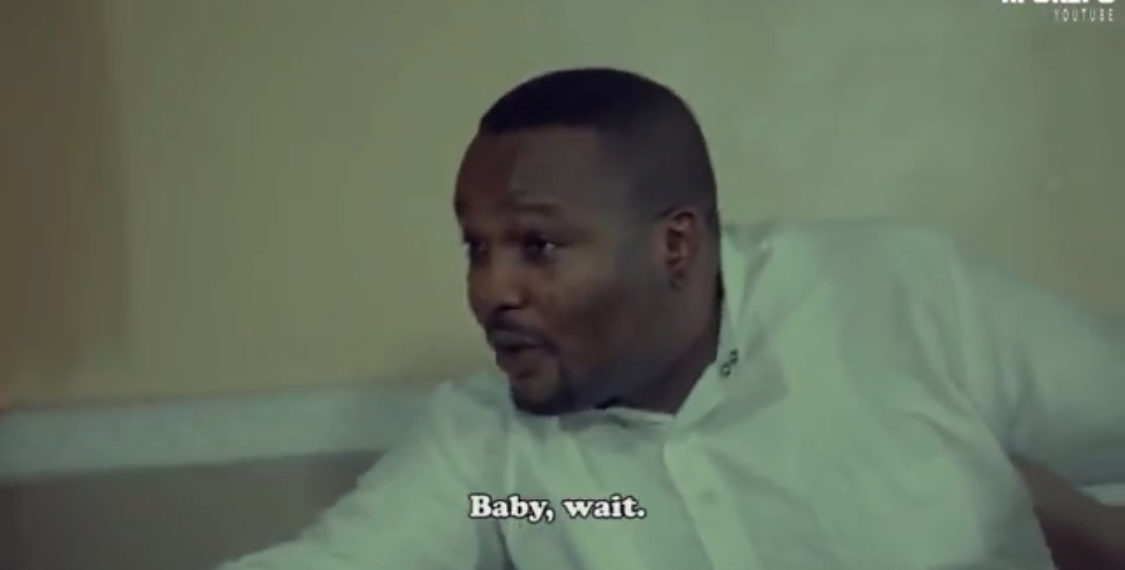 Yomi Fabiyi in a scene from his controversial movie, ‘Oko Iyabo’ released on YouTube on Sunday.

One of the scenes in the movie is a reenactment of the viral CCTV footage which allegedly implicated Baba Ijesha in the rape mess.

A Yoruba actor, Yomi Fabiyi, has made good his promise to release a movie based on the rape allegation levelled against his embattled colleague and close friend, Omiyinka Olanrewaju (Baba Ijesha).

The movie, ‘Oko Iyabo’, which is loosely based on Baba Ijesha’s alleged rape saga, his ‘social media trial’ and all the parties involved, debuted on Sunday.

The actor had earlier disclosed that he was going to release a film which would give an insight into the circumstances surrounding Omiyinka Olanrewaju’s (Baba Ijesha) alleged rape mess.

But his critics and fans of his colleague, Iyabo Ojo, have accused him of portraying Baba Ijesha as a victim who was falsely accused of dating a 14 year-old girl in the film.

When PREMIUM TIMES watched the movie on Monday evening, it was observed that one of the scenes was an exact reenactment of the viral CCTV video footage which implicated Baba Ijesha.

Recall that the commedianne, Princess, who accused Baba Ijesha of raping her 14-year-old foster daughter, released a CCTV footage showing the moment Baba Ijesha was allegedly caught sexually harrasing the teenager & also confessing to the crime.
This was in April.

In Fabiyi’s movie, a teen actress could be seen making the first move on the actor. It also portrayed Baba Ijesha as a victim of a carefully orchestrated ploy by his close friend.

Justifying his reason for the film on Monday night, Fabiyi said, ‘‘The storyline is good and meant to inject right values, correct ills and educate but social media will always go this route.”

“Thanks for reaching out and expressing yourself on the movie.”

He also said he had asked that the film be taken down following public outcry that has heralded its release.

The umbrella body of the Yoruba film industry association, TAMPAN has summoned Fabiyi to appear before its association’s Committee on Ethics, Conflict and Resolution.

TAMPAN shared a copy of the summon letter signed by its Director of Research and Documentation, Yemi Amodu on Instagram.

In the letter, the association categorically stated that the movie was against its ethics and virtue.

It partly read: “The TAMPAN Committee on Ethics, Conflict and Resolution wishes to inform the general public that the association has summoned Mr. Yomi Fabiyi who is the Producer/Director of the controversial film titled “OKO IYABO” is to appear before it on Thursday 11th July 2021.

“This invitation becomes very necessary because of the controversy that the subject matter of his film has generated which is against our ethics and virtue.”

“Despite that, we realize that the film has sparked another round of dissension between TAMPAN and the public; this is unacceptable to us and unsuitable to what we represent.”

“We hereby implore the general public and the parties concerned to please exercise patience as our eminent association is on top of this issue and will certainly ensure fairness and justice.”

Mr Fabiyi has been a strong advocate for Baba Ijesha who was has been embroiled in a rape scandal since April.

On May 14, he single-handedly led a peaceful protest in Lagos over Baba Ijesha’s continued detention.

He told this newspaper then that although his views are largely unpopular, the protest was aimed at kicking against all forms of human rights violations.