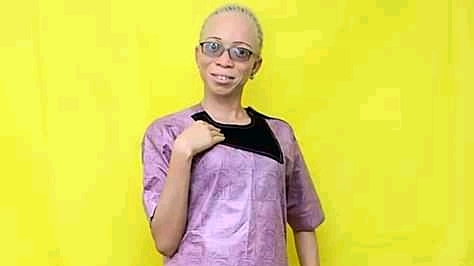 Nollywood starlet, Rebecca Akinsulire, has been starring in notable Nigerian movies since 2013 with the hope of becoming a household name.

Nollywood starlet, Rebecca Akinsulire, has been starring in notable Nigerian movies since 2013 with the hope of becoming a household name. But, the actress, who is an albino, says breaking into Nollywood’s big-league is tougher than she imagined.

PREMIUM TIMES interviewed the talented actress at a recent event organised to commemorate The International Albinism Awareness Day observed annually on June 13. She spoke about her career and why it is difficult to break into Nollywood’s big league as an albino.

PT: How did you start the journey into acting?

Rebecca: I went to PEFTI Film Institute which is owned by Wale Adenuga. My godfather sponsored me through that. From there, I started my career in 2013. The journey has not been easy because of my skin colour and everything. It is not easy for me and it’s just God.

PT: Why did you decide to go into acting?

Rebecca: From my childhood, I have been into drama even in the church. My dad wanted me to be a lawyer, but I said no. I love acting. I had to beg my godfather to talk to my dad. I didn’t want to study Law; so I opted for acting and here we are today.

PT: What was your first time on a movie set like?

Rebecca: Well, my first time on a movie set, the movie was titled “Silent”. I played the role of a wedding guest. It was not easy being in front of a camera.

PT: Did you encounter any discrimination while on set?

Rebecca: On the set of ‘Silent’ movie, some other actresses were asking if I would be able to see the camera. They asked the director if I could see clearly and if I could interpret the role? With God on my side, I was able to pull through. But, I really felt bad. Another challenge was the make-up artist. She said in Yoruba “Will this one be able to use make-up? What make-up will I do for this one?” There are so many challenges but I am used to these challenges.

PT: Did they eventually apply the make-up?

Rebecca: Then I was pissed so I just told the makeup artist to go away and that I don’t need any make-up again. She didn’t know that I understood Yoruba, so I just asked her to go away. My boss was like, ‘‘Rebecca what happened’’ and I said nothing, I’m fine.

PT: How did you get the role?

Rebecca: After I finished my course at PEFTI, I joined Iyabo Ojo’s drama group. I attended weekly rehearsals and there we were told what to do given information about movie locations, costumes, props, and sets.

PT: What are some of your memorable movie roles?

Rebecca: It depends, but for now, I have three big movies like ‘Silent’, ‘Somolu babes’, and ‘Shoprite.’

PT: How come you haven’t featured in several other movies?

Rebecca: Well, another thing is my school. So right now I’m juggling school and my acting career. I currently attend Lagos State Polytechnic where I am studying Mass Communication. It has not been easy for me, for now.

PT: Who are your role models in the film industry?

PT: What advice can you give to other persons with albinism who intend to go into the Nigerian film industry?

Rebecca: Be patient, be jovial. If you are jovial, you will conquer everything.

ANALYSIS: Why AFN election may lead to a fresh round of crisis