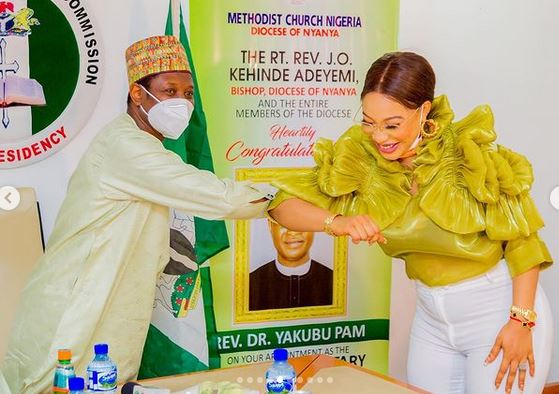 NCPC has denied appointing Tonto Dikeh as its Ambassador of Peace

Tonto Dikeh broke the news of her controversial appointment on Instagram on Thursday.

The movie star broke the news of her appointment in an Instagram post on Friday and shared a picture of herself alongside Yakubu Pam, the executive secretary of the NCPC, during her visit to his office in Abuja on Thursday.

“We had an extensive deliberation on NCPC vision, dissecting the values for National development and youth involvement in peacebuilding in line with the NCPC’s mandate,” she wrote on Instagram.

“Finally, I wish to announce my position as the new Ambassador of the Commission for Peace Building. Need your prayers as we embark on Peacebuilding across the six geopolitical Zones of the Nation because peace is indispensable.”

Mr Pam also shared photos from Dikeh’s visit on his personal Instagram page and commended the actress ‘‘for pledging her desire to support NCPC in sponsoring intending pilgrims to the Holy land.’’

He, however, did not mention that the actress had been given an appointment.

The NCPC would later debunk her claims in a statement issued on Friday by Celestine Toruka, Head Media and Public Relations.

“As the founder of Tonto Dikeh Foundation, she expressed her willingness and interest in partnering with the Commission in the area of peacebuilding.

“She equally cashed in on the visit to commend the NCPC boss for his positive and relentless peace initiatives across the country.

“However, we are suddenly inundated with claims from King Tonto Dikeh herself that she has been officially appointed as Ambassador of peace by this great Commission. This claim has gone viral in the media.

“The Commission frowns at this claim which is a clear misrepresentation of what transpired.

“The fact remains that the Executive Secretary of NCPC never appointed King Tonto Dikeh an Ambassador of Peace for NCPC and this was not part of her visit, therefore this claim by her is spurious, unfounded, and should be discarded and seen by all Nigerians as a figment of her imagination

“Nevertheless, we appreciate her desire to partner with us in our peace-building initiatives and in the area of pilgrimage sponsorship to the Holy Land’’.

Reacting to the commission’s rebuttal of her supposed appointment, the actress maintained that she had evidence to back her claims. She also inferred that some people were behind the NCPC’s ‘sudden’ decision.

‘‘There are video proofs, but I would Rather respect the commission’s decision and take the Fall. Thanks to every Christian body that fought against this growth.’’

Dikeh, who was appointed as the director of socials and empowerment by the pro-government Committee of Youth on Mobilization and Sensitization (CYMS), in 2020, has had her own share of bad press in recent times.

She trended last week after her ex-husband, Olakunle Churchill, announced his marriage to her colleague, Rosy Meurer.

Meurer was at the centre of Churchill’s divorce brouhaha with Tonto. Churchill was accused of having an extramarital affair with Meurer, his then P.A. in 2017.

In 2017, Tonto told Media Room Hub she was aware that Meurer is the reason Churchill abandoned her and his son, that she has been sleeping with her husband.

She also revealed that her husband bought Meurer a car as a birthday gift.