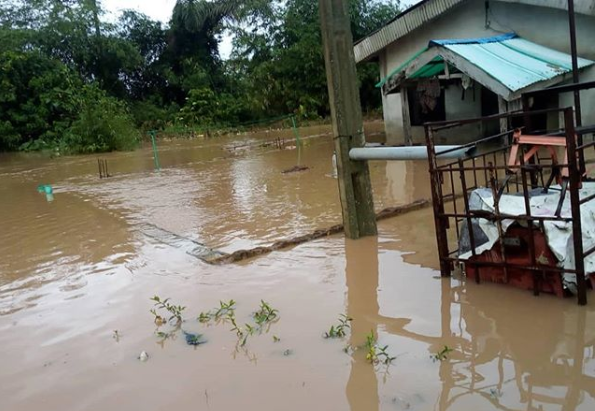 His younger colleague, Kunle Afod, posted a picture of Pa James’ house on Instagram along with the message, “Let’s come together to support Pa James. This is his house overtaken by flood. God will help you as you lend your helping hand”.

Let's come together to support Pa James … This is his house Taking over by flood… Pls and pls God will help u as u lend your helping hand… OLASEHINDE JAMES OLUKAYODE, 0113635178 GTB

The film star’s residence which is located in Oke Isagun community from photos shared on social media can be likened to a small river.

This is not the first time the veteran actor’s home will be overtaken by the flood.

Around this time last year, Pa James, 63, posted a video of himself scooping water from his house after it was flooded.

He described the experience as something “I can never forget in my life.”

At the time, he said his family always pleaded with the government, but “they have just been deceiving us.”

Some of his colleagues like Foluke Daramola and Kemmy Korede have taken to social media to raise awareness and seek help for one of their own.

The news was shared on Instagram by actress, Kemi Korede, who asked fans to thank Funke for her lovely gesture.

Her post read “On behalf of PA JAMES, I Want to say Big thank you to @funkejenifaakindele for the new apartment given to him by you.

“God bless you so much for your good heart. your type is so rare..you are a gem. Almighty God will continue to make way for you where dier seems to be no way.”

Pa James who is popularly called Ajirebi started acting in 1976. His master then was the late Olanrewaju Ali, who had a theatre group in Lagos.

He was an employee of UTC Hardware, Apapa as a labourer when he began his acting career.

But at a point, Olanrewaju decided to veer into fuji music because Sikiru Ayinde Barrister and others were making money in music.

So, he joined Emulewu Theatre Group in 1982 and was named Ajirebi. He produced his first movie, ‘Enu Ope’ in 2001.

He became more famous after Wale Adenuga gave him the role of Pa James in popular drama series ‘PaPa Ajasco’.