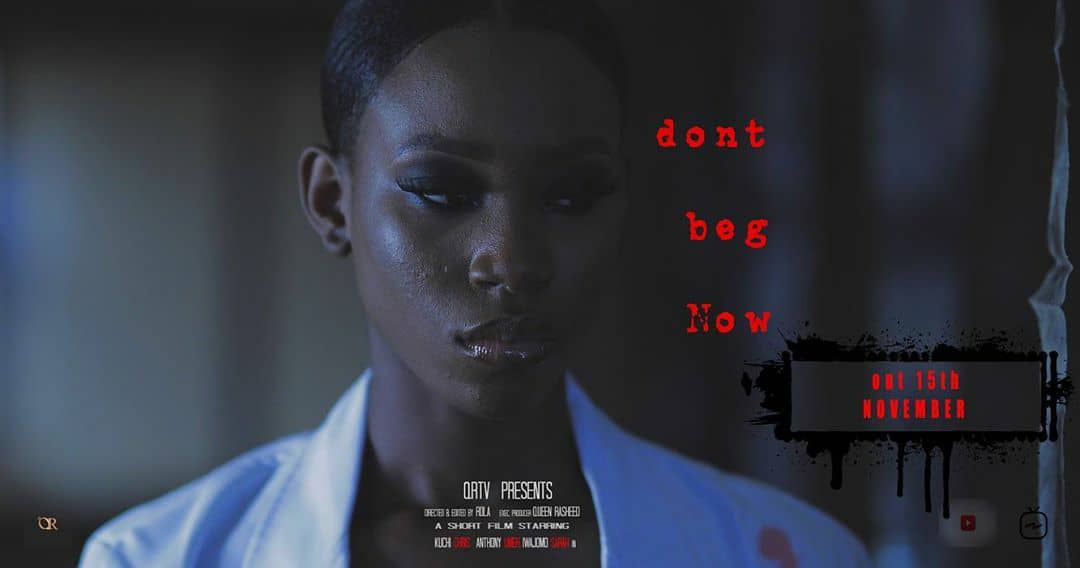 For Queen Rasheed, a 24-year-old media entrepreneur, film is the most powerful tool when it comes to fighting social causes.

This was what motivated her collaboration with a popular filmmaker, Rola Olawore, to produce a short advocacy film ‘Don’t Beg Now’.

The film portrays the plight of rape victims in Nigeria. It also seeks to end the culture of silence with regard to rape.

Ms Rasheed, who owns QRTV, presented the film to the media at 355, Restaurant and Lounge in Victoria Island, Lagos, on Monday.

The short movie, which stars relatively new actors, Kuchi Chris, Anthony Umeh, and Sandra Iwajomo, showcases the psychological struggles and the years of regret that rape victims are subjected to in a lawless society.

She explained that the film graphically showcases the psychological struggles that rape victims in Nigeria are being subjected to.

Although the film’s plot is characteristic of what is obtainable in Nigeria, she said the theme of rape is universal and as such, relevant in any part of the world.

Even though the self-funded movie (Don’t Beg Now) was shot months before the infamous COZA rape scandal broke out, Ms Rasheed debunked reports that it inspired the plot of her movie.

She said the coincidence is a pointer to the fact that the subject of rape will forever be a topical issue.

She noted that since the biggest sex scandal broke out this year, more Nigerian women have come forward to share their personal stories of sexual assault, rape, and violence against women.

I’m happy that Nigerians and even policy leaders have begun to notice of the menace of rape in our society” said Rasheed.

But, according to her, more still needs to be done. Hence the need to shoot the advocacy film.

“We shot this film to portray the plight of rape victims in Nigeria and also enable the society to understand that rape is not what the victims can just get over, what with the stigma attached to it. We want people to know that rape can drastically change or outrightly destroy an individual’s life and people need to understand the gravity of what rape is.”

“People who have no idea about what rape trauma feels or even looks like, they will get a sense of how a dark topic like rape can be addressed. In the short movie, we hope to achieve that whilst even shedding light on the dangers of rape and the lingering effect it has on the victims”.

A visibly passionate Ms Rasheed also lamented that the plight of rape victims are inadequately represented in Nigerian movies.

She noted, “I had to come up with a project that would tell a deep story and enlighten the Nigerian and global audience at the same time. We are not trying to monetise the release of the movie as the movie is free to watch on Vimeo. This is why we want the Nigerian media to work with us on this social advocacy project because together we can win the war.”

Explaining the production process, the director revealed that the team embarked on several months of research and planning, in order to get the plot and artistic direction right.

“We interviewed a lot of rape survivors to gain insight about their plight and to determine the artistic direction of the movie. The film is intense and carefully thought out. We focused on the trauma and what happens in the aftermath of a rape incident,” he stated.

“You really need to see the film to appreciate the amount of effort that has gone into it.”

‘Don’t Beg Now’ is available to watch for free on Vimeo.