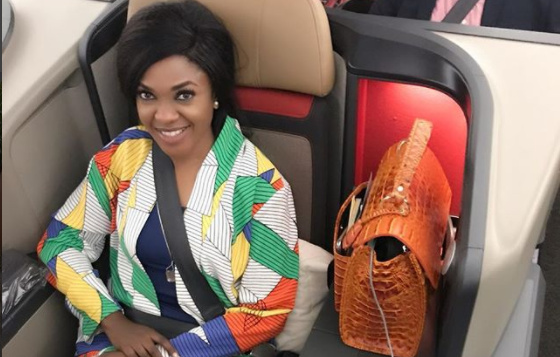 Nollywood actress and producer Omoni Oboli unveiled a new book, ‘The Stars Are Ageless’ to mark her 40th birthday.

Oboli, is one of the 27 participants selected from among 300 nominees from over 30 African countries for the 2018 Archbishop Desmond Tutu Leadership Fellowship.

She made the announcement on her Instagram handle @omonioboli.

She wrote, “It’s my birthday niccur! I deserve some accolades!!! I paid my dues!!! I work so hard! I wrote a book! #TheStarsAreAgeless.

“You can now add author to my name. Been working on this baby for a while and she’s finally here! Thank you Lord! 40 sure look good on me!

“Thanks to my publishers @narrativelscape we burnt the midnight candle on this one! Thanks to everyone that worked tirelessly to make this happen! Love you all.

“Copies available for sale from tomorrow, I can’t keep still,” she added as she unveiled the cover to her fans on her page.

Oboli began her formal movie career in 1996 with her first movie role in ‘Bitter Encounter’, where she played a secretary. Her next movie was ‘Shame’.

She then went on to play the lead female character in three major movies; ‘Not My Will’, ‘Destined To Die’ and ‘Another Campus Tale’.

After enjoying a brief career in 1996, Oboli left the movie industry to complete her university education. She married immediately after school and did not return to the industry until a decade later.

Oboli, who is a mother of three boys, is also a scriptwriter and director trained at the New York Film Academy.

She has a lot of screenplay credits to her name, including ‘Fatal Imagination’, ‘Being Mrs Elliott’, ‘The First Lady’, and ‘Wives on Strike’.