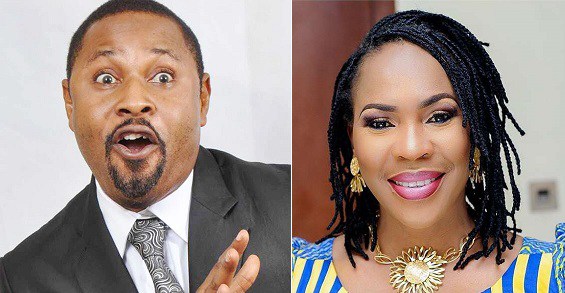 The reconciliation fever has caught the movie industry as estranged couple, Fathia Williams and Saidi Balogun, have danced together in public for the first time since their divorce four years ago.

The surprise dance between the Yoruba movie stars was one of the highpoints of Mercy Aigbe’s 40th birthday party which held on Monday, and it earned them a loud applause.

Saidi took it a notch higher when he proceeded to spray his ex-wife with cash nonstop as she danced to a music performance by Yoruba music artiste, Boyebest.

Erstwhile sworn enemies, the couple who interestingly are birthday mates, have been known to shun each other at events. Insiders also say they are known to reject roles that require them starring alongside each other.

However, Saidi’s first wife, Sherifat Balogun, a singer, was in attendance in company with her kids, Zinnat and Jamal.

In November, Fathia reverted to her maiden name “Williams” four years after their divorce was finalised in 2014.

Fathia and Saidi wedded on September 2000 at the Ikorodu Marriage Registry in Lagos. The union produced two children. Fathia who was previously married had bore a child.