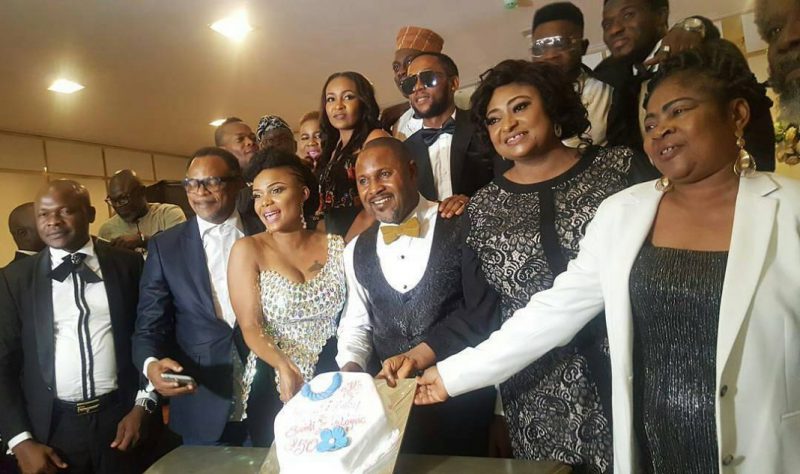 It was a gathering of prominent persons in Nigerian entertainment when actor, Saidi Balogun, celebrated his golden age at a birthday dinner on Thursday night.

The event was held at The Executive Spot and Hotel, Ikoyi, Lagos. Tagged an “Evening with Saidi Balogun,’’ corporate bodies and the likes of Fred Amata, Omotola Jalade-Ekeinde, Desmond Elliot, the German Consular-General, Gloria Young, Kalu Ikeagwu, and Sunkanmi Omobolanle were present at the classy shindig.

Conspicuously absent at the event was his 48-year-old ex-wife and actress, Fathia Balogun, who interestingly is Saheed’s birthday mate.

The dinner with stars was organised to fete captains of industry, who are also involved in the entertainment industry and who would help ensure development of the sector.

Speaking with PREMIUM TIMES at the fete, Saheed said, “I feel successful even after being in the industry for a fulfilling 35 years and more. For me, 50 marks the end of my first half and the beginning of the second half. I ended the first in a big way, so I am starting the next in a bigger way.

“I have had my flaws and I am not ashamed to speak about them. I have had the worst moments in life; I had a terrible auto accident some years back, one that almost claimed my life. In fact, a lot of people had concluded that Saheed Balogun could not survive it, but here I am today. I have so many reasons to celebrate my life and God’s goodness.”

The four-day birthday celebration kicked off on Tuesday, July 4, when the veteran actor visited the University Teaching Hospital, Ibadan. The actor who was appointed an ambassador of the institution said it was a rare feat considering the fact that he was the first to attain that position.

Saidi said, “It was a privilege yesterday at the University College Hospital (UCH), Ibadan as I was honoured by the number one medical institution in Nigeria as its first ambassador in the 60 years of its establishment. I am happy to announce that my new role will see me represent the institution in all national and international engagements. This is a huge responsibility, one which I am glad to be associated with.”

As part of the birthday celebrations, the actor visited the Boys Remand Home, Oregun on Thursday for a pep talk.

Mr. Balogun clocked 50 in February and celebrated in Saudi Arabia.

He had originally planned a four-day celebration, which would span from May 22 till May 25. He, however, postponed the celebrations till July 4 in honour of three Yoruba actors, Olumide Bakare, Prince Adesina Adesanya and Moji Olaiya who passed on.

The grand finale of the birthday celebration comes up on July 7 in Lagos at Grand Dior Event Centre, Oregun, Lagos.