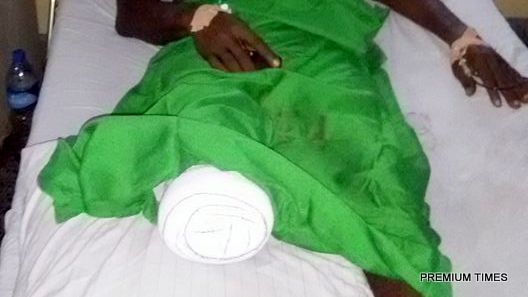 Veteran Nollywood actor, Tunde Alabi, who has been laying critically ill, over complications from diabetes, has finally had one of his legs amputated.

The amputation was carried out on Monday at the Lagos General Hospital.

According to fellow actor, Paul Julius, who has been at the forefront of Mr. Alabi’s fundraising, the surgery had to be carried out to avoid further health complications.

It read, “So sad! Our Veteran Actor’s foot finally amputated. I have laboured through thick and thin to save the life of Uncle Tunde assisted vigorously by the indefatigable Chairman of Actors Guild of Nigeria, Lagos State Chapter, Mr. Don Pedro Aganbi and through the contributions of a few spirited colleagues and fans.

“We were only able to manage to keep him alive but not with his full body. Now he is faced with another battle for survival. Expensive drugs are required to heal the amputated leg.”

Speaking further, Julius also revealed that he has been the only person caring for the actor.

“As I speak with you, the amputated leg has just been taken to the mortuary. But that is not our major concern right now but where he will return to as his home. Right now, he has no family, no friend that can take him in. He is homeless. No home to return, no money to afford one as his ailment has suck up his entire finances.

“We have done our best. What would you rather do to assist him? Just put something in his account no matter how small and the Lord will reward you abundantly. Thank you.”

Alabi, one of Nigeria’s foremost actors, is best remembered for his role in the popular NTA TV drama series, Village Headmaster.