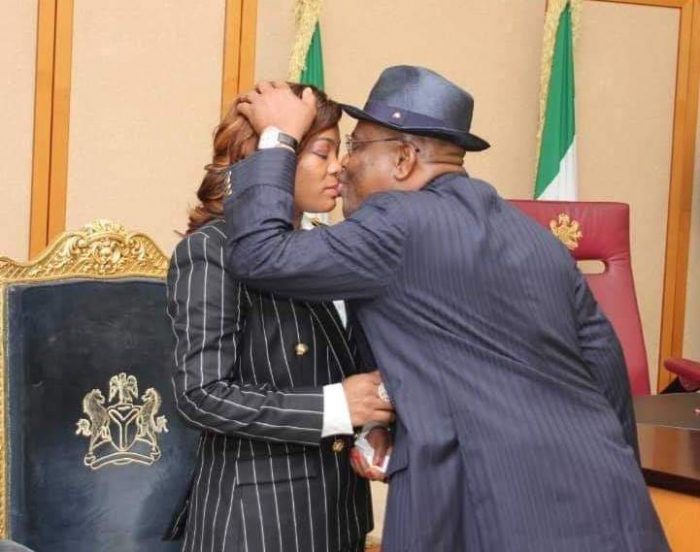 About Nyesom Wike’s romantic side

Asides from his issues with PDP's presidential candidate, Atiku Abubakar, one aspect of the Rivers State governor, Nyesome Wike, most people are not familiar with is his romantic side.

Asides from his issues with the presidential candidate of the Peoples Democratic Party, Atiku Abubakar, one aspect of the Rivers State governor, Nyesome Wike, most people are not familiar with is his romantic side.

The sixth governor of Rivers State, though known for running the state with a measure of firmness, never fails to show his romantic side when he is around his wife, Justice Eberechi.

On Saturday, Governor Wike, a lawyer, brought the political and social classes together when he hosted the 2022 Rivers State Government Honours and Awards at the Government House in Port Harcourt.

He awarded his wife the ‘Distinguished Service Star of Rivers State’ during the event.

In wrapping up the ceremony, the Governor, who has repeatedly shown a knack for showbiz, thanked his guests for coming. He then threw a jab at his wife, telling her that she had to care for him that night.

His comment drew laughter from the guests and has since trended online.

“Agreement is agreement. I thank all of you for coming, and I can tell you tonight I feel so happy. My wife must take care of me tonight o. because I cannot be talking like this; all this strength, you have to take care of me o,” he said.

Governor Wike also conferred four out of the G5 Governors of the Peoples Democratic Party and allies to their Rivers State counterpart, with the Grand Service Star of Rivers State, the highest honours in the state.

The recipients of the second category of awards, Distinguished Service Star of Rivers State, are the Attorney General of the Federation and Minister of Justice, Abubakar Malami, wife of the Rivers State Governor and the wives of Seyi Makinde and Donald Duke.

Other award categories are Public Service (Judiciary), Rivers State legal team that won the return oil wells to the state, where seven Senior Advocates of Nigeria received the award, including Mike Ozekhome and Ifedayo Adedipe.

Despite his rugged mien, Governor Wike and his wife, Eberechi, have shared many romantic moments with the public.

The ‘first citizens’ of Port Harcourt have often been pictured or recorded passionately kissing and locked in a loving embrace. 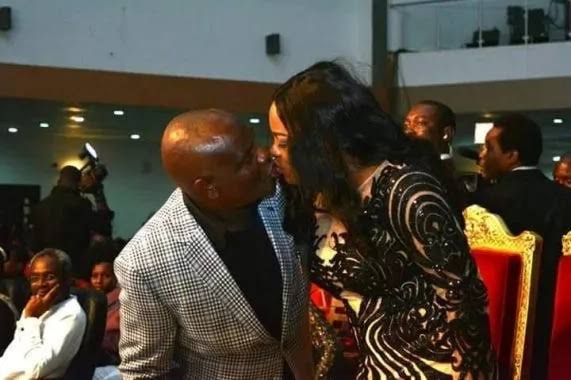 Mr Wike never fails to steal one or two long kisses from his First Lady whenever they attend a public function together.

Mrs Wike is a judge of the Rivers State High Court of Justice.

The official photographers of the Rivers State government house and residents are used to their numerous PDAs.

In January 2020, shortly after the swearing-in of judges at the Government House in Port Harcourt the couple engaged in yet another round of passionate kiss.

Dubbed Nigeria’s most romantic Governor, Wike has shown his romantic side several times with his wife.

Photographers at the event captured a romantic moment of the Governor passionately kissing his wife at the event.

The couple also stole the show when they locked lips at the 2016 Africa Movie Academy Awards held in Port Harcourt.

In August of the same year, the Governor was spotted kissing his wife at the 56th Nigerian Bar Association, BAR, Conference in Port Harcourt.

They once again kissed at the International Federation of Women Lawyers, (IFWL), dinner, which was held at the State Government House in Port Harcourt.

At the 2017 Independence Day celebration in Port Harcourt, they were photographed kissing while spectators watched.

On October 5, 2019, the Governor celebrated his victory at the election Tribunal with a long romantic kiss with his wife at the Government House, Port Harcourt.

In commemorating their 17th wedding anniversary in 2016, Mrs Wike shared their love story on Facebook.

Though they were not friendly then, the couple, who attended school together, have been married since 1999.

They have three children.