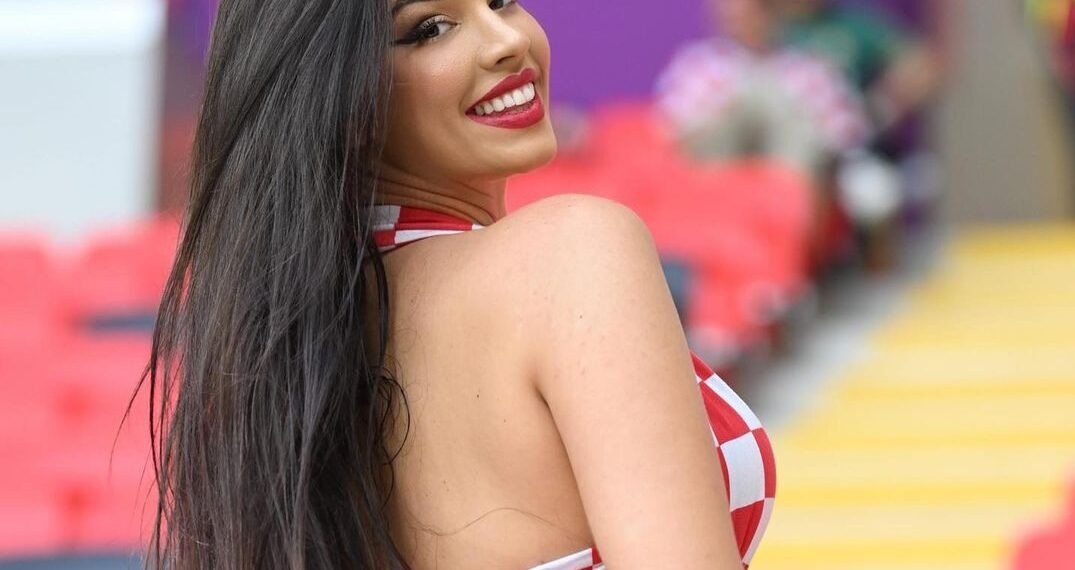 Before the World Cup, Qatari authorities warned that women in their country are not allowed to violate any of its ‘decency’ laws

It’s football season as the quadrennial competition, the World Cup, continues to heat up.

But one fan stands out: Ivana Knoll, a former Miss Croatia.

Amid all the noise, Ms Knoll, a Croatian beauty queen, is trading all that macho energy for crop tops, bum shots and a splash of cleavage.

The 30-year-old star has shown avid support laced with a patriotic zeal for the Croatian team tagged Vatreni (Blazers) or Kockasti (Checkered Ones).

But it didn’t start this year. During the 2018 World Cup hosted by Russia, Ms Knoll became an internet sensation, earning her the title of the ‘hottest World Cup fan’.

The news outlet says she “previously sauntered around Qatar in a G-string swimsuit and other eye-popping outfits that could attract trouble in the strict Islamic nation”.

Ms Knoll, who stands at the height of 5 ’11”, has been drumming support for the Croatian national team and, perhaps, boosting their morale.

On the 23rd of November, when her home team played their first match against Morocco at the Al-Bayt Stadium, the model wore a figure-hugging top bearing the country’s national colour combination of red and white.

On the 27th of November, during the second match of her home team against Canada, Ms Knoll dazzled in a strapless minidress in the Croatian national colours at Khalifa International Stadium.

She wore matching socks as well.

On Tuesday, Croatia beat Japan during the World Cup, earning the entire country a troll from Ms Knoll.

She posted a taunting video of herself nibbling on sushi, a famous Japanese dish, on Instagram with Asian music playing in the background.

Some have said that Ms Knoll’s appearances are too risque for a conservative country like Qatar.

Before the World Cup, Qatari authorities warned that women in their country are not allowed to violate any of its ‘decency’ laws

It is reported that Ms Knoll might face fines and jail time for her ‘provocative attire’ at the current FIFA World Cup in Qatar.

According to the regulations released by the Qatari government, women are not allowed to wear revealing outfits in the country.

The rule states that “women shall not show their stomach, shoulders, knees, or breast.”

The country’s laws impose heavy penalties as high as $2400 just for littering in the stadiums.

It is believed that Ms Knoll would face a more severe fine for violating so-called “decency laws”.

An unconfirmed news report says that the Qatari government may soon issue a warrant for her arrest.

However, Ms Knoll has carried on, seeming unconcerned about facing any punishment.

A minimalistic range inspired by Croatia’s affair with the Croatian national symbol, a red and white checkerboard.

Although of Croatian descent, she holds German nationality as she was born in central Europe.

She currently has a net worth of over a million US Dollars from her fashion house and social media influence.