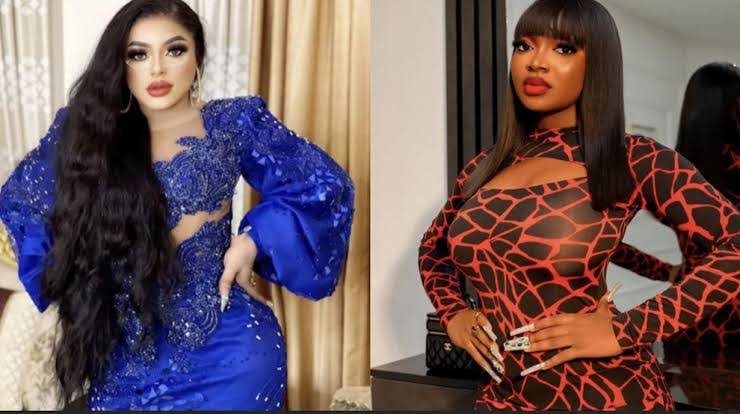 The battle of the socialites began when Papaya Ex imitated Bob with her upcoming housewarming party by rolling out invites for her grand party.

From videos circulating the internet, Bob kept to his word as he promised earlier to deal with PapayaEx whenever they meet.

In the videos, Bob was seen seated at one side of the event while Papaya Ex backed him.

The brand influencer and her gang were seen stylishly throwing shades at Bobrisky, who was calm from the dance floor.

The crossdresser, however, didn’t welcome it for long and threw his table water at her.

Although the bottle did not meet its target, Papaya Ex did not restrain from continuing her jabs at Bob with her gang.

In another clip, Papaya could be seen giving a mocking dance step to Bobrisky, who was trying to maintain class at the event.

The crossdresser was so furious that he warned people to stop recording him. Bobrisky even ignored fellow crossdresser James Brown who knelt to greet him at the event.

The battle for class and popularity continued subtly while the crowd jeered on at the party.

On Saturday, Bobrisky and Papaya traded words on social media which culminated in Sunday’s brawl.

The battle of the socialites began when Papaya Ex imitated Bob with her upcoming housewarming party by rolling out invites for her grand party.

Papaya Ex used a similar invite pattern as Bobrisky did in 2021.

In 2021, Bobrisky gave out an invitation package containing a bottle of champagne, perfume and more for his housewarming.

This year, the invitation card from Papaya Ex was accompanied by a bottle of champagne, a glass cup and more gifts.

The controversial crossdresser took to his social media page to criticise the social media influencer, pointing out how she copied his method and mocked her dress, which he compared to a Lagos waste collector’s outfit.

“It’s the gown for me. LAWMA keep Lagos clean. Life no hard now,” he said.

Bobrisky said he leads while others follow and cautioned her to stop struggling as he is already bigger than her.

Before the fight, Bobrisky went live on Instagram to speak about his beef with Papaya. The crossdresser revealed that Papaya imitates his style, steals his brands, and patronises the same vendors as him.

According to Bob of Lagos, Papaya copied all his styles to be bigger than him in influencing business and beauty.

In another post, he disproved that they are friends “We are not friends, and we can never be friends, we are not the same age mate, when it comes to the money she doesn’t even half of my money, she is trash, she looks dirty, razz, ” he said.

He challenged Papaya and threatened to beat up the influencer while encouraging her to maintain the same energy when they met in person.

National Health Dialogue: Five things you should expect from 2022 edition