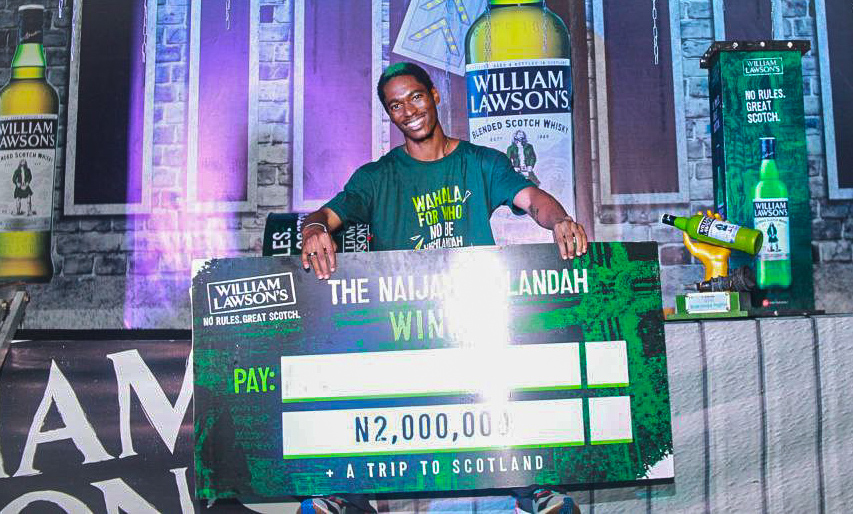 Guests at the event, organised by William Lawson, were entertained by 'Gongo Aso’ crooner, 9ice, Orezi, ARB Band, and other musicians.

After a series of nerve-cracking games and competitions, Akinwale Awatt, an Economics undergraduate at the National Open University (NOUN), emerged as the winner of the inaugural edition of Naija Highlandah.

Awatt conquered every obstacle, earned his kilt, and the bragging rights as the first-ever Naija Highlandah champion, winning a trip to Scotland and a cash award of N2 million.

The hunt by William Lawson’s, a Scottish whiskey brand, for this coveted role began on 6 October with the ultimate battle between 15 contestants: 13 males and two females.

The organisers were on the search for the bravest, bold, and most humorous person to represent the iconic Highlander brand this year.

The contestants proved their grit, heart, and wit, competing in tough challenges for the top spot during the competition held across Lagos State.

The ARB band opened the event with an energetic performance at The Stables, Union Bank Sports Ground, Lagos, the finals venue.

At the same time, guests at the event, organised by William Lawson, were entertained by ‘Gongo Aso’ crooner, 9ice, Orezi, ARB Band, and many more.

The organisers proceeded to the final round of their games, beginning with the obstacle courses and moving to the bull ride.

The brave finalists showed they were up for even more challenges, showing up at The Stables for their final opportunity to stand out from the rest and be named the ultimate Naija Highlandah.

The winner, Awatt, proved to be Nigeria’s most unorthodox and fearless person by defying expectations, overcoming obstacles, and defeating his competitors.

There were also bold challenges, including the walk-a-plank game involving men in high heels who were timed and needed to walk briskly on raised thin planks.

Awatt, who hails from Lagos state, is an entrepreneur and a talent manager.

A food lover who enjoys cooking more than anything else, he is the Manager of Tiamo Catering Services and loves football and swimming.

After his win, Awatt said, the contest has motivated many Nigerians, including him, to come out in big numbers and be fearless.

He said, “I am thrilled to be a part of it and looking forward to the trip to Scotland.”

2022 World Cup: Oliseh to work with Wenger, others in Qatar