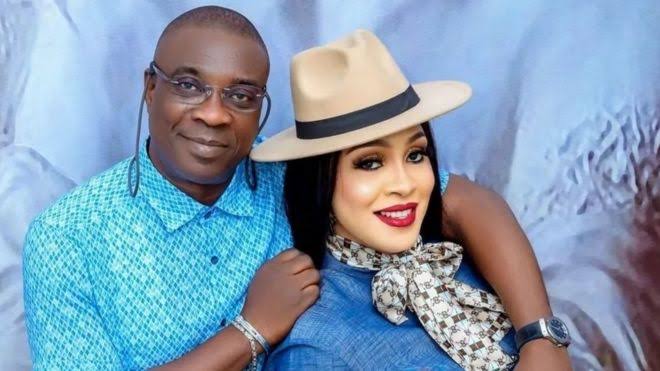 The lovebirds had a grand wedding ceremony on the 18th of November, 2021, at the Palace of the Alake of Egbaland, Ake, Abeokuta, graced by over 30 monarchs.

About a year ago, Veteran Fuji musician, King Wasiu Marshal, better known as Kwam 1, assured his new bride, Emmanuella Ropo, that she was his last bus stop, and he appears to have kept his word.

The lovebirds were wedded on the 18th of November, 2021, at a grand wedding ceremony at the Palace of the Alake of Egbaland, Ake, Abeokuta, graced by over 30 monarchs.

They tied the knot after a whirlwind romance that sent Lagos high society talking for months unending.

It was the first time the Fuji maestro would stage a wedding this grand and public. His bride is the only woman he has ever shown off and eulogised on social media.

Eight months later, the singer, at an event in Abeokuta, Ogun State, reassured his bride, saying, “No more pack and go’’ loosely translated, meaning he would not marry another woman.

One year later, on their first anniversary, the music legend gifted his woman a rare diamond ring.

Taking to his verified Instagram page, the celebrated Fuji musician described his wife as an angel sent by God.

He wrote, “A year ago, I announced the beginning of a new chapter in my love life, with the arrival of my Angel sent from the heavenly father, to love, adore and cherish for the rest of my life.”

The singer noted that their marital journey hadn’t been that easy because of ”side talks”.

He, however, said they would continue to weather the storm by the special grace of God Almighty.

For Emmanuella, the past year has been one of love, sweet memories and care.

She posted a clip of an impressive diamond ring she received as a gift from her husband on their first anniversary.

“Waking up to this diamond ring gladdens my heart, an illusion of seven pieces stuck together, giving an invisible setting where the diamonds are set to symbolise eternal love, invincibility and emblem of devotion,” she wrote in appreciation.

In another post, she thanked the 65-year-old musician’s children, her stepchildren, for the undeniable love and care they have shown her.

“You made your father’s dynasty a happy and peaceful place for me. I appreciate you all. These pictures represent all omo ojushagola goji. May we forever enjoy peace and harmony in our home In Sha Allaah,” she added.

The Fuji maestro has several wives who have borne him a total of 40 children.

His first wife, Opeyemi Titi, has three children with the musician and one from her previous relationship.

He welcomed his 40th child in 2017. One of his wives, Yewande, lives in Canada with her children.

Before Emmanuella, a mother-of-three from a previous marriage, came into the picture; Titi Masha was the only woman in his life.

On his 61st birthday, registrars from the Ikoyi registry conducted Kwam 1’s marriage to Titi at his Ojushagbola Castle, Ijebu Ode, Ogun State, in March 2018.

Titi runs an upscale fabric store in Surulere, Lagos. She has had three kids for KWAM 1, who was known to be a confessed polygamist.

Their relationship became official after she welcomed Kwam1’s 38th child in the U.S. in 2013.

Today, Emmanuella, a dashing beauty in her 40’s, whom he fondly calls ‘Nuella Ajike Mi’, is the latest woman in his life.