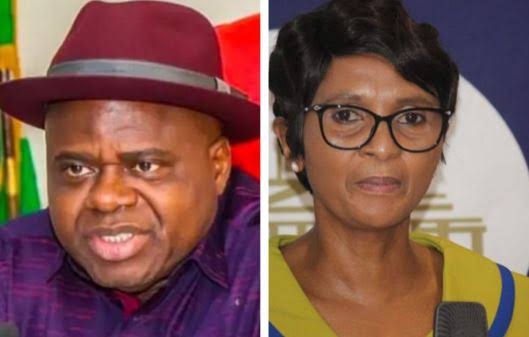 On Thursday, Ms Sifuba accused a Nigerian man of leaking a sex tape involving her and has reportedly opened a civil case.

On Thursday, Ms Sifuba accused a Nigerian man of leaking a nude video involving her and has reportedly opened a civil case after the explicit video was circulated on social media.

According to her, the man released the video after she refused to pay R300 000 (N7m) blackmail money.

The Free State Legislature quickly responded by ordering an investigation into the scandal,l describing it as Gender-based violence.

Hours later, a Facebook account purportedly belonging to Ms Sifuba made a post alleging that the governor of Bayelsa State was behind the leaked nude tape.

The post reads, “This is the picture of the man who leaked our video. He is my lover whom I trusted—a Nigerian Official, Douye Diri.

“I trusted him with my life, but he betrayed me. Please share for the whole world to know the kind of man he is.”

Reacting, the governor said he doesn’t know, let alone have contact with Sifuba, who is at the centre of a trending leaked nude video in South Africa.

Speaking through his Director of New Media, Kola Oredipe, the Bayelsa governor said he had not been to South Africa in the last ten years.

In a statement, Mr Oredipe described media reports linking the Governor to the trending story involving the female parliamentarian as a mere distraction.

The statement reads in part, “The post linking the governor to the allegation suddenly appeared on the Facebook page purportedly belonging to the woman after trending for more than a week.

“Our investigation, however, revealed that the said account is fake and was only created on Thursday, 10 November 2022.”

He stated that for a scandal that initially appeared in the South African media space on October 31 and was first linked to a ‘Nigerian youth,’ it is obvious those behind the new twist opened the parody account with the deliberate intention to tarnish the image of the Bayelsa Governor.

“Let it be stated without any equivocation that Governor Diri does not know and has had no contact nor relationship with the said woman at the centre of the scandal. He has also not been to South Africa in the last ten years.

“While we have read about a purported attempt to collect R300,000 from her, the ‘young blackmailer’ is certainly not Governor Diri,” it reads.

He further ascribed the accusation to political mischief-makers, who he said have gone on overdrive in their desperation to tarnish the reputation of the Governor of Bayelsa State.

Meanwhile, the Consulate General of Nigeria, based in Johannesburg, noted the numerous media reports alleging that a Nigerian national is involved in the leaking of the nude video.

The Nigerian diplomatic mission said the circulation of the video is a blatant disregard for Ms Sifuba’s privacy.

“The Mission unequivocally condemns and distances all law-abiding Nigerians from the egregious and reprehensible violation of Hon Sifuba’s privacy by anyone, whether Nigerian or not,” a statement from the consulate read.

It notes that the unsubstantiated allegations that the perpetrator was Nigerian will likely put the lives and property of law-abiding Nigerians in South Africa in danger.

“While awaiting the outcome of investigations into the real identity of the perpetrator of this heinous crime, the Mission wishes to call on the media to refrain from hasty and definitive conclusions on the nationality of the suspect as this may put the lives and property of law-abiding Nigerians in South Africa at risk,” the Consulate said.

It further assured the host authorities of its full support and cooperation towards the identification, tracking, arrest and prosecution of any Nigerian believed to be responsible or complicit in the mindless circulation of the sex video.

Other South African political groups, including the Economic Freedom Fighters (EFF) and the African National Congress Youth League (ANCYL,) have condemned the circulation of the nudeges.

The South African media joined in calling for the prosecution of the individual behind the nude video.

The country’s Film and Publications Board (FPB) also approached Twitter to have it remove the sex tape of Free State Legislature Speaker Zanele Sifuba.

Ms Sifuba, whose full name is Ntombizanele Beauty Sifuba, is a South African politician and educator who has been the speaker of the Free State Provincial Legislature since May 2019.

The politician and activist, a member of the African National Congress, obtained a bachelor of arts in education from Vista University in 1988.

She also holds a Bachelor of Psychology from the Central University of Technology. In 2017, Sifuba attained a postgraduate diploma in governance and political transformation from the University of the Free State.

Ms Sifuba worked as a teacher from 1999 to 2019. She also worked as the deputy director responsible for monitoring and evaluation at the provincial Department of Social Development.

In 1995, she was elected deputy secretary of the African National Congress in the party’s President Steyn region. She also held leadership positions in the South African Democratic Teachers Union.

Although it is unclear whether she is married, Ms Sifuba is said to have three children.

Before the leaked nudes incident, she was not known for anything controversial.