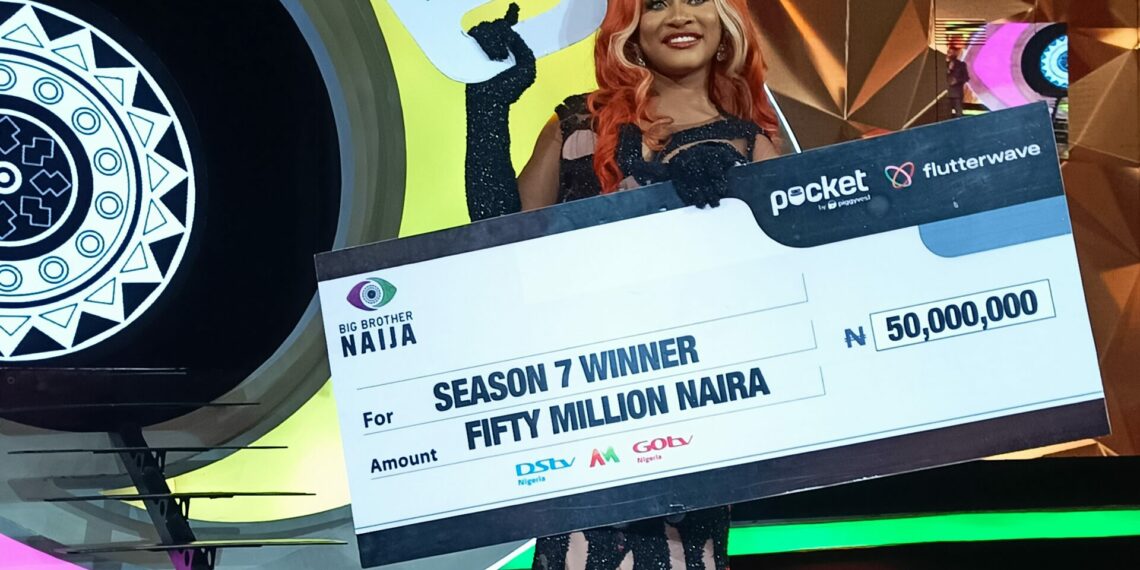 As BBNaija season 7 winner Ijeoma Otabor, aka Phyna, settles into celebrity status, she has revealed how she hopes to invest her N50m winning prize.

Phyna, who said she auditioned for BBNaija four times, emerged winner of the keenly coveted reality show on 3 October.

Her rewards include the N50m cash prize, a top-of-the-range sport utility vehicle (SUV) from Nigerian automaker Innoson Motors, a trip to Dubai for two packaged by TravelBeta, and a year’s supply of Pepsi, among other prizes totalling N100m.

In an interview on TVC’s eSplash, the BBnaija star spoke about her plans, saying prior BBNaija, her interests revolved around entertainment, especially the hospitality sector.

“The fact that from my head to toe is entirely entertainment, you should be ready to see different content, not just on one part. It would help if you were prepared to see me in the comedy line, the hype line. Im going to have a farm, so people can come and buy raw food from me.

With time, I’m having, opening a club, and then you can come and party in my strip club and lots more.”

The hype priestess, as she is popularly called, recalled the defining moment won BBNaija season 7, saying she was shocked when she won.

“When I heard my name as the winner, I was trying to check if there was any similar sound between Phyna and Bryan because it was not clear, but when everybody was like ‘who dey’ I was like, okay, I think that is me.

“That day, I did not hear Ebuka clearly, but I was shocked because that day I was coming to chest the First runner-up with my full chest. I was not expecting a win. Just call Bryan and let us be going. I have never watched big brother. I auditioned four times, and any year they don’t pick me, I don’t watch. It was inside the house I learnt White Money also used the slang Who Dey breathe.”

She recalled speaking on the gifts and reception when she told a fellow housemate she did not own a single wig but planned on buying.

“The funniest part is I have not even bought wigs, but I have a lot and a lot of gifts ” she said.

Moments in the house

Phyna also revealed she could not adapt to the alarm system while in the house, so she ignored it.

“It was terrible, and it got to the extent I stopped hearing it again. In my room, my speaker was on top of my head. Once that thing is sounding, it is just wasting its time. It stopped waking me up.”

Recalling an awkward moment when she got called by biggie while making out with Groovy, she said, “On the normal grounds, I would get angry, but it was my helper that called. I needed to go.”

Reminiscing on another funny moment, Phyna explained what happened when she had to make a pitch to Chi Chi, who was head of the house.

“Chi Chi is my girl. At that moment, I didn’t know what to say to her, so I told her, let’s do what makes us happy,” she said.

The 25-year-old model also spoke on her relationship with fellow housemate Amaka.

“When I came out, I got to see some interviews, and a lot of people would be like, Amaka came out, and she ws bashing, dragging. What I said regarding congratulations was that “no matter what anybody says, you will congratulate me.

“For Amaka and me, I don’t have issues with her, of which I know the issues we had. I tried settling that in the house and apologised to her three times.”

Speaking further on the matter, she revealed she still relates with Amaka.

“On coming out, I met the whole thing; she still had it in mind till she came to me to tell me Phyna, this is it, I don’t have issues with her. I still talk to her anytime I see her at parties and dance with her. I vibe.”

She acknowledged she had no regrets about her performance on the show, “No, there is no moment I regret in the house because everything that happened in the house I dey chest am with my full chest.”

The street queen also clarified that her issue with Bella and Sheggz while in the house was just a case of the destructive manner of her approach.

“That day, I was sitting on my chair, and they told me Eloswag that you should give us the food was rude.

When Eloswaga and Chomzy came downstairs, Bella was telling Chomzy the issue, I looked at them, and I said please, you can have this conversation later and that was when things escalated,” she said.

Speaking further, the N100m grand prize winner explained she did not have a strategy while participating in the show.

She said, “I didn’t go there with a strategy, the fact that they just called me for lockdown that I have been picked, I just went there to do me, and I didn’t even finish doing me. I wish we had longer time; I’d have finished it.”

Plans for the future

When asked about her relationship with Groovy, she reluctantly said, “The energy is good; it’s a private thing.”

Phyna explained that her plans to cater to her parents’ health were in motion, although her dad’ had decided to keep his money.

The self-acclaimed hype priestess also revealed that she intends to make it a business and meet up with Dotun.

She said, “Yes, I will continue hyping, and Dotun, you know we’ve been busy, I saw him at my winners’ party and a media round-up, so I want to meet him. I (will) chewing-gum am, make I dey learn more. The hype thing is, make I just finish all these things first, you people will know.”

Phyna also cleared the air on the issue of having a baby. She said, “She is not my child. She is the daughter of my late cousin’s wife, who died at CS. I’ve been taking care of the baby since then; that’s why people think she is my child. I plan on bringing her with me, but I need all this busy world to reduce.”

On how she deals with the trolling and negative energy she gets, she said, “I don’t know why I have trolls online, and I want them to know that I am from the street; if not for management, I would be Pro Max when it comes to replying to trolls. If I reply, he would think for like 30 minutes. But because of rules and regulations, I am keeping calm.”