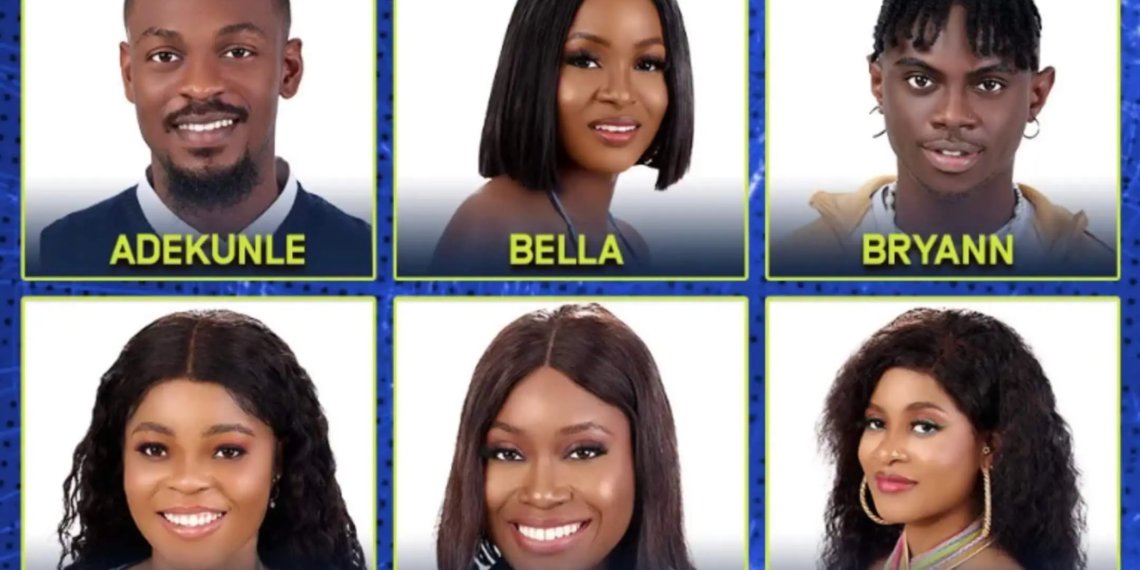 After weeks of intrigues, the 2022 edition of the Big Brother Naija reality show comes to an end on Sunday night.

One of the most watched shows on television, the show, which is in its seventh edition, is now left with six finalists.

On Friday night, the show witnessed a surprise eviction as two housemates, Chizzy and Rachel were sent away from the BBNaija 7 House.

The show, anchored by TV personality Ebuka Obi-Uchendu, has kept millions of viewers entertained for 72 days.

Tonight’s winner will take home the coveted N100m worth of prizes, including N50m cash and N50m worth of other awards from the show’s sponsors.

Below, are the last six remaining contestants and how they stand.

The BBNaija7 would pull any surprises; it would be Bella winning the top prize.

Although she made it to the finals, she is not considered a strong contender.

However, she’s had her moments. She was listed by search engine Google as one of the most searched housemates.

She is the daughter of the late Obi Ofala of Onitsha and the sister to singer Flavour’s baby mama Sandra Okaegbue.

Daniella probably has had the most eventful time in the house.

She was caught on camera with her fellow housemate, Khalid, cuddling and kissing under the duvet as they shared a bed.

The 22-year-old contestant writes poetry. She also acts and sings; that is when she is not working out and staying fit.

Daniella loves meeting new people and describes herself as resilient, energetic and observant.

She has a twin brother whom she says is an albino.

Although she just got out of a toxic relationship, Daniella still believes in love and is open to finding it one day.

Her making it to the finals puts her in strong contention for the prize.

In the ninth week of the competition, Chichi emerged as the Head of House, earning her a spot in the season’s finale.

She also saved co-contestants Daniella and Phyna with her supreme veto power.

Chichi emerged the HoH after all housemates participated in a keen contest game, except the then Head of House, Phyna.

Chichi says she had a painful childhood but rose above it all.

Adekunle is one of the strongest contenders for the prize money. A level 1 housemate, Adekunle’s stay in the house has been eventful.

He won the Head of House title for the three weeks. To emerge Head of House the third time, Adekunle won the final contest with 25 points, while Level 2 Housemates, Pharmsavi and Khalid, finished with 23 points each.

Before entering the competition, he said that he hoped to win this season of Big Brother Naija so he could help his mother pay off her mortgage, loans and debt.

A man of many parts, Adekunle creates adire designs.

Phyna broke a jinx in the house by becoming the first Level 2 housemate named the Head of House.

Before her emergence, only Level 1 housemates one the coveted title.

Phyna beat Daniella, Adekunle and Sheggz in the second round of the Head of House games to emerge a winner.

The 25-year-old Ijeoma describes herself as “allergic to malice”. She also considers herself jovial.

Bryann is also one of the strongest contenders for the star prize.

His fans on Twitter have been rooting for him, perhaps more than any of the remaining contestants.

A Twitter user, Miss Joy Love, claims to have insider information that Bryann is the winner of BBNaija7.

In her tweet, she is asking the organisers of the show to hand over the prize money to Bryann already.

“Dear @BBNaija, can you please hand over the 100 million to Bryann as one of your evicted HMs already told the finalist the results? Why should we need to watch the finale show again?”

Dear @BBNaija, can you please hand over the 100 million to Bryann now as one of your evicted HMs already told the finalist the results? Why should we need to watch the finale show again? #BBNaijaSeason7 #Bbnaija pic.twitter.com/AUX5jXcmJn

Although Bryann has been in the public eye since 2019, he began to gain more attention after he made it into the “Level Up” house.

Not a poisoned chalice, By Wole Olaoye