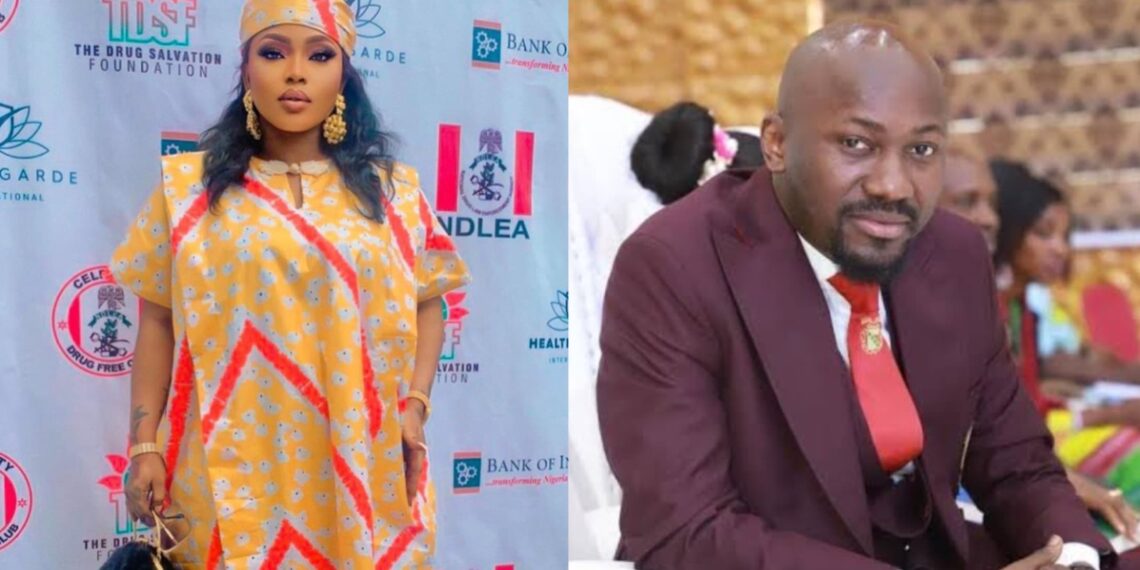 For months unending, Halima Abubakar accused Apostle Suleman of reneging on his promise to marry her and said he was responsible for an undisclosed life-threatening ailment that had plagued her for years.

For months unending, the erstwhile famous actress accused the controversial cleric of reneging on his promise to marry her and said he was behind for an undisclosed life-threatening ailment that had plagued her for years.

She alleged that Mr Suleman had sexual affairs with several actresses, including Shan George and Iyabo Ojo, a claim the cleric and his handlers ignored.

Ms Abubakar, who began acting in 2001 when she played a minor role in ‘Rejected’, revealed that she had an affair with the preacher because he told her he was a divorcee with three children.

On Instagram, she said that her life was in danger and that ther cleric should be held responsible for whatever occurs her.

“Pls don’t worry about me. But you can hold Johnson Suleman responsible, just in case.

“You can’t do anything, though. Nigerians are aware. If anything happens, Johnson, it’s you’’, the 37-year-old actress wrote on Instagram.

Mr Suleman, through his legal representatives, Ephesus Lex Attorneys & Solicitors, has issued the actress a cease and desist notice.

The notice was in response to the actress’s alleged defamation against the pastor and some of her colleagues whom she accused of having sexual affairs with him.

“The comments which have been in the public space for a while. It recently resurfaced again. On the strength of that, we issued her a cease and desist notice,” he said.

He further said that failure to comply will lead to a civil suit against her.

“Whether there will be a public complaint to the police or other law enforcement agencies is not within our purview.

“We are hoping that she will listen to the voice of reason. If she does not, we will extend our actions to taking a writ against her,” he added.

In the notice signed by Mr Adzuanaga, the cleric accused Ms Abubakar of publishing malicious, defamatory, and demeaning statements about the apostle on several microblog sites, chiefly Gistlover.

The letter, a copy made available to this newspaper, states that the defamatory statements published by Ms Abubakar on her Instagram handle not only attribute that the Apostle is diabolical but that he is responsible for whatever medical condition she is suffering.

It says that the statements are false, untrue, malicious, defamatory, baseless, and a tool for blackmailing Apostle Suleman while reducing him in the eyes of responsible and right-thinking members of society.

“We, therefore, demand that you cease from further publication of the said defamatory statements or any other statements and or publication intended to injure the reputation of our client,” it stated.

Other than restraining herself from further comments, it stated that Ms Abubakar must publish a retraction of her earlier statements in five national dailies within three days from Thursday.

They also demanded that she delivers a letter to the Apostle stating her full assurance and undertaking that she will desist from publishing previous and further defamatory statements against him.

She must also repay him for all costs incurred in defending and protecting his reputation.

Despite the notice, the numerous allegations are still visible on the actress’ Instagram page which boasts 1 million followers.

This is not the first time Apostle Suleman will be initiating legal proceedings against his accusers.

In 2018, Nigerian singer, Stephanie Otobo, alleged that he indulged in immoral acts with her.

Following the allegations, the Canadian-based Nigerian singer was arrested by the clergyman and spent some days in Kirikiri prison.

Ms Otobo, whom the fiery cleric accused of blackmail, a threat to life, conspiracy, and intent to steal from him in 2017, resumed her damning accusations backed with what she described as receipts.

The dancehall singer, whose stage name is Stephanie D’ocean, also released a diss track and photo she claimed was the pastor’s ‘genitals’ on a Twitter thread and said he planned to kill her.

Also, a Youtuber, Israel Balogun, was arrested in 2021 for criticising Apostle Suleman.

The police detained Mr Balogun after he posted a video clip of Mr Suleman on YouTube, praying for the audience to receive mysterious money alerts.

He was released after meeting his bail conditions.

Earlier in the year, the popular blogging site, Gistlover, published the names of some actresses Apostle Suleman allegedly had sexual affairs with.