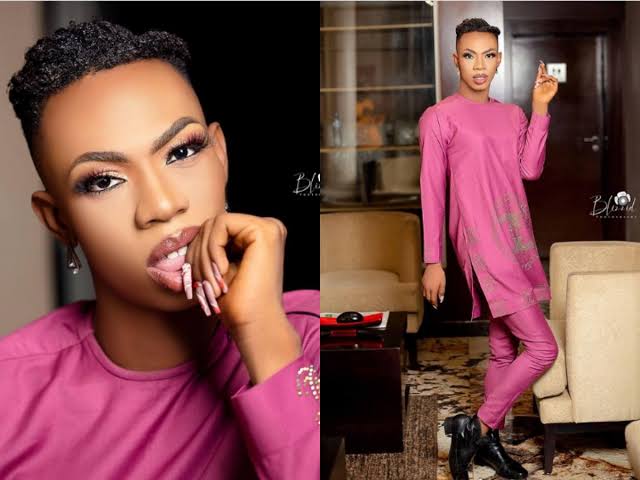 "Sometimes, I want to change to a girl, but other times I'm confused".

Despite identifying as a ‘queen’, the controversial Nigerian crossdresser, James Brown, has said he is still undecided about his gender.

Mr Brown was a guest on ‘The Frankly Speaking Podcast’ hosted by popular OAP, Nedu, Naomi, Toun and ‘Husband Material.

During the interview session, Brown also noted that being a drag queen does not define his sexuality because he has a girlfriend.

Asked whether he would like a sex change, Brown, who also goes by the Queen of Africa, said he delved into the world of cross-dressing without a vision or a plan.

He noted that when it comes to defining himself and his gender, it is more complex.

He was in the company of another crossdresser, Tobi the Creator, and his sister, Gracious Brown.

Mr Brown said when he travelled to the UK for school, he understood his sexuality better.

“I once told Tobi I don’t want to be a girl anymore. It goes back and forth.

Sometimes, it doesn’t just sit nicely in your brain. Sometimes, I want to change to a girl, but other times I’m confused,” he said.

Brown, who said he prefers to be called a drag queen, revealed that there was a time he wanted to change his entire body and go for therapy.

The Queen of Africa

Brown, who studied Business Management, Brand Management and Marketing in the UK, said the Queen of Africa is his alter ego.

He further stated that no personae control the other as they work together.

“James Brown is the business guru. That’s why I’m cashing out. The Queen of Africa is the one with the beauty, the class, the elegance, and the content. So both of them cannot work without each other.

“I used to say, oh, it’s not my lifestyle, so I dress like a guy at home. Now, I don’t even dress like a guy. I don’t wear pants. I just let everything fly out. And I sometimes wear my hair,” he said.

Brown admits that he’s yet to strike a balance between the hustle and his lifestyle.

He said although he is more girly now, being a drag queen does not define his sexuality.

“It does not define my sexuality because I have a girlfriend. It’s a new development.

Speaking during the interview, Brown’s sister, Gracious, said he has always been effeminate from a very young age.

She noted that the difference was that back then, he didn’t dress like a woman.

“I enjoy everything he does. That is life. There is nothing to accept. I see him as both my brother and my sister. I had always supported him, even when he was nothing,” she said.

Crossdressing and the Nigerian law

In April, the House of Representatives introduced a bill prohibiting cross-dressing with an amendment to the Same-Sex (Prohibition) Act.

The amendment, sponsored by Muda Umar (APC, Bauchi), seeks to amend sections 4 and 5 of the principal act.

This proposed bill, if passed into law, could affect James Brown and his arch-rival, Idris Okuneye, popularly known as Bobrisky.

The bill was read for the first time on the floor in April.

The 2013 Same-Sex Prohibition bill was signed into law by former President Goodluck Jonathan despite opposition from the international community, particularly the United States and the United Kingdom.

The proposed bill exempts the use of cross-dressing for stage acts and other means of entertainment.

James Brown became famous for saying, “They did not caught me,” when he was arrested and paraded by the Nigerian police in 2018. He also claimed to have been infected with HIV at birth.

He was arrested alongside 46 other men for being allegedly gay and spent a month at the Ikoyi Correctional Facility. A court later dismissed the case against them.

In 2021, James Brown released a single titled “Hey Dulings,” a catchphrase he uses to address his fans on social media.

Gradually, he began to maximise the opportunity of being an internet sensation. He soon gained even more popularity for dramatic grammatical errors, and he groomed himself into a brand influencer, an actor, a comedian, a crossdresser, and a social media influencer.

He is currently verified on Instagram with over 1 million followers.

Looking beyond Buhari: The protracted failure in fighting corruption, By Uche Igwe