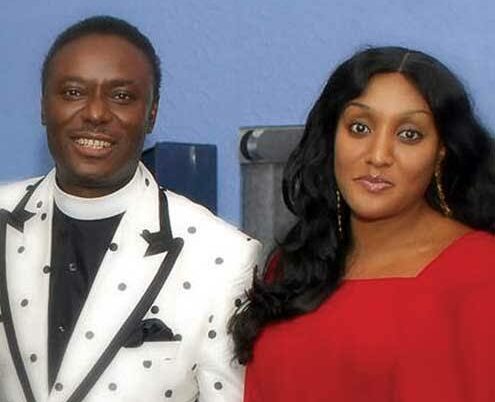 In June 2012, Pastor Okotie informed his congregation that his second marriage was over with no chance of reconciliation.

Popular Nigerian preacher Pastor Chris Okotie has said that the issue of marriage is a closed chapter in his life.

In an exclusive interview with BBC Pidgin, the former presidential aspirant said he did not intend to marry again.

The stylish preacher and founder of the Household of God Church said it was because Jesus told him he was done with that issue (marriage).

“God told me that He didn’t call me to get married. He said “He called me to be like Paul, but He tried to stop me, and I didn’t listen at the time”.

“The life He called me to live is to be dedicated to Him and the work He called me for. So marriage is not on the menu again,” Pastor Okotie said.

In 2008, he married a mum-of-three, Stephanie Henshaw, a union which ended in 2012 when he asked her for a separation.

The union was a media sensation.

Sadly, it failed to stand the test of time.

In June 2012, Pastor Okotie announced to his congregation that the marriage was over with no chance of reconciliation.

In the interview, which was conducted in Pidgin, Pastor Okotie said that he constantly desired his own family and so tended to walk outside of the will of God.

But when it didn’t work out twice, he had to seek the face of God to know what the problem was.

The 64-year-old cleric said that he was in university when he became born again and did not understand the will of God in his life.

He also said that he considers himself to be one of the best husbands ever on this earth, and people who know him can testify.

Pastor Okotie, who has contested the Nigerian presidential election three times, said he has not given up on that ambition.

Pastor Okotie first ran for President under the aegis of the Justice Party (JP), led by Ralph Obiorah. He initially hoped to run under the National Democratic Party (NDP) but didn’t make it past the primaries.

Not one to give up, in 2007, he contested on the platform of a party he founded, the Fresh Democratic party, FRESH.

Then in 2011, he ran and was unlucky a third time and stopped contesting.

He contested under the Justice Party he founded and the Fresh Democratic Party.

Contrary to popular opinion, he said he still intends to run for the highest office with God’s permission.

According to him, when God speaks, He always speaks in the present.

This, Pastor Okotie said, may confuse listeners of the word as it may take time for the prophecy to come to pass.

In that light, he said that he is following the process because he knows that Nigeria’s system of governance is not workable.

“I don’t want to join the PDP, APC or any of the big parties because if I do, I will become a part of the problem,” he said.

He further spoke on Nigeria’s governance system, stating that it cannot bring about the desired change.

“The kind of politics we run here, I call it ‘partisanism’ because it is all about the party.

“It is a party government, by the party and for the party. This is not democracy.

“Democracy should be a government of the people, by the people and for the people. That is how it should be.

“If we are to practice a democracy that has to do with the people, then it must come from the people and belong to the people.

“What we have now, I call it ‘Aboriginal Democracy’. That means we are going back to the original,” he noted.

Pastor Okotie attended the Grace Fellowship Bible School in Tulsa, Oklahoma, after which he founded the Household of God Church.

He studied at the University of Nigeria, Nsukka, in 1980 when he released his first album, ‘I Need Someone.

He released four other popular albums before bowing out of the Nigerian music industry altogether.