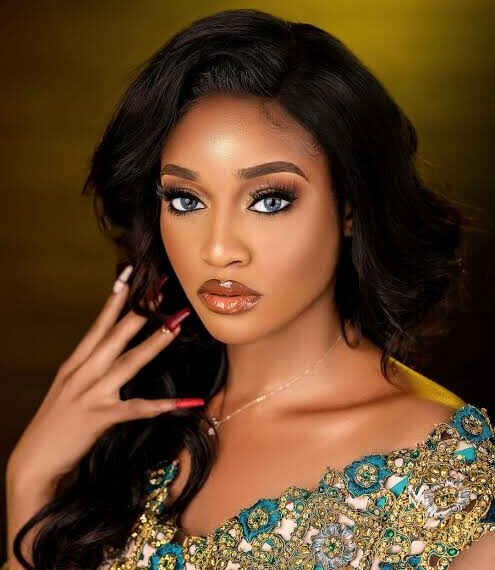 Beauty Tukura, the disqualified season 7 housemate, in her first-ever interview post-BBNaija with host, MizVick, said she fell in love with fellow housemate contestant Groovy because of his personality.

When asked what attracted her to Groovy, she replied: “Most of the guys I date are very calm; it was his calm demeanour; he does this thing where he just looks at me straight in my eyes, and you know he’s just always looking”.

Ms Tukura, who hails from Taraba State, said she developed ‘‘real emotions’’ toward Groovy, and they began dating before the second week, after the first Saturday night house party.

She explained they had a conversation under the duvet where they agreed to get into a relationship.

During the interview hosted on GoTv’s Unlocked show, the 43rd Miss Nigeria admitted that her romantic involvement with Groovy led to acts that eventually disqualified her.

Talking with MizVick, Beauty disclosed that she lost her head in the game because she was moving with her heart and not her head falling in love with Groovy.

She said: “I probably should have moved more with my head than my heart because even Kess said that to me. I think you are moving into this house with your heart, not your head, and you need to swap.”

She further explained that Groovy was more territorial in their short-lived relationship than she was.

On Groovy’s relationship with Chomzy, she made it known she had explained to Groovy that Chomzy was never the problem. She said: “I made it so clear to him so many times that Chomzy is not the issue you are”.

Beauty was disqualified after she was given two additional strikes on Sunday.

Biggie said: “Your actions last night were out of line; you should have managed your emotions. You removed your microphone; you threw another object at Groovy after throwing your glasses, wig at him….”

Beauty had been given a strike last week for her aggression towards Ilebaye, during which she pulled the housemate’s wig.

On Saturday night, Beauty was at it again as she threw her wig and glasses at Groovy and attempted to break Groovy’s microphone.

She apologised for making specific comments about Groovy in the game and for her disappointing exit.

She acknowledged she had gone overboard by reacting the way she did by not controlling her emotions.

Speaking to her fans amid tears, she said: “To everybody who loves me, who has been riding with me, I want to say thank you. I am sorry it ended the way it did; please keep riding with me; I love you guys so much from the deepest part of my heart”.

Meanwhile, her fans have signed online petitions to get her back into the BBNaija house.

They have also launched an online protest asking that Multichoice, the Big Brother organisers, reinstate her in the reality show.