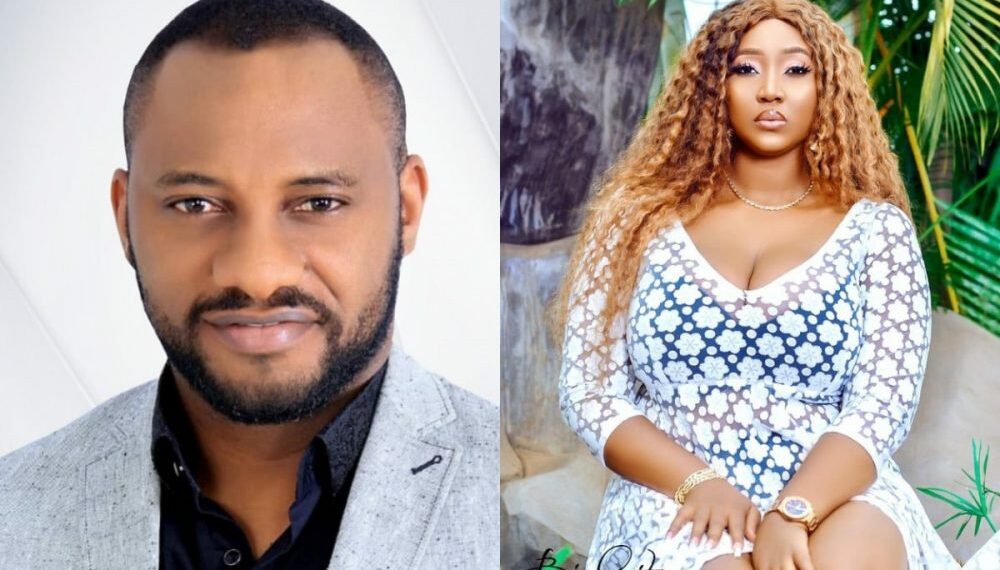 Not all celebrities are lucky in love.

Some stars have had to give marriage a first, second and third shot before they eventually found The One.

And this is where the controversies spring from. Their fans don’t seem to understand why this is so.

Some fail to realise that celebrities are simply human and are bound to make mistakes.

From Kwam 1‘s marriage to Emmanuella Ropo to Mercy Aigbe’s much-talked-about union with top Yoruba filmmaker Kazim Adeoti, one thing is sure – fans are not always keen on celebrity marriages, especially after the first attempt.

Under the attention and harsh scrutiny of the public, celebrity marriages in Nigeria and the world are very much in the public eye.

With social media making it easier for people to share their opinion (solicited or not), Nigerian celebrity couples are a subject of endless fascination and online trolls.

Nollywood actor and movie director Yul Edochie damned fans and family members when he welcomed a son with his colleague-turned-wife-Judy Austin, in 2021.

The 40-year-old actor threw his fans, colleagues and social media into a frenzy after sharing pictures of himself and his baby boy on his Instagram page.

The actor said it was high time the world met his son, Star Dike Munachimso Yul Edochie, whom he loves much as his other children.

As expected, the news wasn’t well-received by his first wife, May.

In the comment, Yul’s first wife, May, wrote: “May God judge you both.”

The couple celebrated their 17th wedding anniversary in October 2021.

Yul and May have four children- Three boys and a daughter.

Their names are: Danielle, Kambi, Karl, and Victory Moghalu is no new face in Nollywood as she has featured in several movies and even starred alongside her dad.

Indeed, a lot can happen in a year or less. On the new year’s eve of 2021, King of Fuji, KWAM1, showed off his romantic side when he serenaded his wife, Titi Masha, during a performance at a party.

The 64-year-old Fuji maestro and his wife earned the admiration of the party-goers as they were locked in a loving embrace for several minutes.

Registrars conducted Kwam 1’s marriage to Titi from the Ikoyi registry at his Ojushagbola Castle, Ijebu Ode, Ogun State, in 2017.

Titi runs an upscale fabric store in Surulere, Lagos. She has had three kids for KWAM 1, who is known to be a confessed polygamist. Their relationship became official after she welcomed Kwam1’s 38th child in the U.S. in 2013.

Today, Emmanuella Aderopo, a dashing beauty he fondly calls ‘Nuella Ajike Mi’, is the latest woman in his life.

Emmanuella marks her territory and does so unapologetically. and authoritatively.

The lovebirds will have concluded their glamorous engagement ceremony at the Palace of the Alake of Egbaland, Ake, Abeokuta, in November 2021.

Regarding Kwam 1, Emmanuella marks her territory and does so unapologetically.

As with his past affairs, the 64-year-old would have opted to keep it on the low. But with Emmanuella, whom he publicly refers to as Nuella, the singer doesn’t hesitate to declare her as his queen.

But the publicity-loving entrepreneur made their relationship public in the first place. Fashionable and enterprising, she is enjoying the publicity that being Kwam 1’s woman is giving her.

KWAM 1 also had other wives who bore him kids. He has been legally married to some women, including Yewande, who lives in Canada with her children.

Like Emmanuella Ropo, Nollywood actress Mercy Aigbe unveiled her man via Instagram on the eve of his birthday on January 23. It was a surprise for her fans. Mr Adeoti, a famous Yoruba filmmaker, movie marketer, and founder of Adekaz Productions, was friends with her ex-husband, Larne Gentry.

Shortly after the Edo-born actress had revealed that she had secretly married Mr Adeoti, her ex-husband wasted no time posting a throwback photo of himself, Mrs Aigbe, Mr Adeoti, and his wife on Instagram. It insinuated that they must have been family friends.

Mr Gentry did not stop there, and he also gave the picture a controversial caption which reads, “At last I thank God the truth is out this is just one out of many to God be the glory. I don’t need anyone’s comment, please.”

In no time, the actress debunked the news that her new husband was friends with her ex-husband. She explained that the pictures her ex-husband posted were from Mr Adeoti’s birthday, which she attended in the company of other movie stars alongside her ex-husband.

At a point, it seemed as though the actress’s decision to make her marriage public appeared ill-timed as some critics were chastising her for “marrying a married man.”

Mr Kazim is a father of four, while his first wife, Funsho, who lives in Minnesota, U.S., is a notable fashion designer and owner of Asiwaju Couture. However, while this is Mrs Aigbe’s third shot at marriage, it is Mr Kazim’s second marriage.

On the other hand, inundated by the goodwill and empathy from Nigerians, Ms Kazim made a cryptic post that suggested that all was not well between her and her husband.

It read, “Losing someone who doesn’t respect or appreciate you is, again, not a loss. Thank you all”.

The actress did not keep mute from critics. In the storm of criticism, she noted that her new husband is a Muslim and is at liberty to marry as many wives as possible.

Mr Adebayo was not just a photographer. He was also a musician who performed under the stage name ‘Dee unknown’. He was also famous as a mask artist.

The lovebirds got engaged on Valentine’s Day, February 14, 2021.

It was the second attempt at marriage by the mother-of-two. Her first marriage, which happened over two decades ago, while very young, produced her teenage daughter, Tiannah, after whom her business empire is named after. Mrs Lawani also has a son, Oluwatenola Jermaine, with Nigerian musician and model Lord Trigg, whose real name is Kensington Womadi.

Despite being one of the most talked-about weddings in the industry, Mr Adebayo’s union with Toyin is controversial. The photographer was married for seven years with two children to another woman named Edel Idoga, who lived in Port Harcourt, and whom he married in February 2015. Mr Adebayo allegedly left his wife and children. He moved to Lagos in search of ‘proverbial greener pastures, where he met the actress and became her photographer. In no distant time, what had started as a working relationship became a love affair.

Sooner or later, the actress has tagged a ‘husband snatcher’ in a series of Instagram posts by Tunez Media. But the actress and the photographer seem unbothered by the allegations, as they are still happily married.

Nollywood actress Elizabeth Anjorin married her childhood friend, Lateef Lawal, in an elaborate Nikkai ceremony attended by some of her friends in the movie industry.

A few months after settling into married life, controversies arose about her husband’s past.

One of his ex-wives, Fola Tinubu, accused Mr Lawal of abandonment. Ms Tinubu claimed that the actress snatched her husband and turned him against her. As a result, she ran into debt and could not feed their three children. It went viral and got lots of Nigerians wailing at the actress.

But while the allegations were gradually dying, the man at the centre of the controversy, Mr Lawal, opened his can of worms. The businessman took to Instagram to absolve himself of all the accusations levelled against him. He also sent all those defaming his name to the gallows.

He said his first wife was one Ramota, also known as Iya Ayomide. He said the union did not flourish, and they went their separate ways; after that, he married his second wife Monsurat in 2006, and they both had their Nikkai ceremony.

After welcoming their child, he allegedly caught her cheating on him. That was before he met Mrs Tinubu, whom he claimed had two children before marriage. He said that he discovered that Mrs Tinubu had two children, and she was no different from his second wife.

Despite all the back and forth with marriages, Mr Lawal is currently married to the famous Yoruba actress, Lizzy.

Before the marriage, no one knew who Mrs Meurer was until the tattoo-loving actress made the news headlines for the first time in 2017 after being accused of ending Tonto and Churchill’s marriage.

At the time, she was an ambassador of Churchill’s Big Church Foundation’s Mother and Child Project.

In an interview on Media Room Hub, Tonto would later reveal that she was aware that her ex-husband abandoned her and their son because of Rosey, whom he “had been sleeping with.”

Among other allegations, Ms Dikeh revealed that her ex-husband gifted Meurer an SUV on her birthday.

Four years later, after several denials, it appears Churchill and Meurer were tired of playing games and wanted the whole world to know that they were officially married.

Five reasons you may feel depressed on your birthday – Expert