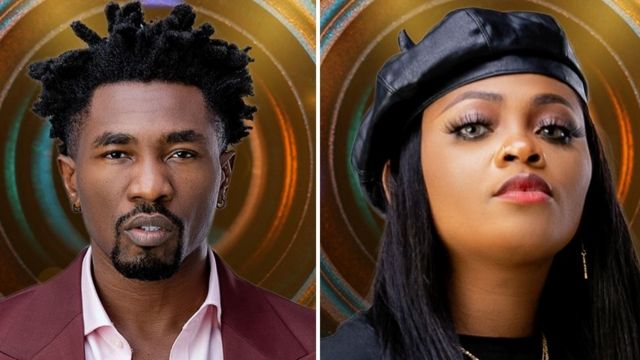 The Big Brother Naija ‘Shine Ya Eye’ edition has witnessed several evictions and drama since it began on July 24.

The Big Brother Naija ‘Shine Ya Eye’ edition has witnessed several evictions and drama since it began on July 24.

However, the first quadruple eviction show on Sunday which saw housemates Tega, Boma, and two other housemates shown the door, is the talk of the town for obvious reasons.

Tega and Boma’s alleged amorous affair was one that took the housemates and viewers by surprise.

Tega, 29, a married mum-of-one was a fan favourite, at least from the onset. Goodlooking, neat, homely, and fun-loving, she cut the picture of what the ideal married woman in the BBNaija house should look like.

34-year-old Boma, on the other hand, described himself as “sexy, intelligent, adventurous, strong and fit”, and considered himself “extraordinary”.

Prior to BBNaija, he has a budding acting career in the U.S. and was popular for his cameo appearance in the ‘Blacklist’ series. To make ends meet, he said he worked as a bartender by night, and a masseuse by day.

Here are some interesting events that characterised Boma and Tega’s controversial relationship.

During the game, Pere and Whitemoney were asked to show their best sex positions, and they using Maria to portray their positions to the housemates amid cheers. Others were paired for 10 seconds kissing with Boma kissing Angel, Liquorose kissing Emmanuel, and Arin kissing Yousef.

The climax of the game was what drew the viewer’s attention to Tega. She was dared to choose a male housemate to suck her breasts for five seconds and the lucky guy was Saga.

August 2, 2021: Tega’s husband on his Instagram page @ajmoney001 urged viewers to stay tuned for more content, adding that his wife is an actress.

He further explained that his wife is an actress, and if that was to be a movie scene, viewers should expect to see more.

August 31, 2021: Boma and Tega shared a 15-second French Kiss in the wildest Truth or Dare game in the BBNaija house.

September 1, 2021: While viewers were yet to digest the reality of the ‘Truth and Dare’ game, a video of Boma and Tega kissing began to make waves sparking missed reactions.

Tega and Boma were seen intimately and passionate kissing during the lights out. There were visible hand movements as Tega slid into the duvet. Some viewers said that the relationship between Tega and Boma was born from the fact that they shared similar marital statuses.

September 2: Tega’s reacted to the kiss saying she is spiting him because he cheated on her.

September 3: During one of the Jacuzzi Parties, Tega revealed that her marriage may be a sham. She asked Emmanuel and Boma what they would do if they found out that she wasn’t married outside the show.

September 4, 2021:Tega undressed in the dressing area in Boma’s presence after they kissed passionately in the executive lounge.

September 5, 2021: Speaking to Ebuka during the live evictions, Tega said she missed her husband, and family. She also said that she would miss Boma, because “he’s my friend.”

September 6, 2021: Boma apologized to Nigerians for his actions in the house via his Twitter account. Tega on the other said she and Boma were only acting out a script to entertain viewers.

September 6, 2021: Boma’s husband during a live chat with Tunde Ednut, a popular blogger on Monday admitted that he was yet to speak to his wife since her Sunday eviction. He also said he was really shocked and broken.