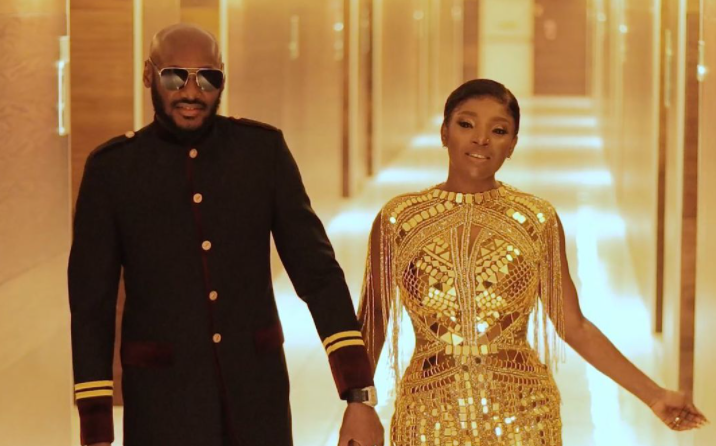 Indeed, trouble seems to have surfaced in the union between superstar singer, Innocent Idibia aka 2baba, and his wife Annie Macaulay.

In a now-deleted Instagram Story post on Friday, she claimed that the singer ‘‘slept under the same roof’’ with Ms Adeniyi and the children (Adeniyi bore him) when they vacationed in Disneyland, U.S.

Ms Adeniyi, 43, who is based in the U.S., is the daughter of a wealthy Nigerian businessman, Jide Adeniyi.

Prior to their ‘public’ reconciliation at the Crescendo Lounge in Ikeja, Lagos, in November 2018, Ms Adeniyi and Ms Macaulay, were erstwhile sworn enemies. 2Baba wept uncontrollably when the reconciliation happened.

There has been a lot of drama between 2Baba, his wife and Ms Adeniyi in the past couple of years – from Ms Adeniyi’s sister calling his wife out on Instagram to photos of and 2face and Ms Adeniyi kissing in a club, surfacing online.

Their frosty relationship took a front burner when photos of 2baba reportedly kissing Ms Adeniyi at the singer’s nightclub back in 2015, broke the Internet.

Just some minutes after the callout, 2baba’s younger brother, Charles, waded into the matter.

Accusing his brother’s wife of drug addiction, Charles noted that she must have taken the wrong drugs from her ‘dealer’ to have come online to talk in that manner, of her husband.

Charles did not stop there. He alleged that Ms Macauley and her mum are engaged in diabolical measures just to keep being in 2baba’s life! He even alluded that the singer was dying slowly and also very unhappy.

Meanwhile, Ms Macaulay quickly responded and reminded her younger brother-in-law of his perpetual dependence on 2baba; hence the reason for her husband’s unhappiness.

However, another member of the Idibia family, Rosemary, decided to address whatever their family has kept from the public about Annie.

The actress, who seemed pained rhetorically said, “What kind of man takes his kids to Disney and spends nights in the same apartment with his kids and their mother!

“How many times have you gone to see your kids with Pero and she stays with you and the kids under the same roof for nights?” she claimed.

The ‘African queen’ further claimed that her husband’s baby mamas use his children ‘as an excuse for all sorts of rubbish’ while urging him to do better.

The mother of two also indicted 2Baba’s manager, Efe Omorogbe, and one Frankie, describing their “move” as “unacceptable.”

In the post, she claimed the artiste’s family has never welcomed her to their home.

“I’m a patient woman, I am not a fool, Innocent! Your family never loved me from the beginning, no matter how hard I tried. I was never worthy to them. I have made so many sacrifices for you and all your children. God knows I have tried.”

It appears that Ms Macaulay’s ‘rants’ did not sit well with some of her colleagues, as they have scolded her for making public the cracks in her marriage.

”No Marriage wahala brought to social media has ever gotten resolved amicably. Instead, it is the beginning of the END. Take your marriage issues to your parents/ marriage counselors….NEVER ON SOCIAL MEDIA,” he said.

Zubby Micheal, an actor, also slammed his colleague for making her marital problem a public debate.

”Any woman that calls you out online is wrong no matter what because a GOD fearing woman with home training will understand that this space is just like a market square. NDI ala NDI ala.”

2baba and Macaulay have known each other since she was 15. The lovebirds got married in Dubai in 2012 and they have two children. 2baba has five other children from other women.

In an interview with Motherhood In-style magazine in 2015, she said she wished she was the mother of all her husband’s children.

The dangers and evils of destructive jealousy/envy (Hasad), By Murtadha Gusau

The truth: Walking on crutches of lies, By Owei Lakemfa