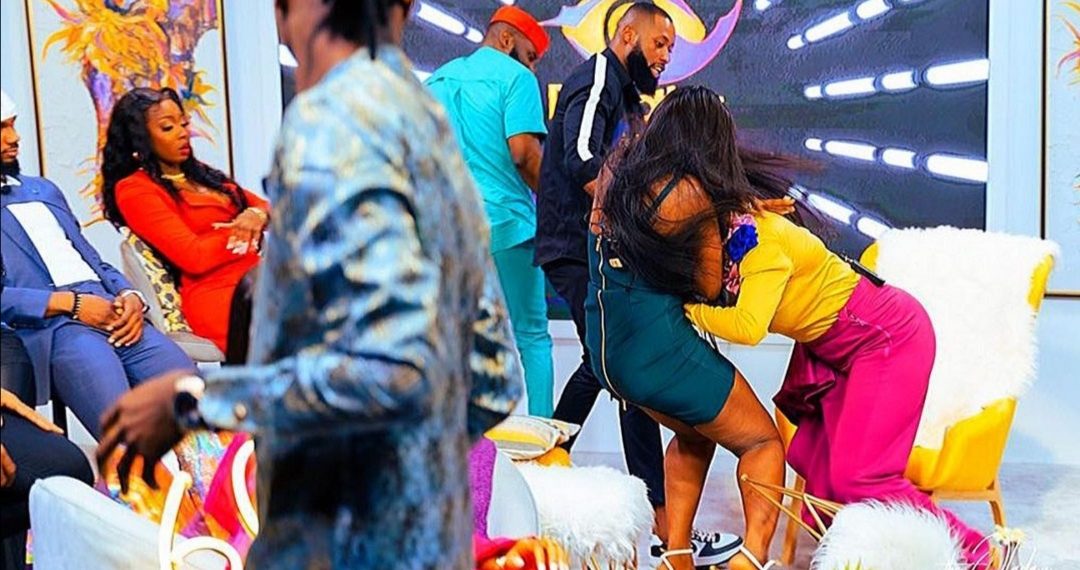 The housemates lost their cool as Ka3na once again took the centre stage in controversial circumstances, leading to a brawl at the Bbnaija Lockdown Reunion show.

The sixth episode of the BIg Brother Reunion show, which aired on Thursday night, was one of the most shocking and emotionally intense episodes yet.

Almost all the ex-housemates lost their cool as Ka3na once again took the centre stage in controversial circumstances.

This led to a very shocking brawl between Kaisha and Lucy. It happened so fast that viewers and their fellow housemates did not see it coming either.

Revealed secrets and personal thoughts of the housemates gave fans a full picture of what transpired while they were in the House.

Allegations of love-triangles and octagon-shaped interests flew back and forth so much that the show anchor, Ebuka Obi-Uchendu couldn’t handle the shock, literally.

The Day 6 of the show, which began on June 17; had Brighto, Kiddwaya, Ka3na, Dorathy, Laycon, Lucy, Nengi, Neo, Praise, Prince, Tochi, Tolanibaj, Trickytee, Vee, Wathoni and Kaisha ready to reveal more about their life in and outside the BBNaija Lockdown house.

While interfering in the friendship issue between Ka3na and Lucy, Kaisha said her mother liked Ka3na and wanted a photo with her. She revealed that her mother first sent Lucy and then her sister, Zainab to ask Ka3na for the photo.

Kaisha said Ka3na asked them to tell her mother to come to her table, a feedback she found disrespectful.

Ka3na said that she thought they were talking about Kaisha’s manager. Though Lucy agreed with Ka3na, she did not explain why she could not deliver the message when she was asked to.

The atmosphere turned aggressive when Kaisha asked them all to stop talking about her mother and Lucy challenged her by asking if her mother is a fruit. Kaisha would have none of it as she threw a pillow at Lucy, an action that earned the former a slap and led to a physical fight.

Why Ka3na unfollowed all housemates

Ka3na explained why she unfollowed her housemates after eviction. She said that she did not have enough time to bond with them before eviction and the comments she heard the housemates make about her was the final straw.

“I unfollowed most of the housemates because of what they thought about me”, she said.

However, Tolanibaj opposed her by saying that Ka3na unfollowed most of them because they attended Nengi’s birthday party, a claim backed by Praise who tagged her as paranoid.

Ka3na described TolaniBaj’s statement as untrue. She said her action was due to the uncomfortable perception they have about her.

Lucy not real with me- Ka3na

Ka3na accused her erstwhile friend, Lucy, of not committing to their friendship. She said, “I was friends with everyone, but I just wanted to be committed.”

“If Lucy wanted to talk, she knew I would leave everything. If it’s on the phone or she wants me to come to the house, I will be there for her and we will talk about things.”

“I just felt like she wasn’t committed or real with me. The first time I had issues with Keisha in the house, it was because of Lucy.”

To Lucy, however, she found the revelation of the teary Ka3na as strange. She said Ka3na had grievances with everyone in the house, which made it hard for her to know what to make of the friendship.

This is the first gathering of the ex-housemates after the Lockdown edition, which began on July 19, 2020, and ended on September 28, 2020.

It has given viewers opportunities to know hidden secrets and messy facts about them.

Wathoni shocked fans by revealing that Dorathy had oral sex with a male housemate which the latter confirmed to be Brighto. In a similar vein, Ka3na called Praise a ‘5-second man’ after their sexual escapade which was earlier thought to be ‘aggressive cuddling’.

Allegations of friendship betrayal also flew around as Vee accused Tolanibaj of trying to snatch her man, Neo. Though the latter confirmed the action, she said it was an attempt to spite her interest, Prince.

Wathoni described Kiddwaya as a ‘Community Boy’, while she had her own share from Tochi. The anchor, Ebuka had receipts to show Kiddwaya as he probed him on the relationship between him and Nengi.