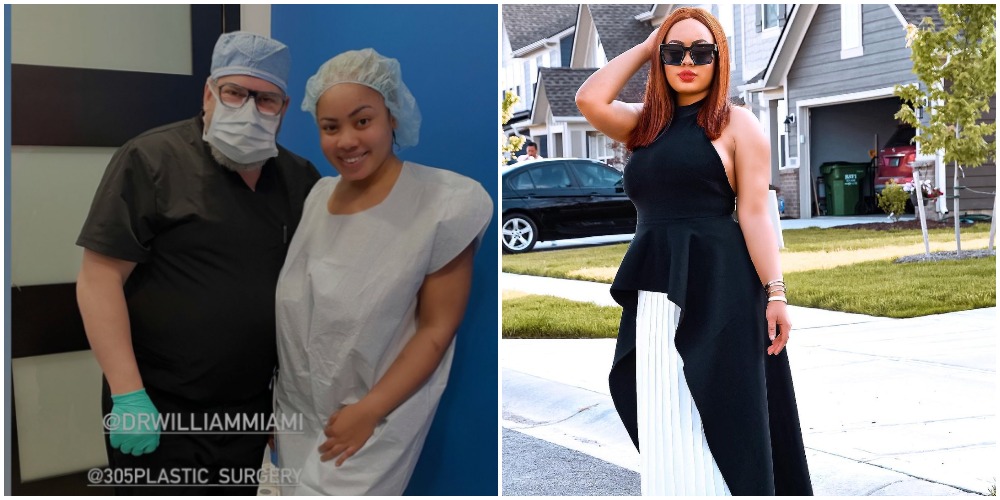 ‘‘Barely three weeks you signed a deal with me, you went ahead to use the money to do plastic surgery. Why didn't you finish the deal as promised since you already collected money from me? I paid you millions of naira!”

An ex-BB9ja housemate, Nina Onyenobi aka Nina Ivy, has been stripped of her brand ambassador deal with Mav Herbals, a butt enlargement brand, after going public with her Brazilian Butt Lift (BBL) procedure.

A Brazilian butt lift is a popular cosmetic procedure that involves the transfer of fat to help create more fullness in your backside.

Nina, a popular housemate in the BBNaija 2018 edition, signed the deal with Mav Herbal barely a month ago.

She has been called out by the brand for sharing photos and videos of herself undergoing a butt enlargement procedure at 305 Plastic Surgery, Florida, U.S.

Nina currently lives in the U.S. with her husband and son.

She bared it all on Instagram and the company has threatened to sue her for breach of contract after openly announcing that she went under the knife somewhere else. They said the action has damaged their public image and made them lose customers’ trust.

Nina has hit back at her critics and described them as hypocrites who are envious of her action. She also said that she informed the company prior to signing the contract.

She said, ‘‘Most of you are suffering from depression because you don’t want your current body and no money for surgery because you can’t afford one. So all you gotta do is to sit and judge. Sis, I got my body done. I took out my fat and put it where I need it more and damn, this my new body is killing. I did it for me and not any of you.”

“And no, I never signed a contract not to have my body done before getting signed by any brand. In fact, I always tell my manager to tell them that I am getting surgery. So all these fuses are a waste of time.”

Following Nina’s response, Mav Herbals blew hot and then proceeded to issue a disclaimer. They also announced the cancellation of Nina’s contract barely three weeks after the endorsement deal was signed.

Their statement read, “How in the world do I explain to people about this damage you have done to my brand? Barely three weeks after you signed a deal with me, you went ahead to use the money to do plastic surgery. Why didn’t you finish the deal as promised since you already collected money from me? I paid you millions of naira!”

“Asides from the fact that I am collecting my full balance back from you, I need a public apology for the confusion you have caused today on social media. I am the last person to be messed with because I know how hard I have worked for my brand. Is it a bad thing I paid you to influence for me?”

They also criticised Nina for not reaching out to them to offer an apology.

As of press time, PREMIUM TIMES was unable to verify the service delivery of the brand as their Instagram account, @mav_herbals has been set to private following bashing by Nina’s fans.

However, a quick check on their website reveals that they provide an array of services ranging from body and beauty enhancements as well as sexual enhancement products.

Nina, who owns a hair and beauty brand, Nina’s empire, has made a name for herself as a beauty entrepreneur.

The mother-of-one, who is married to a man simply identified as Mr Tosh, had her plastic surgery done on June 2.

She joins a long list of Nigerian celebrities like Toke Makinwa, Tonto Dikeh, and fellow ex-housemate, Koko, who have gone under the knife.

Six ways to make him fall deeply in love, marry you