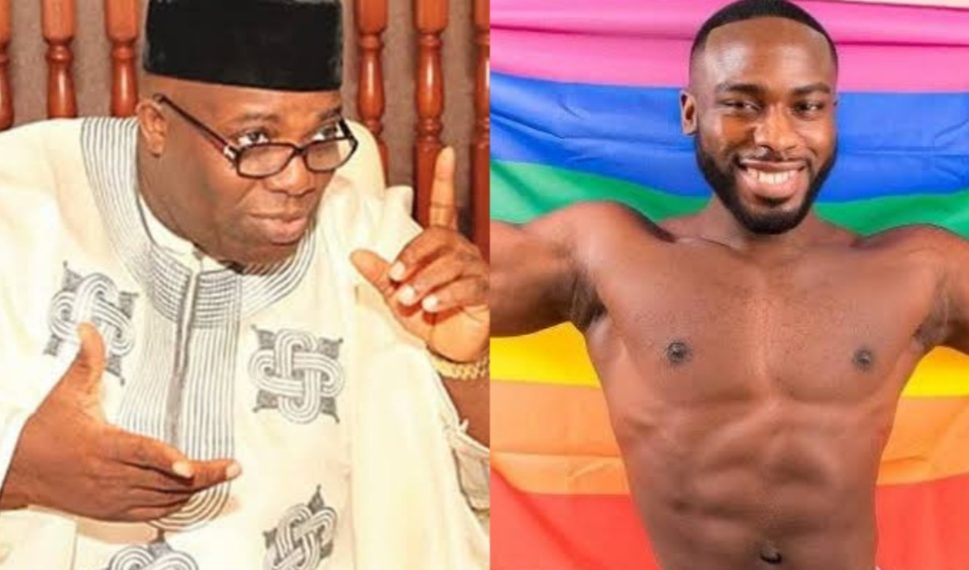 ‘My son is on Godly mission in gay community’ – Doyin Okupe

Mr Okupe says he believes his son is facing a spiritual battle.

A former senior special assistant on public affairs to former president Goodluck Jonathan, Doyin Okupe, has said his son, Bolu Okupe’s presence in the gay community is for a godly mission.

He was clad in a rainbow-coloured underwear and also held a similar fabric in the Instagram photo.

Mr Okupe, however, declared that “he is on a sojourn in the LGBT community in order to be an instrument of God to them. By the grace of God, that is what is going to happen.”

The co-founder of Royal Cross Medical Centre explained that his family had always known about his son’s sexuality and he believes that he got the influence after living abroad for a long time.

He said, “We have always known. We have always known that Bolu is like that and Bolu is even much more than that. It’s incredible what children are capable of doing. Unknown to me, although the other siblings were aware, Bolu had designed his life.

“He never intended to live in Nigeria and I never knew. Unfortunately for me, his mother took him abroad very early, he did a major part of his secondary school in the UK. So, Bolu thinks and lives European. He is my son but his mind is European.

“I also know that Bolu is very easily influenced by his environment, I know that for a fact because he came one time for a holiday and he is somebody who was questioning the bible and saying all sorts of things. He was here for about three months and by the time he was going back, he was hot and he was fire in terms of the scripture and all that. His immediate senior brother is a pastor now. He is very stiff in the religion.”

Mr Okupe, who admitted that he regrets sending his son to Europe also said he is over the initial shock of his son’s coming out and he believes that God knows why it happened.

“He is a little bit of fickle person, depending on his environment. The moment I let him go and stay in France was the worst thing ever possible because that is an extremely liberal society. The family had known that Bolu had that tendency as far back as two to three years before now.

“The problem was coming to announce and all that, and that was when people knew. The day I knew, I wept. I have gone past that, but we are praying for him. I also know, God says my ways and not your ways and he knows the end from the beginning,” he said.

Mr Okupe tweeted said he believes he is facing a spiritual battle. He also confirmed that he is aware of his son’s sexual orientation and is opposed to it.

PREMIUM TIMES reported that Mr Okupe had reacted to his son’s initial revelation earlier in the year, when the heartbroken father said he wished the situation will end up in praise.

In his response, Mr Okupe took to his Twitter page where he first revealed that he had been aware of his son’s sexual disposition.

He said, “My attention has been drawn to a publication of my 27yr old son, Bolu Okupe, in which he declared publicly that he is Gay. I gave him that name Moba Oluwa Rin, (I walked with God) because he was born at the time I gave my life to Christ.

“I have been aware of this his new orientation for a while now. He knows that as a Christian and a witness for Christ (an evangelist) I am vehemently opposed to homosexuality as it runs contrary to the avowed precepts of my Christian faith.

ALSO READ: ”It will end in Praise,” Heartbroken Doyín Okupe prays, as son declares he is homosexual

“For me, I look beyond the surface or the physical. Here I see a major spiritual challenge ahead but I know as my God liveth, this whole saga will end up in Praise to the Almighty Jehova, who I serve day and night. For it is written: Behold, the hand of the Lord is not shortened that it cannot save, neither is His ear dead that he cannot hear. Isaiah 59 vs 1.”

Towards the end of 2020, Nigerian Singer, Charles Oputa popularly known as Charley Boy and his daughter, Dewy Oputa were in the news when the singer went on social media to reveal how he felt about his daughter being a lesbian.

The 70-year-old singer said though he was shocked when his daughter broke the news to him, he felt grateful for the experience of having a gay child and he loves his daughter, regardless of her sexual orientation.

The father of nine also released a phone number for children who found it difficult to open up to their parents about their sexuality to reach out to him. He said that he took over a thousand calls from broken youths before he lost count.

“I heard stories that made me teary eyed, the emotional trauma the LGBTQs community is going through amongst the numerous wahala we face in dis country.

“Parents must understand that sometimes their child will probably not live the life they dreamed for them and this has nothing to do with being good parents or bad parents,” his post read in part.

However, his daughter, Dewy, called him out for being pretentious on social media. She said in a tweet that she got kicked out of the house and had to struggle for food and shelter.

Friday Sermon: How Greed Destroys Us and Our Nations!, By Murtadha Gusau