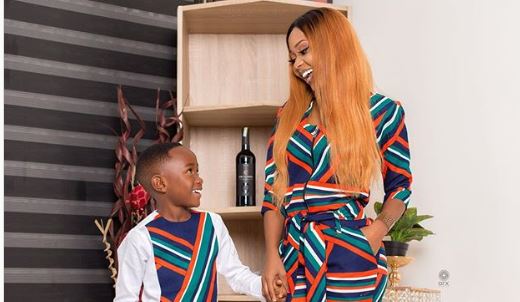 Ghanaian Actress, Rosemond Brown, popularly known as Akuapem Poloo, has apologised for a nude picture with her son posted on social media to mark his seventh birthday.

Ms Brown came under fire after the nude surfaced on her Instagram page for what many called ’insensitive’ and abuse of the boy’s rights.

The picture depicted the actress in nudity as she squatted before her half-naked seven-year-old son, holding hands.

Defending her action in the comment section of her post, the actress said, “I was not completely naked. He did not see my organs because I covered myself with a cloth and applied sellotapes to the necessary parts. Besides, the picture was taken in my own house.”

She maintained the attention should be directed at the ‘knowledgeable’ caption rather than the photo, adding that people will appreciate the photo if only they understand her message.

According to the child rights organisation, the issue amounts to the breach of the Welfare Principle of the Children’s Act.

“As a child rights organisation, we deem this act as a violation of the Welfare Principle of the Children’s Act and abuse of child’s rights to privacy and dignity.

“We wish to notify your esteemed office to investigate the taking of the said images and its circulation,” a statement by the organisation said on Tuesday.

The actress, in a new video on her Instagram timeline, made a U-turn and apologised for the conduct.

But she maintained the act sought to teach the public about caring for parents, adding that it was to get wards to do more for mothers, especially, regardless of their deprived state.

“What I was saying was that, no matter how naked you see your parent, don’t run away from them. Get close to them and cloth them,” she said in the video.

According to her, the image was an ‘artistic impression’ to get the message across but it did not sit well with a section of the public.

She, nonetheless, apologised for her action which she said was not to arrive at any ill-motive.

“I am so sorry that if I hurt anyone with my post this morning. I also want you to know that it wasn’t made with a bad intention,” she said.

WHO warns against use of masks during exercise