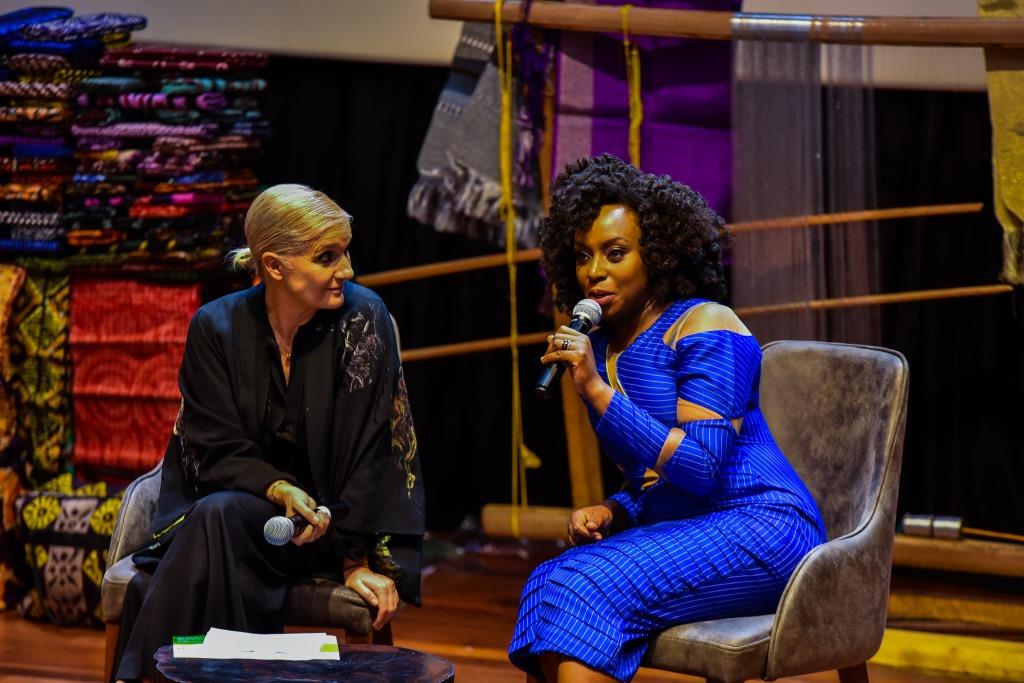 The event was tagged an evening with ‘Maria Grazia Chuiri and Chimamanda Adichie in Lagos’.

Ms Chiuri, who is Dior’s first female creative director, has over 25 years’ experience in the industry, including an eight-year tenure as co-creative director of Valentino.

It featured a masterclass, an exhibition as well as a question and answer session which saw Adichie and Chiuri field questions from fashion designers and the audience alike.
The event was a creative fusion of Nigerian fashion and culture.

During her remarks, Ms Adichie explained that the event was to celebrate the creativity of Nigerian fashion designers whilst providing a platform for local talents to gain international industry insights.

Guests at the events included leaders from corporate Nigeria, the diplomatic corps, the media, entertainment and fashion industries.

Although the event was by invitation only, members of the public were also given the opportunity to attend.

Fans had a great time meeting and connecting with Adichie and Chiuri.

The event was hosted by comedian Bovi, with a live performance by Nigerian singer/songwriter, FALANA.

There was also a reception with a ‘wear Nigerian’ fashion showcase which saw both personalities speak about their individual fashion journeys.

Chiuri, who was awarded, France’s highest honour, the Légion d’honneur, in July 2019, openly admitted to being inspired by Adichie’s style and fashion sense.

For her debut fashion show as Creative Director of Christian Dior held on September 2016, Chuiri got the fashion community buzzing after she featured a T-shirt with inscriptions from Adichie’s popular TED Talk, We Should All Be Feminists.
Chiuri also complimented the Nigerian brands featured in Adichie’s Wear Nigerian project.

Popular Nigerian designers like Atafo, The Lady Maker, Lola Baej, Emmy Kasbit, Kiki Kamanu, FIA Factory, The Wuman Brand and Meena Official also showcased their collections at the Wear Nigerian mini-fashion show, which took place at the gala night:
Chiuri and Adichie were later hosted to a cocktail reception by the French Network-represented by the Ambassador of France to Nigeria and ECOWAS, Jérôme Pasquier, and Consul General of France in Lagos, Laurence Monmayrant.

The reception was organised in collaboration with the Consul General of Italy in Lagos, Maurizio Busanelli.

It was held at the Alliance Française/ Mike Adenuga Centre, in Ikoyi Lagos.

In their remarks, fashion enthusiasts at the gathering noted that Nigeria is positioned firmly in the heart of Africa’s fashion scene, and hoped that Chiuri’s visit to the country will unlock more opportunities for its new crop of fashion designers to get the chance to collaborate with a global powerhouse such as Dior.

Adichie’s affinity for Nigerian fashion is no secret.

In the last few years, the famous writer has literally taken on the role of ambassador for the Nigerian fashion industry. This has seen her patronise indigenous designers, wear their clothes, promote and give these brands more visibility and global recognition through her Wear Nigerian project.

In a statement made via her Facebook page, she said “If we are to grasp for a silver lining, then the ‘Buy Nigerian to Grow The Naira’ rhetoric is one. In that spirit, I recently decided to wear mostly Nigerian brands for my public appearances.”

Three years later, Adichie continues to rock only Nigerian-made creative outfits from the likes of Grey, DZYN, Gozel Green and many others.

Check out photos from the event below: