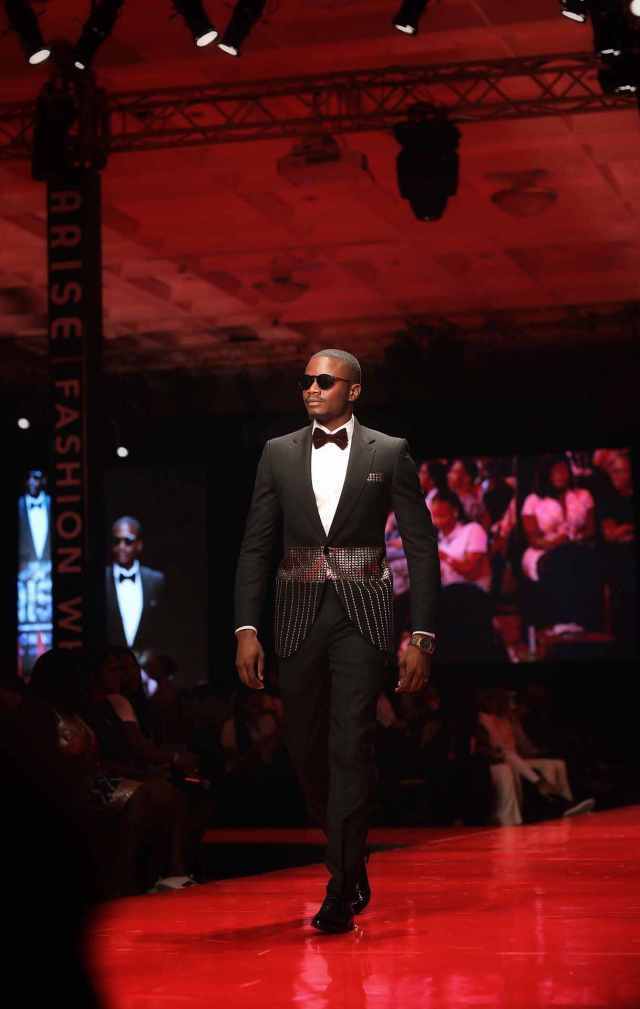 Every fashion designer’s ultimate dream is having an A-lister rock their design on the red carpet of a major award ceremony.

Adepoju Adesola was not an exception. So, when she was approached by former Big Brother Naija housemate, Bamike Olawumi, popularly known as Bambam, to design her outfit for the Africa Magic Viewers’ Choice Awards (AMVCA), she knew her brand, Jahdara, has finally “arrived.”

Bambam, who is one of the break-out stars from the Big Brother Naija show is currently highly sought after by Nigerian fashion designers, stylists and filmmakers.

The Africa Magic Viewers’ Choice Awards is an annual accolade recognising outstanding achievement in television and film, voted on by the general public.

Ms Adesola quickly put together a glam squad, which chose to style the reality TV star in a green-feathered dress with Swarovski crystals.

The team thought the dress was going to arrest the most attention of the night. It did.

But, like it is often the case at glamourous events involving celebrities and snazzy attires, it was not for the reason the stylists at Jahdara had expected – though Bambam trended on social media, but her mentions were inundated with criticism of the outfit, rather than admiration.

But in a twist of showbiz quirkiness what many thought was a career denting outfit has made earned Ms Adesola a lot of media mentions.

Ms Adesola is just one of the many Nigerian fashion designers who has award shows to thank for their growth.

Much Ado About Red Carpet

Forget the nice speeches, the teary eyes as artists accept gleaming trophies, don’t mind the often political incorrect and recycled jokes by comedians and comperes, fashion has always been the bait that attracts attendees and viewers to celebrity award shows.

The popularity of award-show fashion has practically eclipsed the award shows themselves.

Cable television channel DSTV understands this and rightly dedicated a channel to transmit the goings-on on the red carpet, where stars pose, smile, giggle as camera captures the exquisiteness and sometime, the outlandishness of their attires.

Naturally, the red carpets is the market place for designers and they understand how important it is for them to always put their best foot forward.

While the awards take place inside, much of the publicity and excitement takes place on the red carpet with fajournalists discussing, what designers are being worn by which stars and photographers taking pictures.

In Nigeria, the red carpet is now a spectacular international product placement arena of great importance to the fashion industry.

“A photo of a celebrity outfit on a best-dressed making the best-dressed list at an award can be a complete game changer,” says celebrity stylist, Ifan Micheal.

He notes, “An inclusion in the best-dressed list does not only pave the way for brand ambassadorships, as it did for BB Naija star, CeeCee, it can also play a small but significant role in creating better opportunities for fashion designers.”

Oftentimes, designers pay celebrities and their stylists for a certain dress or jewelry to be worn at a big event.

The amount charged largely depends on the star power of the celebrity, some stylists who spoke with PREMIUM TIMES disclosed.

“Some celebrities are commissioned to wear an outfit and these designers go through the stylists who in turn convinces their client to accept the offer.

“In most cases, this happens when both parties are striking an agreement for the first time. If everything goes as planned, they wont have to pay the celeb to wear other outfits as long as they are tagged and mentioned on Instagram and during interviews.

“These red carpet outfits don’t come cheap at all. They cost as much as N1 million while the cheapest range between N50, 000 to N200, 000 and this depends on the designer, the fabric and the star whose will rock the outfit,” says fashion publicist and socialite, Azuka Ogujiuba.

While Nigerian stylists are not willing to share intricate details, their Hollywood counterparts are a lot transparent with the figures.

During a recent interview with businessinsider.com, celebrity stylist, Jessica Paster admited that brands often pay to be showcased on the red carpet.

“If someone shows up to the Oscars in a black dress and huge statement necklace, chances are they’re being paid by a jewelry company.”

Three designers have ruled the AMVCA/HEADIES red carpet in the last couple of years. They include Lanre Da Silva, Ejiro Amos Tafiri and Mai Atafo.

These three fashion houses have presented some of the most daring and creative designs on the awards red carpet. Some of Nigeria’s biggest stars, including Rita Dominic, Waje and Tiwa Savage and more, have all worn their creations.

But other big names in the Nigerian fashion scene are constantly being put on their toes as they are facing stiff competitions from upcoming designers like Ms Adesola.

One of such designers is Sandrah Tubobereni popularly known for her eponymous brand, Tubo. She debuted her fashion career in 2014 and was responsible for the custom-made marble print dress Ms Dominic wore to the AMVCA.

In the last two years, a number younger designers have stepped up to the plate and are doing everything to sell their crafts to the world.

Some celebrities are now abandoning their former designers for these rising and enterprising fashion stars. For instance, it was the first time Rita would wear a design by a young designer at a major award like the AMVCA .

“Let’s just say both the old and new designers are struggling for celebrities,” says Azuka.

“But some old designers already have their stars already. This time around Rita did not wear Lanre Da Silva this time around, she wore someone else’s. I can’t really say if they still have that loyalty and I don’t think it really counts.

“Everything depends on the celebrity’s mood and the designer. Maybe someone introduced Rita to Tubo, for her to wear her outfit for the AMVCA. I feel Rita’s outfit was one of the best of the night.”

While some stars take the shine on the red carpet, only a few are aware that they are sometimes allowed to “borrow” a designer dress, handbag or diamond-studded necklace for the night for free of course.

To the designers, it’s in the exchange of getting their name in the red carpet photos in the media.

“The impact of a dazzling red carpet appearance can include increased media coverage and a surge in social media followers. The result can be a heightened and more bankable profile for both the designer and his or her muse.”

So, what happens to these outfits after the curtains are drawn?

“Some of them don’t wear them again, they leave them in the wardrobe, some of them return the outfits to the designer and another celebrity can then decide to wear them to another event.

“Some other persons might want to buy it off from the designer. For example, the green Lanre Do Silva empire dress I wore to the AMVCA, Sen. Ita Giwa ordered three different colours from her after she saw me in the outfit,” explained Azuka.

Over time, the media scrutiny on the best and worst dressed lists have also made an impact on the fashion industry since entertainment awards became widely accepted in Nigeria.

“In fashion circles, the choice of an award worthy outfit is almost as important as an award-winning role in itself,” says Funke Osai-Brown, publisher of The Luxury Reporter.

“We all know how Nigerians have always loved the luxury and even when they can’t afford it, they go for what is now known as affordable luxury. This is why millions can be spent to design an eye-popping red carpet outfit, which cannot be worn twice.

“What starts as million naira investments into a single outfit for a designer becomes what they are remembered for.

“But it’s not exclusive to Nigeria alone. We have read about how the likes of Kim Kardarshian and Beyonce can splurge millions of dollars on a Givenchy or Gucci outfit. It’s called star power and trust me, Nigerian designers are very modest compared to their foreign counterparts.”

From Nigeria To The world

The latter is not a newbie to the world of celebrity styling, as she has also dressed the likes ofMichelle Obama and Kenyan Oscar-winning actor, Lupita Nyong’o.

Ms Osakwe has become one of Nigeria’s most celebrated designer, with work exhibited in the Museum at the Fashion Institute of Technology, in New York; the Vitra Design Museum, in Germany; and the Brighton Museum & Art Gallery, in England.

Others like, Jewel By Lisa, Duro Oluwo and Ikiré Jones are also recognised outside the shores of Nigeria.

Nigeria’s burgeoning fashion sector is enjoying an unprecedented level of exposure that translates into unique opportunities for designers.

A decade ago, nobody would have imagined that international celebrities like Beyonce would be proud to wear Nigerian designs.

It’s not surprising to hear, Nigerian celebrities respond to the all so popular red carpet question, “Who are you wearing?” and mention, “ Style Temple”.

The latter is owned by an Abuja-based designer, Ogogua Okonkwo.

Some of her celebrity muses include, Toke Makinwa, Zainab Balogun and Stephanie Coker. Most of her clientele are the northern elite and her prices range between N15, 000 to N200, 000 per oufit.

In spite of the attendant challenges, Nigerian fashion designers have remained resilient and innovative.

“I say that because right now they have a lot of clients. The only thing that will earn them international recognition going is the quality of their designs. If they don’t produce quality there is no way they can get out there. I understand that power is a major issue. This is why South Africans are already ahead of us because power is not an issue.”

The red carpet as we know it has gone far beyond just a neccesarry event prop where stars showcase their killer outfits, dedut their ‘new body’ and excusite jewellery.

The carpet really is where new stars are born and where brand ambassadorial deals are decided upon.

It is also where young and burgeoning labels are managing to compete for the attention of celebrities and international recognition.

The AMVCA may have come to an end but the red carpet dresses will remain topics of discourse for many months to come.

Mr Okeugo concludes aptly: “Although the fashion industry is still in infancy, it has started to expand; our government really needs to pay more attention to our fashion industry, which like Nollywood is an untapped gold mine.”

SPECIAL REPORT: How children battle for survival in Oyo capital