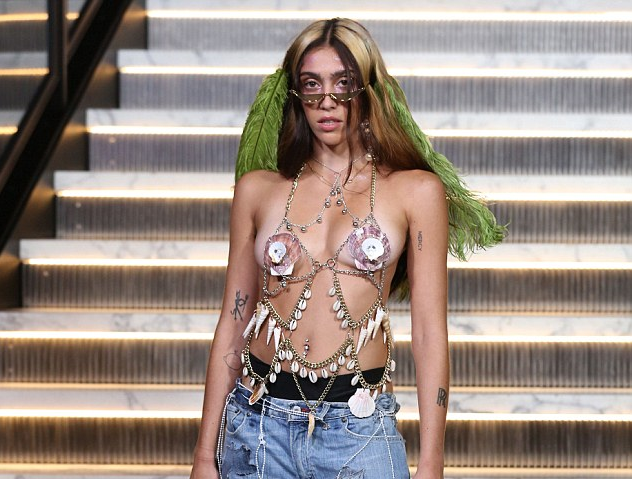 Lourdes Leon, the daughter of pop icon Madonna, has made her debut on the runway for the Gypsy Sport Spring Summer 2019 showcase at the New York Fashion Week (NYFW).

The model walked the runway wearing a beaded shell body chain bra, ripped jeans, a headpiece made from bright green leaves and a chunky sneakers.

Leon’s look was accessorised with a Miniscule sunglasses placed at the tip of her nose.

Although this was her first time walking the runway, she recently modeled for the` Converse Made Me’ collaboration and starred in an ad campaign for Stella McCartney’s Pop fragrance.

While this may be her catwalk debut, this is not the first time Leon attended the NYFW.

The News Agency of Nigeria (NAN) reports that the model sat front row alongside her mother at the Alexande Wang’s Spring 2017 show and later attended the Wang Fest after party.

Leon is Madonna’s eldest child whom she shares with Carlos Leon.

She recently graduated from her mothers’ alma mater, the University of Michigan.

Leon is one of the six children of Madonna; 18 year old son, Rocco Ritchie and four other children she adopted from Malawi, David, Mercy, James and 6 years old twins Estere and Stella.

2019: Bafarawa speaks on purchase of nomination forms for Buhari, Atiku, others