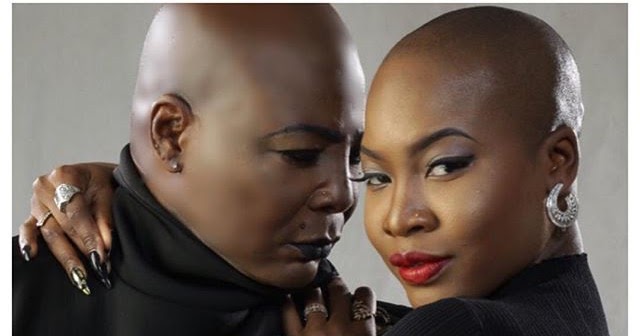 Charly Boy and his daughter, Dewy

Charly Boy’s daughter, Dewy Oputa, revealed that she is a lesbian on Instagram this past weekend.

She made this known on Instagram by sharing photos and a video of herself and her girlfriend. Her famous father has also vowed to defend lesbian, gay, bisexual and transgender (LGBT) right in Nigeria. He said this on Instagram.

Same-sex sexual activity or marriage attracts 14 years imprisonment in Nigeria, but Charly Boy who, from indications is not himself a homosexual, says he is ready to wear his activism garment again in defense of the LGBT community in Nigeria.

Singer, Harrison Okiri, aka Harrysong, explained why he recorded another version of his hit song, Selense, with Iyanya and Dice Ailes, and stopped the promotion of the original version, which featured Kizz Daniel and Reekado Banks.

“We tried to sort out the issue between both of them so that we could shoot the video but Daniel refused vehemently; he didn’t want any reconciliation”.

Nollywood actor, Jim Iyke, has launched a virtual application, which provides users with the opportunity to source for artisans who can render any kind of service.

The actor said the app known as ‘Oga Work’ is especially designed for artisans who have a passion for their crafts but do not have a space or a store but crave for their services to be offered to end users.

According to Jim, the innovative idea of the app is to solve the issue of unemployment in Nigeria.

MI Abaga, rapper and record label executive, has released the video for ‘Brother’, four years after the song was recorded.

‘Brother’, which featured Nosa and Milli, was released on the rapper’s 2014 album ‘The Chairman’.

The emotional song told the story of the Choc Boiz, which comprised of Jesse Jagz, Ice Price and Brymo, and their much-publicised falling out.

On the song, the ‘Bad Belle’ rapper sought to mend fences with the crew after they all went their separate ways.

Abaga said the video was shot after the song came out, but he held back on releasing it.

The N50 million libel suit filed by Innocent Idibia a.k.a Tu Baba/ 2 Face, against a former colleague, Ahmedu Augustine a.k.a.Blackface has been referred to Alternative Dispute Resolution (ADR) for adjudication and resolution.

Both 2Face and Blackface are members of the defunct Plantashun Boiz. The suit, which was filed through a “Writ of Summons” February 28 at the Lagos High Court, Ikeja division was given a temporary file number. Idibia and his manager, Efe Omorege, are claimants while the lone defendant in the matter is Ahmedu Augustine also known as ‘Blackface’. They are claiming N50million as damages for alleged defamation of character by the defendant.

Augustine was alleged to have claimed that 2Face did not write hit songs, “Let somebody love you” and “African Queen”, a claim which was denied by the claimants on their respective internet platforms.

A date is yet to be fixed for arbitration in the suit.

Nigerian filmamaker, Kunle Afolayan, has added a vintage 1965 Ford Thunderbird to his collection of cars.

Sharing the image of the maroon-coloured car which bears ‘IRE OO’ as the license plate on Instagram, the 1964 to 1966 model is the fourth generation of the Ford Thunderbird. It has a V8 engine which pushes the car to 60 mph (96 km/h) in nearly 11 seconds.

Afolayan also has a vintage Mercedes Benz with the licence plate, ‘OCTOBER 1’ named after his popular movie of the same name.

However, to keep in vogue with modernity, Afolayan, who is Peugeot ambassador, also drives a Peugeot 605-saloon car, which has ‘THE CEO’ on its license plate.

Nollywood actress turned evangelist, Eucharia Anunobi, has revealed that being a pastor doesn’t stop her from acting roles given to her.

The actress said this while reacting to reports that she has stopped acting. Speaking to the Punch newspaper, she said, “Some people think that when you become a minister of the gospel, you are not supposed to have a career. However, being a minister does not stop you from working.

“Since I started acting, I have never taken a break and I am not going there. I think what caused this misconception is that because of the activities of pirates, many movie producers were not publicising our works. So when people don’t see you in movie adverts, they think that you are no longer on the scene.

“As a matter of fact, I just got back from set. Even as a pastor, I can still act a movie like Glamour Girls because my individuality is different from whatever character I portray in a movie. I always tell people that undue exposure of the body that does not add to the story doesn’t make sense.”