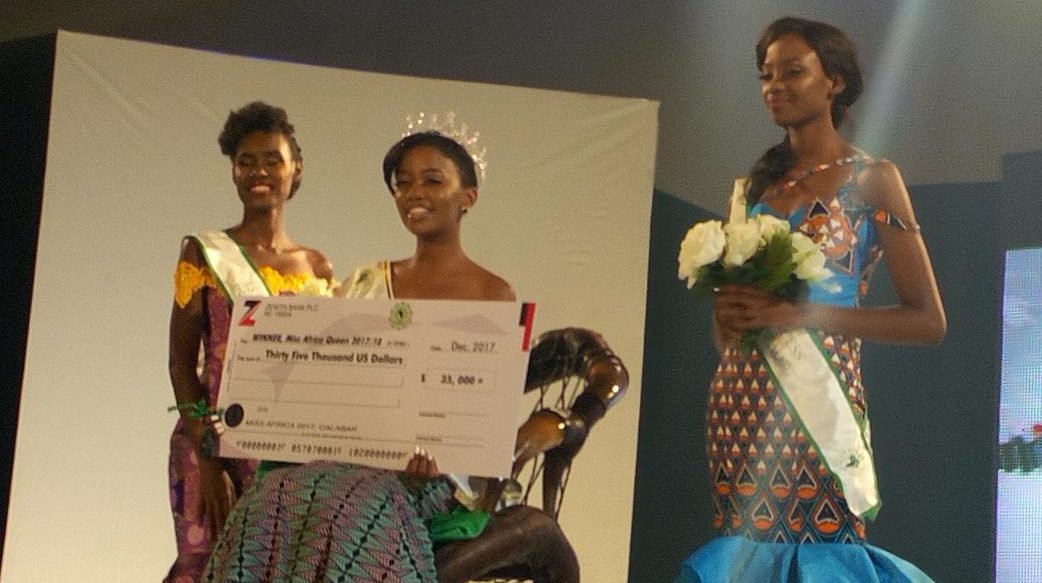 Winner of the Miss Africa 2017 beauty pageant, Queen Gaseangwe Balopi of Botswana (M), displays her cheque of Thirty Five Thousand US dollars during the Miss Africa 2017 beauty pageant at the Calabar International Convention Centre in Calabar on Wednesday (27/12/17). With her are the first runner-up, Queen Fiona Naringwa of Rwanda (L); and the second runner-up, Queen Luyolo Mngonyama of South Africa.

Balopi emerged the 2017 African queen at the keenly contested event after a fourth round of appearances in different attires by 25 contestants.

NAN reports that the red carpet event started at round 10.45 pm on Wednesday night at the Calabar International Convention Centre and ended around 3 a.m. on Thursday morning.

She is to take home $35,000 and a Ford Edge Sport Utility Vehicle as her star prize.

Gov. Ben Ayade said the theme of the event `Climate Change and Migration’ was chosen to create awareness on the need to protect the environment and caution youths against illegal migration.

Mr. Ayade said the event afforded the African continent the opportunity to choose another beauty queen that will use her beauty to create awareness on the need for Africans to see themselves as one.

“Migration and Climate Change have become burning and global issues today. Our gathering here today is to choose another African queen that will use her office to create awareness on the theme.

“Blackness is now a perception, beauty and character in the eyes of the people. The Miss Africa pageant is meant to tell the true story of Africa to the world.

“How can a continent like Africa that is blessed with abundant natural and human resources be poor? Africans are intellectually sound.

“We are not gathered here to pick the most beautiful woman, but rather, we want to pick the true African woman who can use her beauty to change Africa.

“For us to tell the true African story, we need a face that is appealing.

“Our theme for this year should caution our youths about the tedious journey through the Mediterranean Sea and Sahara Desert to Europe in search of greener pasture,’’ he said.

Motswana Balopi promised to use her crown to create awareness on the dangers of illegal migration by youths across Africa.

The former Miss Africa, Neurite Mendes, from Angola, urged the new African queen to use her office to end illegal migration by some Africans to European countries.

Former Governor of Cross River, Donald Duke, Speaker of the State House of Assembly, John Gaul-Lebo, and other dignitaries were in attendance at the event.

UPDATED: Buhari’s son, Yusuf, yet to be flown abroad, still at Abuja hospital