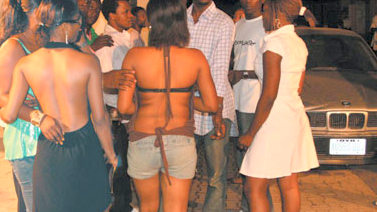 A group of girls used to illustrate the story

About 24.2 percent of women resident in Lagos State have their first sexual intercourse before the age of 18.

The Lagos State Commissioner for Health, Jide Idris, disclosed this at the first Lecture and Award Series, 2017 organised by Inspiration 92.3 FM. The event held on Thursday at the Nigerian Institute of International Affairs, Victoria Island, Lagos.

Mr. Idris, who spoke on “Reproductive Health: Beyond Cultural Limitations and Concerns,” said the figures were derived from a National Demographic and Health Survey and the Multi-Indicator Cluster Survey conducted recently.

He noted, “On the national level, the survey showed that 51 percent of Nigerian women have their first sexual intercourse before they turn 18. This implies that in Lagos, one out of every four women would have been exposed to sex before 18 and the national average for Nigeria is one of two women. The difference in these figures might be attributed to several factors, such as female education, urbanisation, childhood marriages and so more.”

Mr. Idris also revealed that with the average age at first birth pegged at 20 years; about 22.5 percent of these pregnancies are by teenagers in Nigeria.

“More worrisome, however, is that reports have shown that as at this year, about 40 per cent of women in the Southwest have experienced physical violence since age 15 and sexual violence cannot be excluded from these statistics.

“In other words, in a nation where more than 60 percent of its population are young people and significant numbers of these young people are exposed to sexual intercourse at an early age either voluntarily or violently, a lot of potential problems emerge. Such problems are associated with sexually transmitted infections, childhood pregnancy, trauma and its accompanying physical and mental health implications,” he stated.

Speaking further, the commissioner added that young ladies must have access to knowledge about sexual health and systems that modify behaviours, as well as, access to services that prevent and manage them.

Others are human rights, existing laws, policies, regulations and strategies, among others.

Mr. Idris highlighted increased investment in health, good governance, social and economic empowerment of women, strengthening health services and development of rights based code of ethics as some of the solutions.

Also lending her voice to the discourse, the representative of the Acting Director General, National Agency for Food and Drug Administration and Control, Bolaji Abayomi, advised mothers to practice exclusive breastfeeding in the first six months of giving birth.

She also advised that they breastfeed their babies for three years. In addition, she charged mothers to introduce supplements to their children to boost their immune system.

In his remarks, the Chairman of Amazing Inspiration Media, Erastus Akingbola, who was represented by Soni Irabor ,said the lecture was borne out of the need to contribute to the issue of healthy living among the people.

He said, “The best approach to solving issues around reproductive health is to establish forums for people to deliberate on pressing issues. Our radio station has a passion for every segment of the society. We have also realised that we need to accord priority to the well being of Nigerians by providing them with swift and genuine information on how to address their health challenges.

2018 Hajj: Saudi authority fixes May as deadline for registration – NAHCON