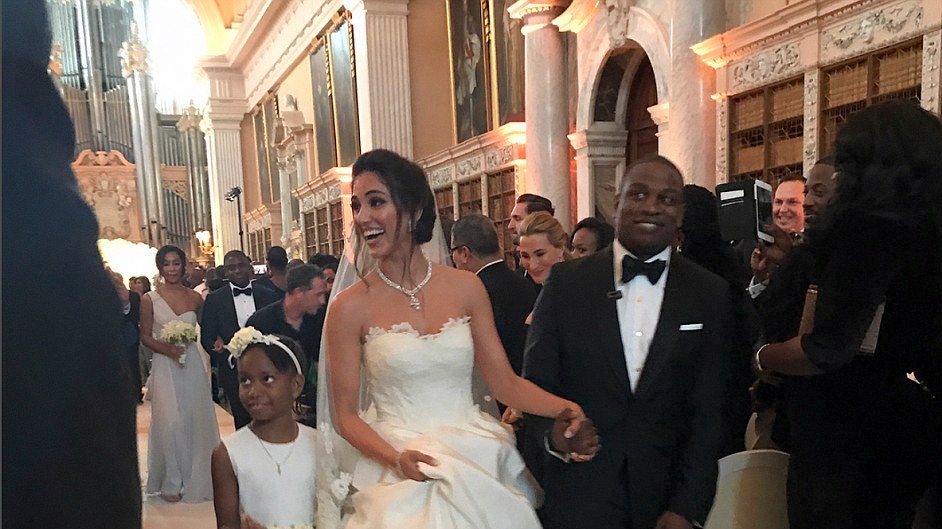 The wedding between Folarin, the son Nigeria’s richest woman, Folorunso Alakija, and Iranian beauty, Nazanin Jafarian Ghaissarifa, is reported to have cost £5 million.

The groom, a father-of-one, is an entrepreneur, investor and cinematographer who lost his first wife to cancer.

Folarin’s new wife studied Bioengineering and Biomedical Engineering at the University of Manchester.

The pair became engaged last year and had a traditional Nigerian wedding in Lagos in November.

The wedding was celebrated with a lavish bash at Blenheim Palace in Oxfordshire, in England over the weekend.

Regularly used as a film location, the Blenheim Palace has been seen in Hollywood blockbuster movies like Harry Potter and the Order of the Phoenix, Rogue Nation, Cinderella and the upcoming Transformers: Revenge of the Knight.

The cost of hiring the whole Woodstock wedding venue, which is the ancestral home of Sir Winston Churchill, is only on application but hiring just the palace and state rooms costs £33,000 (N15 million).

Prices start at £300 per tier and Elizabeth’s clients include British, European and Middle Eastern Royalty, celebrities and high net worth individuals.

The wedding, which had all the trappings of opulence, has remained a topic of discourse on social media owing to the sheer display of wealth and luxury.

Their wedding story is currently trending on social media. It has emerged that the wedding had one million roses which were done by Jeff Leatham. The latter commands up to £250,000 (N114million) for flowers and has worked for the likes of Madonna, Oprah and Tina Turner.

Mr. Leatham was also the man behind the flowers at American actress, Eva Longoria and Tony Parker’s wedding.

With eight tiers on their cake, they would have paid for their magnificent cake around £2,400 (N1.1million) – and that’s excluding the elaborate iced flowers and doves. This is according to wedding planners sampled by DailyMail.

Guests at the wedding were also treated to a surprise performance from Blurred Lines singer Robin Thicke, who reportedly costs around £150,000(N68.2million) to hire.

Apart from the magnificent firework display in the hotel grounds later in the evening, the A-list guest list included amongst many, Victoria’s Secret Angel, Shanina Shaik.

The bride stunned in a traditional strapless white gown with lace embellishments.

She accessorised her look with a dazzling diamond necklace and white Manolo Blahniks. She later changed into a racy floor length white gown with sheer panelling.

The mother of the groom is the richest Nigerian woman and one of Africa’s richest women world with an estimated fortune of $2.1 billion. In 2014, she knocked Oprah Winfrey off her post as the richest woman of African descent in the world.