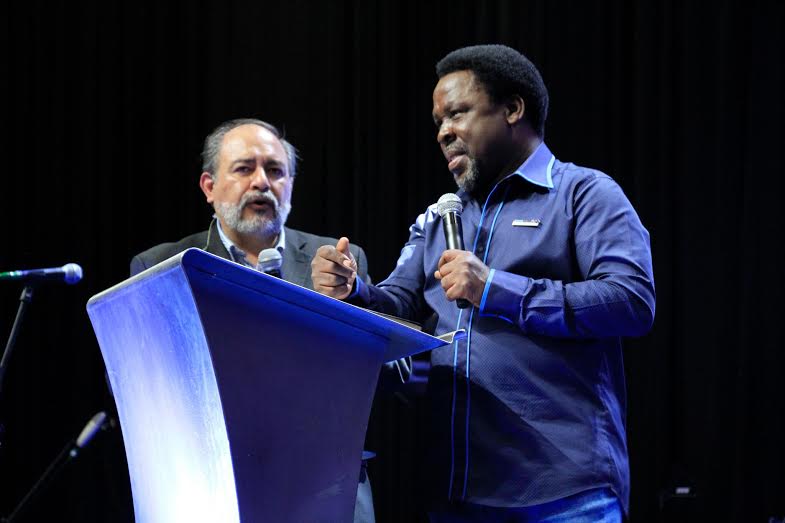 TB Joshua to get huge birthday bash in South Africa

A huge birthday celebration is set to be held in South Africa on Friday 12th June as Nigerian ‘Prophet’ TB Joshua turns 52.

An announcement posted on Joshua’s official Facebook page revealed that award-winning US Gospel Artist Vashawn Mitchell would be among those performing at the event.

The Nigerian cleric’s popularity in Southern Africa has shown no signs of waning, despite the tragic building collapse that claimed the lives of 84 South Africans in his church last year.

Indeed, family members of those who lost their lives and survivors of the incident are among those organising the celebration for Joshua, alongside ‘The SCOAN Family in Southern Africa’.

Joshua has uncannily not appeared in public since his crusade in Mexico last month.

It was announced on his Christian network Emmanuel TV yesterday that the cleric had arrived back in Nigeria over a week ago but was “waiting for God’s command on what to do next”.

Speculations are rife that Joshua may soon be leaving Nigerian shores on a more permanent basis, fuelled further by the message yesterday which stipulated no birthday celebration would be held within Nigeria.

Nigeria’s tourism board will likely be unimpressed by the announcement as last year over 5,000 foreign pilgrims made the journey to Nigeria to celebrate with Joshua.

Official figures revealed two years ago that 6 in every 10 visitors to Nigeria are bound for The SCOAN.

“I am not surprised TB Joshua does not want any celebration in Nigeria,” an aggrieved fan wrote on Joshua’s Facebook Page yesterday. “After all, they attacked his church and then tried to frame him in the court – what a disgrace!”