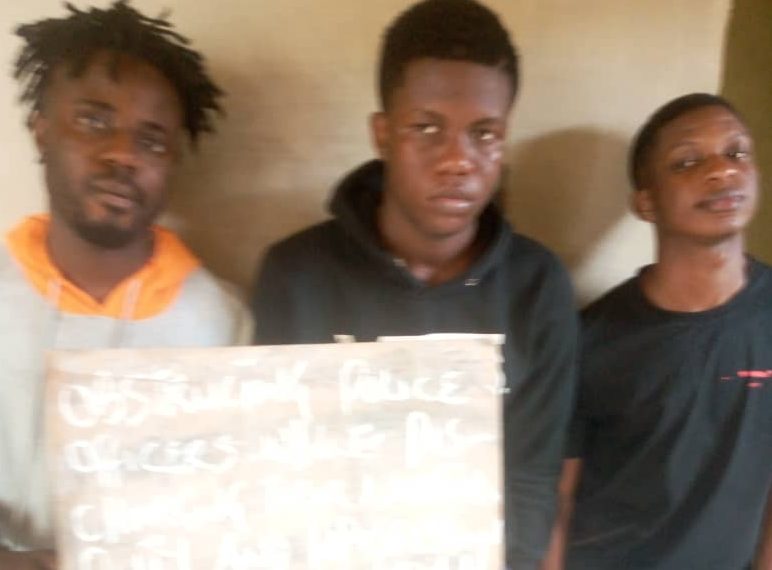 Superwozzy (pictured first from left in dreads) was arrested alongside two other persons, Okoh miracle (18) and  Shonaike Adebola (20).

The police in Lagos, on Thursday, arrested a musician, Superwozzy, and his crew around the Ogudu area of the state and allegedly recovered assorted charms and marijuana.

Superwozzy, 24, who is an indigenous rapper, real name, Awodoyin Mayokun, was arrested alongside two other persons, Okoh Miracle, 18, and Shonaike Adebola, 20.

The Lagos State police spokesperson, Olumuyiwa Adejobi, told PREMIUM TIMES that they were intercepted in a Chevrolet saloon car with Reg. No SMK 436 DE, at about 9.30 a.m., on Friday by a team of anti-crime patrol from Area H.

The singer who released his debut album, a 5-track EP titled Get Layd in 2020, is best known for his single, ‘Gratitude’ featuring Barry Jhay.

Superwozzy had earlier released a video, which has since gone viral, on Friday, where he alleged harassment, excessive use of power and attempted extortion by the police when they were intercepted.

Reacting to his claims, the police spokesman debunked the allegations and urged the general public to disregard the video, which he described as “mischievous, baseless and an attempt to paint the police black.”

Narrating the police’s version of what transpired, he said, “The glasses, front and back of the vehicle are fully tinted which aroused the suspicion of the patrol team; and efforts to get the occupants identified was rebuffed, as they refused to come down or wind down the side glasses of the car.

“In a bid to detect and identify the occupants of the vehicle for security reasons, coupled with the police’s experience on criminals’ modus operandi, the patrol team called for reinforcement and eventually, the three occupants were arrested and the vehicle towed to the station at Ogudu.”

During the search performed on them and the car, the police spokesman said a wrap of a substance suspected to be Indian hemp and some charms were recovered from the suspects.

He also added that the commissioner of police has ordered a thorough investigation of the incident, while appealing to Lagosians, particularly, the youth, to always respect the law and surrender for checks at the instance of the police.

He said in as much as the police will uphold the rule of law, protect human rights and dignity, it will not condone dissemination or spreading of fake, unfounded or malicious news to malign the image of the Nigeria police or create security threats in the state.

The police spokesperson also said the singer and his crew were still in detention as of 7:00 p.m. “as the police have a case against them.”

“If they’ll be released, it’ll be on bail, but a decision has not been made on that,” he said.

U.S. mulls policy to limit stay of Nigerian students, others