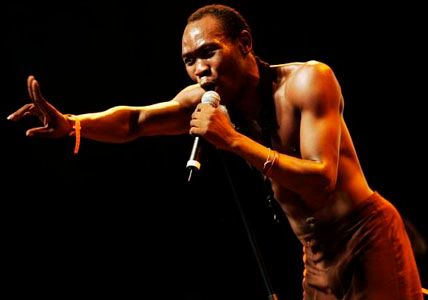 Why no Nigerian musician can be like Fela – Seun Kuti

Seun Kuti, son of late Afrobeat legend, Fela Anikulapo-Kuti, has said that Nigerian musicians that compare themselves with his dad cannot be like him.

Seun, who is the youngest son of the late Afrobeat pioneer, said young musicians are only using his father as an excuse to misbehave and they are not actually like him.

The 37-year-old saxophonist shared this view during an Instagram live session with a talent manager, Ubi Franklin, on Thursday.

During the chat, he said most Nigerian artistes are only like his father in some aspects.

“I think most of them are from Muslim and Christian homes and need Fela as an excuse to smoke and chase girls. Other than that aspect of Fela, which is a really minute aspect, they use Fela as a reason to be reckless and rude to your elders, because they are not really rude to the authorities,” he said.

He said Fela’s actions were his own way of rebelling against the government at the time.

“All of Fela’s actions, smoking weed and all, -Gowon was a Christian, his deputy was a Muslim, all of them were religious moralists- Fela had women, all of his actions were targeted at the system so rigid and so conservative that even artistry could not even breathe. Fela’s life was a rebellion.

“Suddenly when you’re insulting African women that is the time you want to remember Fela, forgetting that Fela married all of his own, he married them and put them in his house. When you want to smoke weed on the streets and misbehave, that is when you want to channel Fela but never in the aspect of liberating your people. What I really don’t like is when they are now taking Fela’s messages and turn it into some kind of capitalist commercial message. Those things are not really what my father was about,” he said.

The singer added that Fela’s music was targeted at confronting the people in authority and was never used to talk down on the people on his level or below him because those were his people.

He, however, said the current musicians never challenge the authority, they are “very humble, shaking hands and bowing heads” when they meet the higher-ups.

“Fela’s actions were targeted at the authorities. Ascending, never to the people on his level or under him. Those were his people that he was fighting for. Fela never spoke down on Nigerians. Ascending, that is the only time that an African man is allowed to be rude,” he noted.

Seun, who is also walking the path of his late father as an activist, said he believes that music can be used to air the people’s opinions and musicians can use their fame and pages to get things done.

However, he said artistes worry about things that only five per cent of Nigerians can relate to, while the rest can only fake it or dream to be like it.

“We have to make sure that our hearts begin to represent our people. We don’t have to become like Fela or be on the streets and form a political party but your heart has to represent your people.

“Even the musicians at the top, we are still competing ferociously because even up here, things are scarce. For me, artistes don’t have to be activists, you just have to represent your people,” he said.

The artiste said music does not really feed a lot of Nigerian artistes but is just an avenue that they use to earn a living by becoming products that can be sold to big corporations to make money.

“I think the problem with doing shows in Nigeria is that Nigerians cannot afford the kind of tickets that will make artistes rich. Even when we do shows in Nigeria, we have to try and sell the shows to corporate bodies who will buy few tickets at exorbitant prices,” he said.

He added that entertainers in Nigeria have a huge advantage because the elites and big corporations fund the entertainment industry much more than the educational sector.

He noted: “These elites give more every year to our entertainment industry than to education. It is not happening in any country in Africa or anywhere else in the world. That’s why Nigerian artistes are able to punch so high above their weight.

“Let’s stop telling the whole world how we are the best musicians in Africa, that’s bull. All African music is great; the reason the loudest music comes out of Nigeria is that we got the biggest funding behind us.”

The singer said he believes weed (marijuana) should have been legalised all over the world and not just in Nigeria. He said weed would probably have been legal in Nigeria but the Nigerian government is yet to receive the “green light” from America and Britain.

“Weed has been growing on earth before man even evolved. For us to now become conscious Homo sapiens, create our countries, create our laws, and then look at something that has been there before us and say you’re not allowed to be here, is just the height of egotistical cultural chauvinism,” he said.

He added that he may be convinced to stop smoking if proper research can be carried out locally in a Nigerian university to confirm that marijuana is bad for health.

“Making weed illegal is like just taking laws that some people wrote and putting it in our heads,” he said.

A number of Nigerian artistes have been compared to the Afrobeat pioneer, Fela Kuti, in terms of musical contents and styles of delivery.

The likes of Wizkid, Burna Boy, Falz, and even Haitian-American rapper, Wyclef Jean, who released a single in 2017 titled ‘Fela Kuti’, have described Fela as the inspiration for their type of music.

Burna Boy was recently trolled on social media for describing himself as the “best since Fela”. He was also termed arrogant by social media users after he said nobody paved the way for him and he became the “Giant of Africa” on his own.