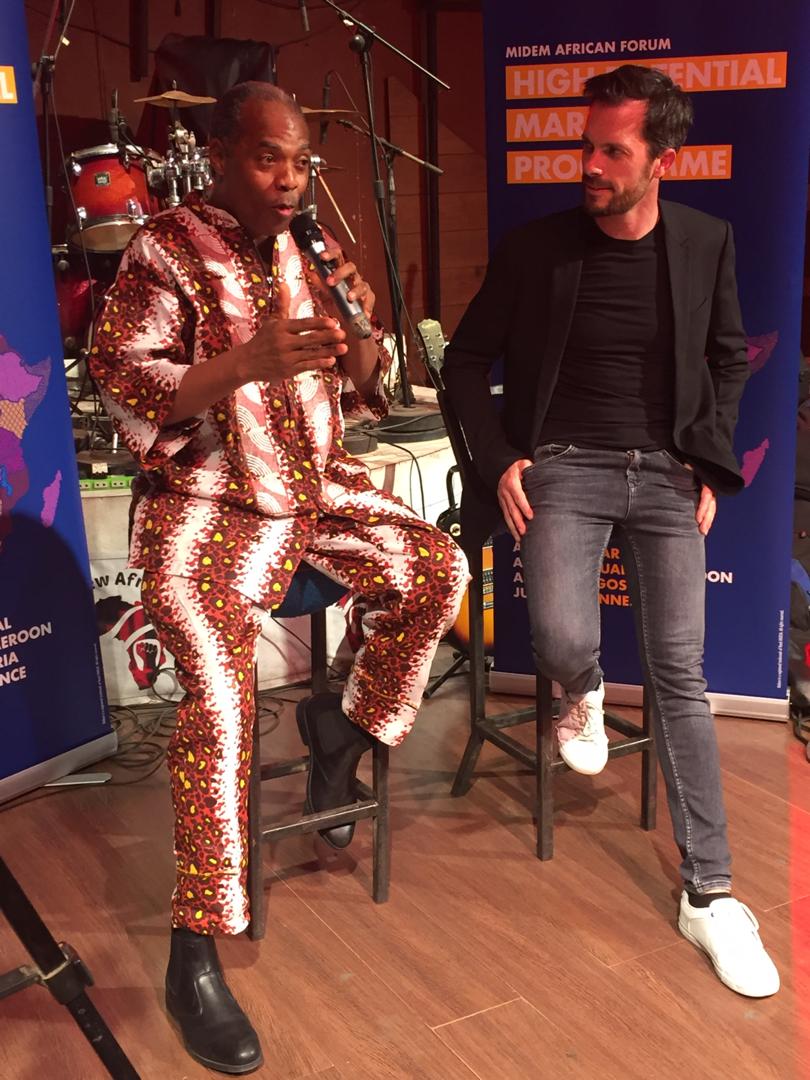 CEO of MIDEM, Alexandre Deniot and Femi Kuti at the Midem press conference at the New African Shrine

Experts at a one-day event have deliberated on ways to position the Nigerian music industry for growth and greater business opportunities.

The event was organised as a channel to individually and collectively change the narrative of Nigerian and African music in the global stage.

The experts, with CEO of MIDEM, Alexandre Deniot, and Afrobeat musician, Femi Kuti, as panellists, spoke about the various challenges confronting the Nigerian music industry.

In his presentation, Mr Deniot explained how the brand was working on strengthening the exchange between national and international executives and sectors to facilitate the structuring of high-potential markets.

He also noted that smartphone penetration in Nigeria and Africa has contributed to the expansion of the entertainment sector.

Femi in his submission, noted that Nigerian musicians are not concerned about the business side of music because they believe it is too complicated.

He also added that hiring the right team is non-negotiable for any forward-thinking musician.

“I had to sign a contract with Motown records because I could not afford to pay for my hotel bills during a show; the business side of the contract wasn’t in my favour and luckily enough Motown crashed. If Motown was still in existence today I would have been in trouble as an artiste.”

Also in his submission, Femi revealed a vital lesson learnt in the early days of his career.

He said, “My other contract was equally terrible even though I produced a hit album ‘’Bang Bang Bang Bang’ but I was desperate and I needed a contract so bad and I didn’t have a lawyer back then to protect me.

“The driving force for anyone to go into music shouldn’t be about fame or money, it should be about the love and passion for doing music so you don’t live a frustrated person fighting record labels in court for many years.”

They all shed light on the relevance of labels set up to deliver 360 deals with the evolution of independent artists and labels in Africa.

Right after the first panel, there was a question and answer session facilitated by Buki Izeogu and Efe Ogbeni of Stealth Management. During his session, the latter spoke about his experiences working with Davido and other stars.

The second panel discussed ‘Charting a course for the African digital market’.

They also discussed ways to apply the tools and concepts to the music industry.

Taiye Aliyu of Effizie Records also shared several ways upcoming talent managers can excel at what they do.

Other areas highlighted include structuring the local industry (regulation, building the value chain and a strong ecosystem) and capacity development (educating artistes, professionals and creating infrastructures).

Activities later moved to the Afrika Shrine, where Femi and Alexandre hosted a media parley and showcase of musical talents.

Pre-paid Metre: What we are doing to meet May 1 rollout deadline – Manufacturer