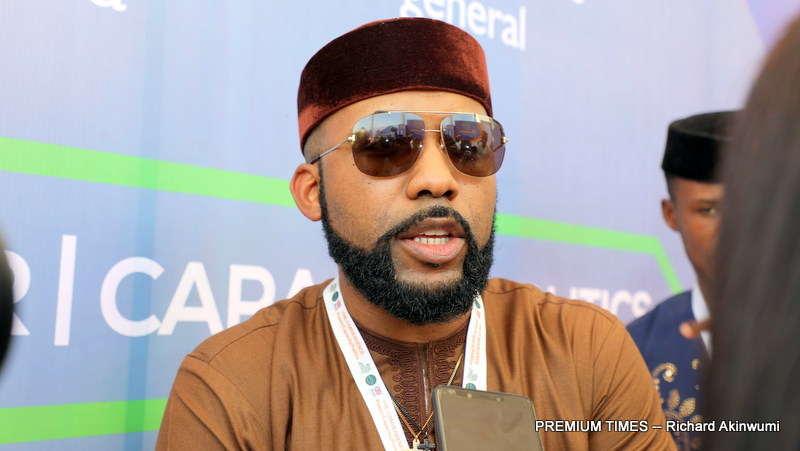 Banky W also said he was willing to publicly delcare his assets if elected to represent Eti-Osa constituency of Lagos in the House of Representatives.

The singer said his destiny is to stay in Nigeria and make his community and the country better.

“For me, it is about destiny and impact. I have lived outside of the country for a little over half of my life and I have had those opportunities and they are still there for me if I wanted to take them but I feel like my destiny is here.

“So, if I run away because life is easier elsewhere, that will be running away from my problems and I am intent on impacting my generation and fulfilling my purpose, that is why I am here,” he said.

He said this shortly after speaking to young candidates at The Convergence – an initiative of Youth Initiative for Advocacy, Growth and Advancement (YIAGA Africa), the Not Too Young To Run movement, one of Nigeria’s largest and most successful youth movement in recent times.

About 400 young candidates of various political parties converged at the conference which is aimed at empowering them ahead of the 2019 general elections.

The event began on Monday, in Abuja and PREMIUM TIMES was present to bring live reports.

Banky W had, on November 11, declared his ambition to represent Eti-Osa Local Government Area in Lagos under the Modern Democratic Party, a political party founded in 2017 by some youth associations.

The party is led by Bukunyi Olateru-Olagbegi, a 27-year-old youth activist and entrepreneur.

In a brief interview with PREMIUM TIMES, he stated that he is not intimidated by the ruling party and other mega parties. He said he has new ideas to bring to the table and the community is ready for new ideas.

“The community is ready for people with vision and the intellectual capacity and for fresh faces on the scene that generally have good intentions for the country.

“For us now, it is about going door-to-door, community-to-community in Eti-Osa and letting them know that they do have a separate option, an alternative that is willing to try to do things differently and hopefully, to do things better.

“At the end of the day, if it’s the will of God and the will of the community, then we willl win but if it is not, then we are okay with that because we have been playing our role in trying to improve our community and that is never going to stop, whether we get the seat or not,” he said.

He explained that the reason he chose to run on the platform of a new party is because his party does not want people to handcuff their message and vision.

“That is (why) we have set up our own political party. We have set up MDP. It is a new party. It is self-funded because we do not (want) to answer to the powers that be. We just want a seat at the table of governance. We want to bring our own chair so that the only people that we will be answering to, are the people who put us in office – which is the community.

“And I think that marks a difference between what we are trying to do and what other politicians are doing.”

When asked if he supports state police, he was affirmative.

“Absolutely. I think that Nigeria is too big of a country to be policed effectively on federal basis. I think that there are so many issues that are going on in our communities now that I think states should have the ability to run their own police forces.

“I know we have really great police officers but I feel like they are underfunded and not really supported and the bad ones make everyone else look bad. So, I think there is some reform that needs to happen in the police as a whole and I would encourage us to look towards state police.”

While stating that he will publicly declare his assets if voted into office, he said he does not have any political god-father.

Banky W is regarded by some as the king of R and B music in Africa.

He is a multi-talented singer who brought one of Nigeria’s most celebrated musician, Wizkid, to the limelight.

He is the chairman and creative director of EME. He is a philanthropist and the brain behind “I am capable” scholarship fund.