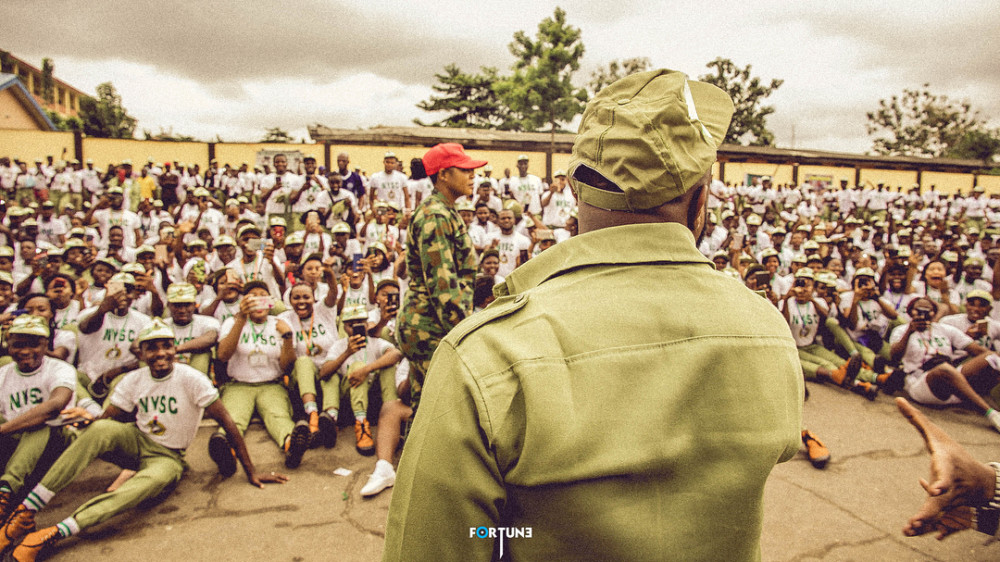 It is official. Nigerian musician, David ‘Davido’ Adeleke, is a corps member. The pop star, who announced on Tuesday, that he had enrolled in the National Youth Service Corp scheme, arrived at the orientation camp in Lagos on Thursday for the swearing in ceremony.

Davido, 26, was one of the 2152 Batch ‘B’ Stream II corps members sworn-in at the NYSC orientation camp, Ipaja.

Davido had earlier tweeted that he chose to serve three years after graduating from the university because he was, “Tying up loose ends.”

His official photographer, Fortune Shotz, shared photographs of the singer registering his details at the camp on Thursday. Upon completing his registration, Davido held an impromptu concert for his fellow corps members.

The personnel had a hard time controlling the corps members just as the NYSC staff could be seen rushing to catch a glimpse of the popular musician.

He was later smuggled through the crowd into an office for safety.

Don jazzy and a host of other Nigerian artistes graced his graduation ceremony.

During an interview with FADER, an American music magazine in 2015, he revealed how he initially dropped out of school in the U.S.

He noted, “At 16, I was taken to the U.S. to get a college degree at Oakwood University, but I wasn’t ready for education.”

He returned to Nigeria in 2011 and enrolled to study music at Babcock University.

Davido released his first single in 2011, while he was still in school (Babcock University).

The National Youth Service Corp is a one-year mandatory service any Nigerian graduate of a tertiary institution below the age of 30 must undergo.

But pundits have said that Davido is simply drawing lessons from the curious case of Nigeria’s finance minister, Kemi Adeosun, who forged her NYSC exemption certificate.

Mr Adeleke, the senator currently representing Osun West in the National Assembly, is alleged to have forged his secondary school certificate.

The senator also falsified his certificate of graduation from Jacksonville State University in Alabama, United States of America. The university has since said he did not graduate from there.

For now, the question many Nigerians are asking is – what next and where will Davido be posted to for his primary assignment?

Man gets life in jail for plot to assassinate Theresa May